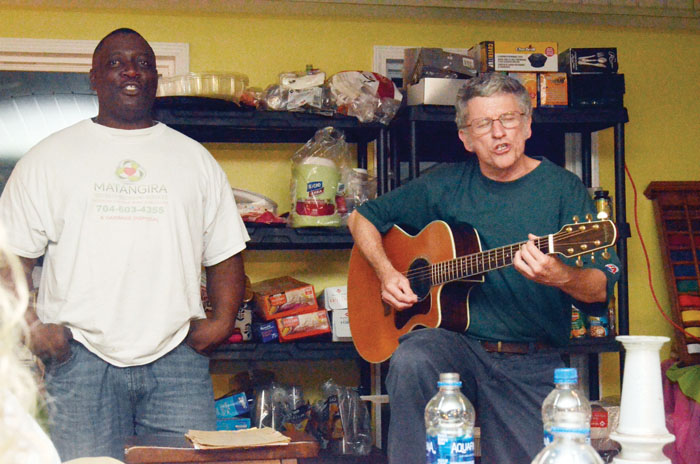 Local businessman and Zimbabwe native Daniel Matangira, left, sings with his former high school teacher, Chris Williams, who he hasn't seen in 28 years. Williams and his wife, Christine, not shown, traveled from New Zealand to be with them.

SALISBURY — It’s been many years since local businessman Daniel Matangira has been home to his native Zimbabwe, but this week a bit of home came to him in the form of his high school teacher, who traveled from New Zealand to reunite with him and other students.

The teacher, Chris Williams, along with his wife, Christine, traveled via airplane, bus and car to be with Matangira and his wife, Nicole, and their daughter, Mailee Grace. The Matangiras hosted a welcome holiday dinner at their Salisbury home accompanied by over two dozen friends and family.

Williams taught Matangira his junior year in high school and through the teen church. In 2004, the Williamses moved from Zimbabwe to New Zealand where they have remained. Christine, an author and teacher, is a native of Zambia, who moved to New Zealand when she was 20.

Chris, who was born in Zimbabwe taught high school in Gweru, Zimbabwe, for 13 years.

The trip is three years in the making. Matangira reached out to Williams via Facebook and the two reconnected. In fact, Williams said he has been able to reconnect with more former students.

“Facebook has made me friends with about 50 students,” Williams said.

His former student reached out to him at a low point in his life, but when he learned of the impact he made it was life-changing.

Williams said he received a message from Daniel telling him how much of an impact he’d made as a teacher.

The men came up with the idea for reunion in 2014 and in 2016 began writing other former students including Mercy Karidza and Alfred Nyoni, both of whom live in the region. After leaving Salisbury bound for a bus to Atlanta, the couple will head to Texas to stay with other former students for about two weeks.

“The most significant thing happened was not only the miracle of uniting with my former teacher after 28 years, but also the love and support I got from friends and family here in Salisbury,” Matangira said.

During the Christmas dinner, Matangira and Williams sang songs that they once sang in teen church. Williams said he wanted to know from those gathered how Matangira had impacted their lives or how they met him.

Some of his friends shared how they’d met Matangira at the gym or through church. Others said he always was able to bring a smile to their faces with his own and impart some kind sentiment.

“I am eternally blessed to live in a community here in Salisbury that came to meet Mr. Williams and celebrate the occasion in song, fellowship and prayer,” Matangira said.

He said he’d given up hope that he’d ever being reunited with his teacher.

“This is the greatest Christmas gift ever,” Matangira said.

Williams shared some words about what it meant to him to reconnect with his students.

“This unlikely reunion is the stuff dreams are made of. Some spend a lifetime and may never see their childhood heroes again, today I am overwhelmed beyond measure,” Matangira said.

Once their trip is complete, the Williamses will have traveled from New Zealand to Washington, D.C. to Atlanta then Charlotte and then to Texas to see Chris’ former students and afterward will visit family in the United Kingdom including England, France and later Switzerland and make their return home in February.