Snowglobe love: A sister steps in to write Santa 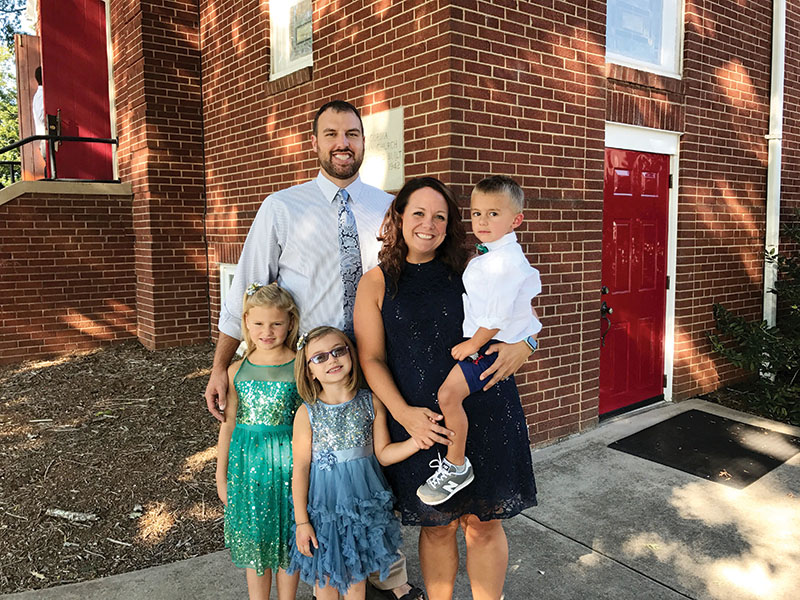 The Faggart family at a wedding this fall, Audrey, 7, Abby, 5, Jonathan, Amanda, and Hoke, 3. Submitted photo.

CHINA GROVE — This is a Christmas story about a shattered snow globe, a little girl’s tears, and a big sister with an even bigger heart.

Sometime this morning in China Grove — probably around daybreak — Abby Faggart will discover that Santa brought her a new snow globe after all.

Over the weekend, Abby, 5, her sister Audrey, 7, and their little brother, Hoke, 3, were all playing in the girls’ room. Hoke accidently ran into the wall, and the collision caused one of Abby’s 15 or so snow globes to fall off the shelf and break.

Abby, who has autism, went into immediate meltdown — like a temper tantrum, mom Amanda explains, but worse. Sometimes, she just can’t get herself calmed down, and this was one of those times.

But this particular incident had Amanda puzzled.

“I couldn’t figure out why she couldn’t get it back together,” Amanda says. “I have to figure a lot out because she doesn’t say everything.”

“I already saw Santa, and told him I wanted a stupid toy cat,” Abby said. “But now I need a ballerina snow globe!”

“I was panicking,” Amanda admits, “because I knew we weren’t gonna see Santa again.”

Visiting Santa is challenging for Abby under the best of circumstances, her mom explains. “This year, she got close enough to actually yell to Santa what she wanted.”

A stupid toy cat. Not a snow globe.

That’s when Audrey jumped into the conversation.

“She tends to calm Abby down,” Amanda explains. “She’s so good with her.”

Finally, Abby did get calmed down, and the next day, when Amanda was in the girls’ room, cleaning up, she found a note Audrey had written.

My sister wants a ballerina snow globe. She gets scarde when she sees you without me. I dont want ABBY to cry. love, Audrey

It was Amanda’s turn to cry.

“God really knew what He was doing when He had her be first,” Amanda says. “Audrey is so sure of herself and confident. She takes such good care of the other two children.”

Amanda and her husband, Jonathan, have never made a secret of Abby’s autism. She was diagnosed at age 2.

“We have talked to both of the girls about it,” Amanda says. “Audrey knows she has a special responsibility, and sometimes it stinks for her. But Abby is really neat and really quirky. We have been really blessed with Audrey, because she knows what Abby needs. Abby would be lost without Audrey. Audrey takes a lot in stride and does a lot of helping.”

Early in the week, Amanda knew she needed to help Santa find a ballerina snow globe. She took it upon herself to scout out some stores while Abby was at occupational therapy.

“Mind you, I have a hip problem,” says Amanda, who recently underwent corrective surgery. “I just got off crutches last week. So I was hobbling around.”

Finally, at Home Goods, she found just what Abby wanted — and let Santa know right away.

Not only does Abby has the support of her big sister, the Faggarts have support from the children’s grandparents, their church family, and a host of friends.

Audrey is a first-grader at Bostian Elementary, while Hoke and Abby are in preschool at Thyatira Presbyterian Church. Abby’s teacher is Leslie Reed, whose youngest son, Jack, also has autism.

“Leslie is all about rules and structure, so there’s no deviation, which is wonderful for Abby,” Amanda says. “Abby is not very flexible — she just can’t be. So this has been a really good school year for us.”

Jonathan is a physician assistant at Ortho Carolina, while Amanda works part-time as counselor for Nazareth Child and Family Connections.

“My background helped me know something was up with her early,” Amanda says, but it did not prepare her and Jonathan for the actual diagnosis.

“Our support system is so amazing,” Amanda says. “The children’s grandparents are amazing, and we have the best friends anybody could ask for. They jump in when I need a break. They are comfortable with Abby and she is comfortable with them. We’re very lucky.”

Amanda and Jonathan have been married for 10 years, and celebrated this summer with a trip to Jamaica. He’s also amazing, she says.

“He’s very involved with Abby, and with Audrey and Hoke,” Amanda says. “Every IEP meeting and every developmental pediatric appointment, he’s there with no questions asked. I never have to go to any of those by myself.”

After her hip heals, Amanda plans to start running again. She’s done a marathon, three half marathons and a relay race with friends.

“She does really well,” Amanda says. “The staff at Piedmont School of Music & Dance have been wonderful with her. Her teacher came in on her own time to help Abby and make her feel less nervous. She’s had an excellent support system, that’s for sure.”

But she has no bigger advocate than Audrey. That’s why, this morning, Audrey is getting a special shout out from the Big Man himself.

I know it’s hard to talk to Santa, but I appreciate your sister writing me a letter about your snow globe…

“Santa will give some credit to Audrey, because, bless her heart, she deserves it,” Amanda says. “She has a good heart, and as she grows up, I hope she’ll understand that people are different and I hope this will teach her to be very tolerant.”

With her good, big heart, Audrey already seems to have learned that lesson just fine.