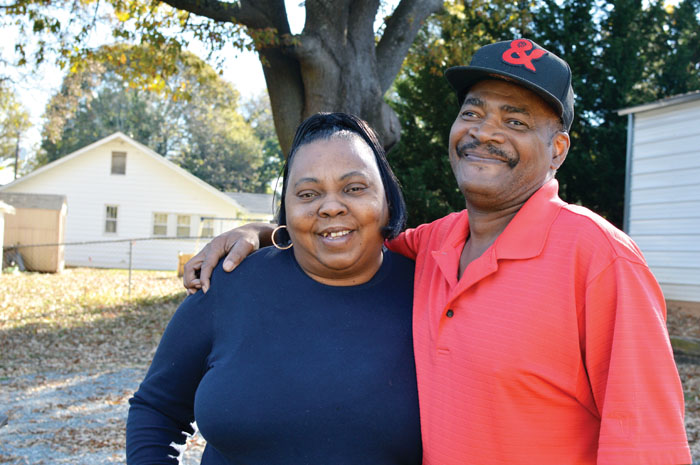 “You’re going to be my wife,” Joseph said to Nellie in August 2001 while they chatted in a New York City park.

Nellie wasn’t so sure.

“I told him he was crazy,” she said, as the couple reminisced in their Kannapolis home. “But after that, we became inseparable.”

The New York natives moved to Kannapolis in 2002 and were married at the Cabarrus County Courthouse. Fifteen years later, they remain nearly inseparable and share a common goal: They hope to improve the health of future generations by joining the MURDOCK COPD Study.

The study is managed by the Duke Clinical and Translational Science Institute in Kannapolis at the North Carolina Research Campus.

Nellie recently became the 299th participant in the study, and Joseph enrolled the next day as No. 300.

Institute researchers aim to enroll 850 people in the study and follow their health for up to five years. To qualify, participants do not need to have COPD, which stands for chronic obstructive pulmonary disease, but they must have smoked.

Researchers are studying the severity of smoking-related symptoms and following the progression of participants’ lung function to better understand the disease. According to Scott Palmer, M.D., director of respiratory research for the Duke Clinical Research Institute and principal investigator for the study, this could help doctors provide better care for their patients and more effective treatments in the community setting.

“I think it’s wonderful,” Joseph said. “It will help people later on if researchers can understand COPD. I want them to know more about what’s going on, because I have it. If we can help them by joining the study, then we feel like we’ve done our part.”

Chronic lower respiratory diseases, which include COPD, are the third-leading cause of death in the United States.

People like Nellie and Joseph, who started smoking as teenagers, provide a way for researchers to compare the current system for classifying the stages of COPD to disease development and progression in a real-world setting.

“Much of what we have learned about COPD to date has been gathered from research done in large academic medical centers,” said Jamie Todd, M.D., assistant professor of medicine at the Duke institute and co-principal investigator of the study. “But for this study, we have the unique opportunity to work with the MURDOCK Study to better understand the progression and management of COPD in a community setting.”

Joseph, 57, coughs and tires easily now. but growing up in Brooklyn, he played baseball and football, drove a truck, and worked as a mechanic. A former boxer and chef, Joseph had to quit sports and his job when he suffered a stroke in 2010.

Nellie, 51, grew up in the Bronx with 10 siblings and worked for the City of New York in a variety of jobs, including helping people who received public assistance find work. She suffered kidney failure last year and receives dialysis three days a week while awaiting a kidney transplant.

Nellie and Joseph moved back to New York a few years ago to care for their ailing mothers. They returned to Kannapolis in 2016, drawn by the mild winters and lower cost of living. Without a car, they call a cab or have friends shuttle them to health care appointments. For errands, Nellie walks and Joseph uses a motorized scooter.

Sixteen years after Joseph asked Nellie if he could buy her a Pepsi on a hot summer day, the couple count their blessings daily, despite their many health problems. They are intrigued by the transformation of Kannapolis into a research hub, and proud that they have contributed by joining the MURDOCK COPD Study.

“I like the idea of Kannapolis being about research,” Joseph said. “Helping sick people, that’s what we need to do.”

“We feel good about being in the study,” Nellie added. “We are blessed.”

Current or former smokers who are at least 40 years old could qualify to join the MURDOCK COPD Study. No geographic restrictions apply. During study follow-up, the institute in Kannapolis will contact participants every six months to measure changes to their health.

To learn more, call 704-250-5861, send an email to murdock-study@duke.edu or visit www.murdock-study.org/COPD. Participants will be offered compensation for each in-person visit.

Tax cuts for Christmas? What you’re getting and when…