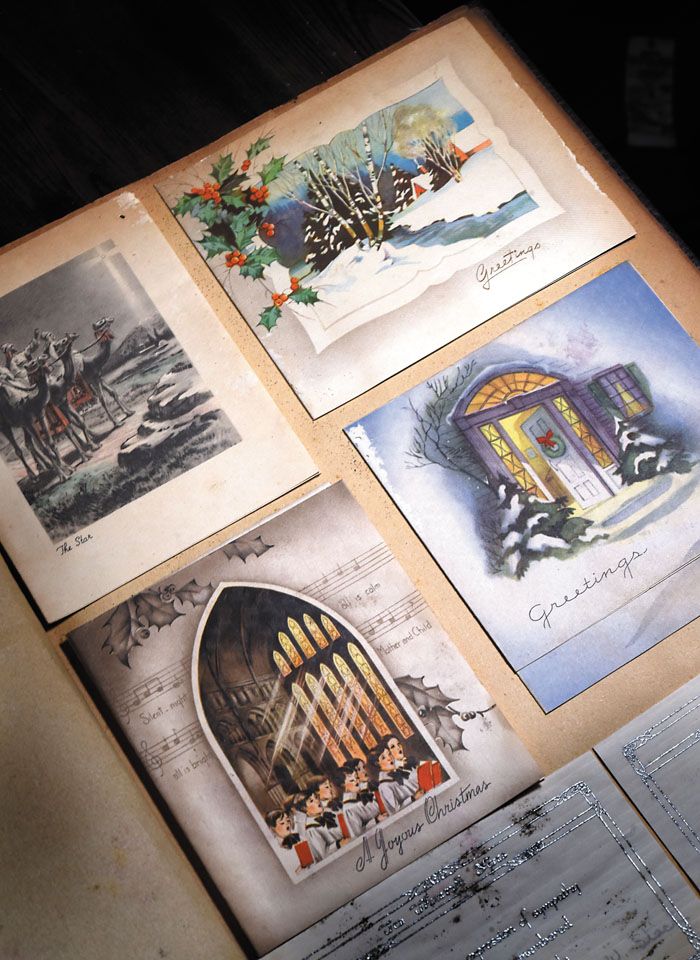 Christmas cards collected in this Scrapbook by my grandmother in the late 1930s until 1942. photo by Wayne Hinshaw, for the Salisbury Post

My mother passed away about 4 years ago leaving a house packed full of too much of everything. She was a pack rat in the biggest way. She had collected items from my grandmothers, my aunts, and a friend that lived a mile or so away from her in Randleman. But, this will be a story for another day, I’m sure.

Sending Christmas greeting cards is believed to have started in the Victorian era. The first commercial cards were printed in London, England in 1843 by artist John Callcott Horsley. Horsley was requested by Sir Henry Cole to design a card for him to send to his friends at Christmas. Horsley printed a thousand and placed them on sale.

The commercial venture was not a big success with the public. The members of the temperance league felt that the cards might encourage drunkenness. This is 1939 Christmas card. photo by Wayne Hinshaw, for the Salisbury Post

Eventually, cards pictured Nativity scenes, snow scenes and red robin birds on the front. The postal carriers wore red uniforms so the robins were associated with the postal workers.

Christmas cards came to America in 1840s, but they were so expensive they were not popular.

In 1875, Louis Prang, a German printer who had worked on the early English cards began mass producing cards at his Boston shop. These cards pictured flowers, plants, and children. The mass production made the cards more affordable to the common man. By the 1880s, Prang had a successful greeting card business treating the cards as a work of art.

The famed Annie Oakley and sharpshooter in Buffalo Bill’s Wild West Show, was in Scotland and sent Christmas cards to her family in the US, showing a photo of her. She designed her own card and had them printed in 1891. This customized card became popular.

From 1910s to the 1920s people started making “home made cards” made of delicate materials using foil and ribbons on them. Most were hand delivered. This is a late 1930s Christmas card. photo by Wayne Hinshaw, for the Salisbury Post

To set the stage for my grandmother’s cards, I picked the year 1939 to give a feeling of life at that time and it was the date about the center of of her collection dates.

Baseball player Lou Gehrig retired from major league baseball in 1939. The movies “Gone with the Wind” and “The Wizard of Oz” premiered that year. You could order a home from a Sears Catalog. The average wage was $1,730 per year with gasoline costing 10 cents per gallon. New cars costs around $700. The standard school bus color of yellow was adopted in the US.

On the world scene, Germany was dropping leaflets on Poland asking them to surrender, then attacking Poland. Britain, France, India and Australia were ready to declare war with Germany while the US was trying to be neutral, but preparing for war.

Grandmother’s Christmas cards pictured art work of Joseph, Mary and baby Jesus, snow scenes, church windows and choir boys, wise men on camels, and stagecoaches being pulled by horses. One of her cards featured three poodles eating around a bowl. I’m not sure about the Christmas connection on that one. This is a late 1936 Christmas card. photo by Wayne Hinshaw, for the Salisbury Post

Why would my grandmother keep these cards in a scrapbook? The cards were from close friends whose friendships were important to her. I believe that she just thought that the cards were to pretty to toss away. Maybe she had never received Christmas cards before, or at least not very many, so they were special to her. It was my mother who recorded the year dates on each card. Mother dated and made records of many family processions so that my brother and I would know why she felt the items were important to keep.

The poem on one 1940 card reads, “How sweet the lingering music dwells — The music of the Christmas Bells.” This is a 1937 Christmas card. photo by Wayne Hinshaw, for the Salisbury Post

A practical saying reads,” From our home to your home — Everybody in our home wishes everybody in your home, A very Merry Christmas and A Happy New Year.”

A very clever card showing art work of stores reads, “Greetings In and Out and Round About. Through every shop I go — But I can’t find a better Wish than This, and Here it is below, Merry Christmas,” from a 1939 card.

No better way to end this column than to quote one last 1940s card,” Christmas would not be complete without wishing you the Peace and Love that came with the birth of the Christmas Spirt.”