Tar Heels bounce back against OSU 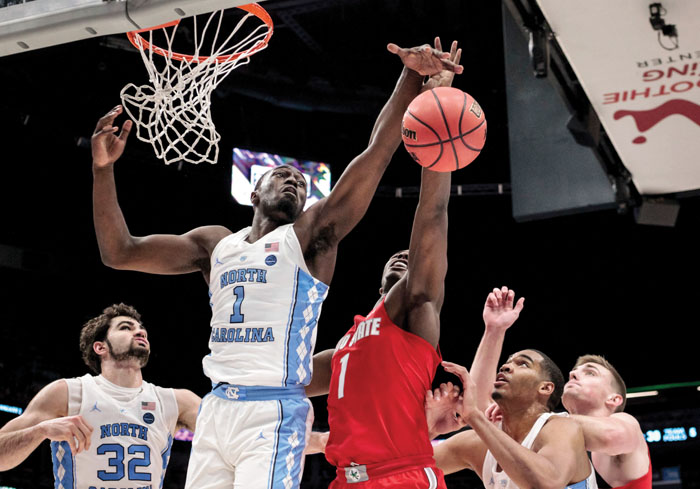 The seniors provided a convincing response in a neutral-site, made-for-TV matchup against Ohio State.

Berry and Pinson each scored 19 points, and No. 5 North Carolina bounced back with an 86-72 victory over the Buckeyes on Saturday in the CBS Sports Classic.

“Any team should have a great amount of focus after a loss,” Pinson said. “I was just ready to come out and step up for my teammates.”

Pinson scored six points on flawless free throw shooting inside the final 1:06 of the game as the Tar Heels (11-2) kept the Buckeyes (10-4) at bay.

“We’ve got veteran guys who know we can’t sulk,” Pinson said. “We need to move on to the next game, but at the same time, keep that loss in our minds.”

Cameron Johnson — a graduate transfer from Pittsburgh whose recent debut was delayed by injuries — scored 13 points in just his second game for North Carolina, which had 13 3-pointers.

Keita Bates-Diop had 26 points — one point shy of his career high — for Ohio State. He shot 10 of 17 for the game and scored 19 points in the second half, including eight straight for Ohio State during a late 13-4 run that briefly pulled the Buckeyes within 78-69 with 1:10 to play.

In the first half, Bates-Diop played just 8 minutes because of a couple of quick fouls, and that helped Carolina take its first double-digit lead before halftime.

“When you’re losing a guy as important to us as Keita is, you’re going to feel it, and we felt it,” said Ohio State coach Chris Holtmann, who was called for a technical foul during the first half. “I’m sure that was a factor in them stretching the lead.”

C.J. Jackson scored the first 11 points for Ohio State before finishing with 19 for the game, while Kaleb Wesson added 12 points.

“My teammates found in the right spots, pretty much,” Jackson said, adding he was “just kind of taking what the defense gave me at the beginning.”

Felton “came in and gave them a big lift,” Holtmann said.

Ohio State: The Buckeyes looked competitive in stints, but never led and had trouble keeping their deficit under double digits against a UNC squad that had more balanced scoring. Ohio State also struggled with UNC’s physicality and size under the basket. The Tar Heels outrebounded Ohio State 39-25.

North Carolina: A game against Ohio State might have been just what the Tar Heels needed to bounce back from a surprising loss at home to Wofford earlier this week. UNC is 12-2 all-time against the Buckeyes, including a 5-0 mark under coach Roy Williams.

While Williams praised his team’s response, he did so with a cautious tone, noting that, “perhaps the ball going in the basket makes everything look better.”

Indeed, UNC hit 13 of 25 shot from 3-point range with Felton scoring all of his points from deep, where he went 4 of 5.

“We did a better job of driving the ball, and I think it was because we were knocking down shots from outside,” Berry said.

Ohio State has a week off before hosting in-state non-conference foe Miami of Ohio on Dec. 30.

North Carolina also is off until Dec. 30, when the Tar Heels open ACC play at home against Wake Forest.

And he did it in the same arena where his brother, Jrue Holiday, plays home games in the NBA — albeit to the disappointment of a decidedly pro-Kentucky crowd.

Holiday capped a 20-point performance with a pivotal driving scoop and two free throws in the final 33 seconds, and UCLA upset No. 7 Kentucky 83-75 on Saturday.

“It’s always special when you can play where your brother’s played,” Holiday said. “Obviously, he’s doing really well right now (with the New Orleans Pelicans), so that’s good. But just to get the win out here, it’s just awesome.”

Kris Wilkes also scored 20 points, and Thomas Welsh added 13 points and 11 rebounds for UCLA (9-3), which won for the seventh time in 15 meetings between these historical college basketball powerhouses.

Hamidou Diallo scored 18 points and Wenyen Gabriel added a season-high 16 points for Kentucky (9-2), which lost for the first time in eight games.

“We’re better than this,” said Kentucky coach John Calipari, who harped on his players’ poor decision-making and inconsistent effort.

Kentucky hit only two of 10 3-point shots in the first half.

Yet when Gabriel made the Wildcats’ second 3 17 minutes into the game, Kentucky led 37-29.

But Jaylen Hands’ layup and Welsh’s 3 ignited what grew into a 21-2 Bruins run, putting UCLA ahead 50-39 early in the second half. Welsh and Ali each hit two 3s during the pivotal surge.

Kentucky didn’t go down easily, though. Knox hit two 3-pointers and a soaring baseline dunk during a 13-2 Kentucky spurt that tied it at 52 and spiked the volume of the crowd at the CBS Sports Classic.

But a poised Welsh again helped spark a UCLA spurt with a steady jump shot as the crowd urged on Kentucky’s defense, and the Bruins built their lead back to 12 on Holiday’s free throws before Kentucky made one last charge that came up short.

UCLA:  Hands, who scored 14 points on 5-of-10 shooting, and Prince Ali, who had 12 points on 4-of-7 from the field, gave the Bruins the balanced, efficient scoring they needed to hold off an explosive but inconsistent Kentucky squad.

Kentucky: The Wildcats demonstrated the requisite athleticism and talent to win the game with spectacular highlights on both ends of the court. Ultimately, they were done in by careless passing and a propensity to settle for deep or difficult shots against a team playing well enough to make them pay for their mistakes. Some of their 14 turnovers — including nine in the second half — were caused by UCLA’s sound positioning and active hands. But others were passes to spots vacated by teammates who apparently were not on the same page.

“We tried to make the hardest plays when we were in the guts of the game,” Calipari said as he began to mock his players’ thought processes. “I have a chance for a layup? I’m going to pull up and shoot this. … I don’t get an ‘ooh’ and an ‘ah’ when I make an easy play. I like to make this look-away, throw-over-my-shoulder pass.”

While Calipari expressed disappointment his team couldn’t sustain second-half surges long enough to take the lead, he expressed hope the loss would provide lasting lessons for his latest freshman-filled squad.

“As much as you hate to say it, you got to get knocked in the mouth and lose and it’s got to hurt every player,” Calipari said. “Today we played a team that wanted the game worse than we wanted it. This is usually what happens. … They’re bouncier. They’re diving for balls. They’re playing with more emotion. You are losing that game. So we deserved to lose.”

Kentucky is back home on Friday to host in-state rival Louisville.