Salisbury’s Brian Hinson is county Coach of the Year 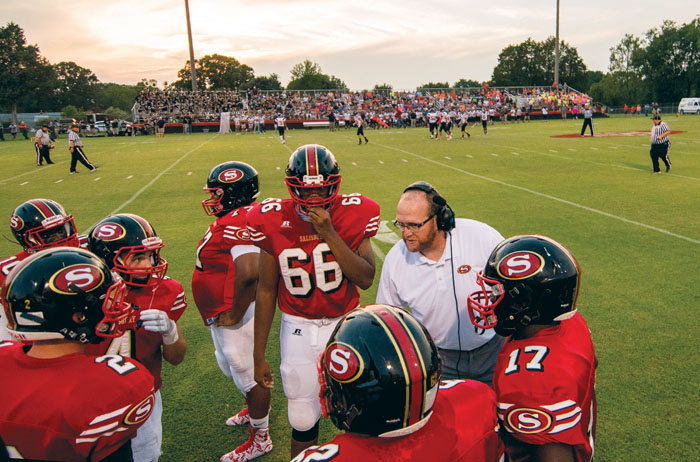 JON C. LAKEY / SALISBURY POST ... Rowan County football Coach of the Year Brian Hinson talks to his Salisbury offense during a game with Carson on Aug. 26. Hinson, in his first season at Salisbury, led the Hornets to a 7-4 season and a state 2A playoff berth.

The Rowan County Coach of the Year instead deflects credit to his assistants and players for righting a rudderless ship and steering the Hornets into the 2A state playoffs.

“It’s a nice honor — and a big deal because we had such a great season,” said Hinson, the former Catawba all-American who led SHS to an out-of-nowhere turnaround and a 7-4 overall record. “But even more important was watching those kids become successful. We took kids who struggled the last few years and watched them grow, saw them develop and learn how to win.”

Not an easy task, especially considering the Hornets officially won only three of 22 games the last two seasons. Hinson, also a Coach of the Year winner with East Rowan in 2009, gave Salisbury’s program its voice back along with newfound credibility.

“Basically, he turned it all around,” said Nick Austin, the senior linebacker headed to North Carolina A & T. “He was all we needed. He realized we had some athletes and put us in the right spots to win.”

Back in early-August, weeks before the first kickoff, Hinson offered an intuitive thought that bears repeating. “Everyone likes to throw around the word ‘potential,’ but that doesn’t mean we’re good,” he had said. “It means we can be.”

And so they were. Salisbury enjoyed a five-game winning streak, went 6-2 in the Central Carolina Conference and was favored in its season-ending playoff loss to Red  Springs.

“Everything fell into place, starting with the coaching staff,” Hinson said. “Coach (Mike) Herndon had been there a while and he did a tremendous job as our defensive coordinator. I thought our defense was lights-out this year.”

“Right from the first game — when we lost to North Rowan — I think these kids saw they were better than what people were giving them credit for,” Hinson said. “By the fourth week we were able to start two-platooning kids, getting everybody where they needed to be. That helped us keep fresh legs on the field and was good for the longevity of the program. You get more kids playing and more kids buying into the program. Hopefully, even more kids will come out next year.”

Left tackle Brandon Lingard welcomed Hinson’s input. “As players, he made everything harder for us,” said Lingard, a 6-foot-5, 235-pound senior who hopes to land a tryout with Wingate next summer. “We had to have determination to play. If we didn’t, we weren’t playing. But we all realized teams that work harder are better teams.”

This one was better because of Hinson, who adapted his coaching style to modern-day student-athletes.

“A lot has changed over the last 15 years, but they’re still kids,” he said. “Kids today have social media and they put everything out there. They’re tech savvy. As a coach you still have to have high expectations, but you’ve got to understand how to motivate your kids. It’s different today than it used to be.”

As Coach of the Year, there’s no rest for the ambitious. Hinson says he and his staff are already planning for next season.

“Of course you’re personnel changes every year, but we’re already recruiting the hallways and trying to get kids in the weight room,” he said. “The biggest change I want to make is getting our kids physically stronger. That’s something that’s missing in our school right now.”

Always on the job. That’s where you’ll find the Coach of the Year.

“Hey, I’ll take every reward I can get,” Hinson said. “But to me, seeing these kids take pride in something they’ve accomplished, that’s the real reward.”