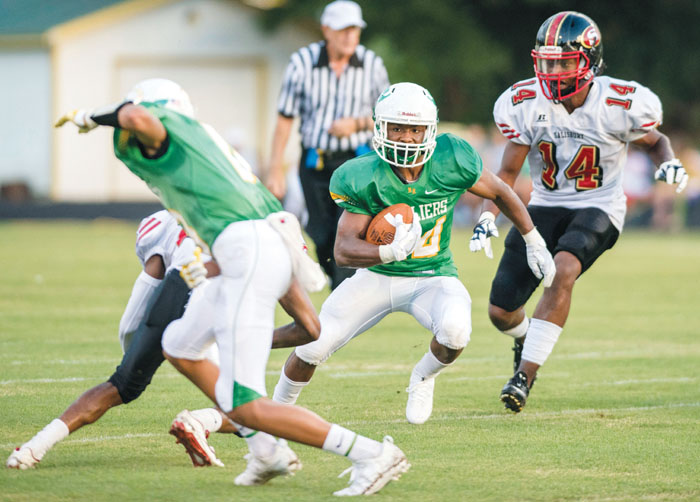 SALISBURY — North Rowan running back Jaleel Webster ended any doubt about Rowan County Offensive Player of the Year in the first round of the 1AA state playoffs.

“The last game of his high school career, and what a way to go out,” North coach Ben Hampton said. “Jaleel wanted the ball and we wanted to give it to him.”

Webster is short, but he’s not small. He packs a punch. He probably made more yards blasting through would-be tacklers than sprinting by them.

He finished his senior season with 1,597 rushing yards and 501 receiving yards and he also was a factor as a kickoff returner. He led the county with 19 touchdowns.

Webster’s career total of 3,411 rushing yards ranks second in North Rowan history behind JaReke Chambers. He surged past such legendary ballcarriers as Jimmy Heggins, Darryl Jackson and Mark Sturgis, who held the school and county marks for decades.

“I just did my best to make things happen for my team,” Webster said. “I guess it was good enough.”

It was good enough to make him Player of the Year. His most serious competition came from the West Rowan pass-catch combination of junior quarterback Payne Stolsworth (2,101 passing yards, 23 TDs) and sophomore  Jalen Houston (53 catches, 1,144 yards, 14 TDs).

But Webster was hard to overlook. He was the offensive catalyst for a team that led the county with eight victories.

“He put us on his back so many times, just carried the load,” Hampton said. “You look at his stature and you understandably have some doubts about him, but there’s no doubt he’s a game-changer. He has a very tough, run-through-walls mindset, and he’s an all-purpose guy who hurt teams catching the football as well as running it.”

Webster set the school single-game rushing record with 302 yards against Lexington as a junior.

Lexington always brought out the best — and the beast — in Webster, who spearheaded an unbelievable North comeback to beat Lexington, 44-37, this year. Webster had 180 rushing yards, plus 80 receiving.

“We scored 31 unanswered points in about eight minutes against Lexington, and what was really remarkable about it, is we did it on the ground,” Hampton said.

Webster had two opportunities to surpass his own single-game mark this season, but Hampton showed mercy to overmatched Yadkin Valley Conference opponents. Webster sat down with 252 rushing yards on 16 carries against Chatham Central and with 258 on 17 against South Davidson.

He had 226 touches as a rusher or receiver this season and averaged 9.3 yards per play. He was a first down waiting to happen.

Hampton said where Webster separates himself from his competition is in the off-season. That’s when he does some of his best work. He’s talented, but his year-round work ethic has made the difference between good and great.

“Opponents always looked at me in warmups and figured I’d be easy to take down,” Webster said. “I always used that as motivation to keep working harder and to do better.”

Webster will be a next-level player, although his destination is still undecided.

“He’s put in the work in the classroom and he’s put himself in position to play college football,” Hampton said. “We’ll find him a place.”