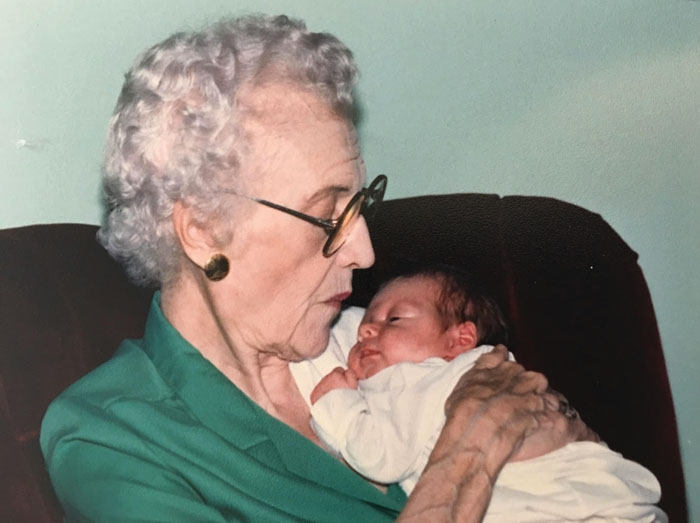 Around here, people say that pearls take on the energy of the person who wears them. As a 10-year-old girl, I’d never heard that. But I knew it, felt it in the way you do as a child with things you can’t really explain but you understand anyway. Like God. Or flowers blooming. Or the way I knew my grandparents in heaven could see me even though I couldn’t see them.

Even still, knowing they can see you is different from sitting around the tree on Christmas Eve like you always do, with your parents and your uncle, and finding a gift with a tag in your grandmother’s handwriting, one that says, “For Kristy, Love, Grandmother.”

Grandmother. Always Grandmother. Not GG or Grammy, Grandmommy or Meme. Grandmother. That was how she was, my grandmother. Serious. Resolute. Smart. Feisty, but not in that silly way you see in movies about Southern women. Feisty in the way that she was always raising money or a sign or a rallying cry.

Grandmother died when I was 3 years old, despite her best efforts to quit smoking, start eating healthy and the hour-a-day aerobics habit she began after her diagnosis at age 74. I was too young to really know her, to have had deep conversations with her, to understand her longing for a different life, a life where she had a career and a purpose outside of her home and her family, a life where it was proper for her to chase her dreams and change the world.

But I know all of that. I’ve always known all of that, from the moment I opened that package underneath the Christmas tree. I peeled back the red and green wrapping to reveal a blue, velvet box, worn in places from fingers opening and closing it day after day. Lying inside, perched just so on the satin lining, were my grandmother’s pearls. They are elegant, graduated pearls, that hit me in the middle of my chest, right above my mole, the same mole that I would find out via photographs years later my grandmother also had.

My memories of my grandmother are like those photographs, or, rather, one of those Viewfinders I had as a child, the ones with the snapshots of the Grand Canyon and the Eiffel Tower. I can flip through the intonation of her voice. The way she smiled at me. The tick tock of the cuckoo clock in her TV room. The way she loved English Corgis. The pink bathrobe she sewed for me that I wouldn’t take off. The tiny pink sweaters I found in her drawers, the ones she knit for all those babies she lost, for the daughters she prayed would leave a legacy she didn’t get to.

None of that adds up to all that much, when you really think about it. Even still, rooted deeply in my heart, implanted into my consciousness, is this idea about who she was, this idea that we’re a little bit the same.

Because I have never chosen an easy path. I always want to do better, be better, change that thing I don’t agree with, make that wrong thing right again. I sought out the professors who gave only one A so I would know I had truly earned it, only wanted to write books if I could write them for a big New York publishing house.

Just three years ago, that seemed unimaginable, a far-off, unattainable dream. Sometimes, now, when I’m speaking at a venue or to a crowd I used to picture myself in front of, I still can’t believe it’s happening. Sometimes, in those moments, I put my fingers up to my neck. I touch those pearls, and I wonder if my grandmother is proud of me, if she sees how hard I’ve worked, if she has been helping me along this journey to a destination that, to be honest, I’m not quite sure of yet.

A few months ago, maybe I got my answer. I was sitting on an airplane beside a psychic medium—with a message. I was skeptical at best, but when you’re stuck in coach with four hours to kill, you take whatever entertainment you can get.

“You have a lot of people up there rooting for you,” she said, smiling at me.

I smiled back because I know.

“Your grandmother,” she said, “she wants me to tell you to keep fighting for her.”

People always have this vision of Southern women as these steel magnolias who put on their lipstick and pull themselves up by their bootstraps. I buy into that. I really do.

Sometimes I think that the reason I can’t just relax and leave well enough alone is because I was raised by so many strong Southern women—and men who helped them be that way. So maybe it’s genetic. Maybe it’s just a coincidence.

But, then again, maybe it’s the pearls.