Local children Shop with a Cop for the holidays 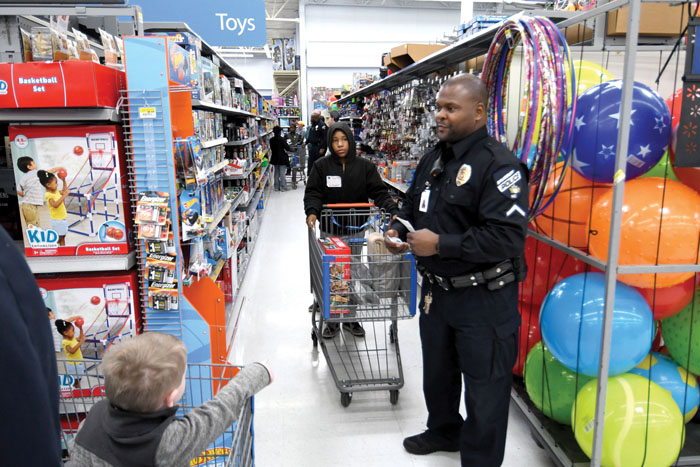 JON C. LAKEY / SALISBURY POST Salisbury Police SRO Greg Summers shops in the toy department with Trayvion Pinkett. Law enforcement personnel took time out of their Friday before Christmas to help children pick out Christmas presents for their family. The annual Shop-with-a-Cop offered 21 kids the opportunity to spend money at Walmart and then take the gifts back and wrap them up for Christmas. Friday, December 22, 2017, in Salisbury, N.C.

SALISBURY — Jakaden McClung zipped and zagged from the electronics section of Walmart to go on a hunt for slime for his sister. The 11-year-old left his law enforcement shopping buddy trailing behind him, but he was a child on a mission.

Jakaden was one of 21 local children who had the opportunity to “Shop with a Cop” at the Salisbury store. Each child received a $200 gift card to make purchases for themselves and family.

Rowan County Sheriff’s Deputy Kim Barringer said Jakaden nearly spent most of his money on everyone else in his family including the family’s dogs Shadow and Daddyio. He spent less than $25 on himself.

Jakaden went through his Christmas list and recounted the items he bought his mother, father and his siblings.

“Walmart is very kind to us. We were able to do two more children,” the officer said of adding more names.

He said many of the families are underprivileged and this program is also an “excellent way to introduce them to the sheriff’s department. It does our heart good,” he said.

Barringer said he was touched by the fact that Jakaden thought of his family first and made himself last. In the end, Jakaden barely had enough for the one thing he bought himself — a remote-controlled car.

Barringer just shrugged and said it would be taken care of.

The 15-year veteran law enforcement officer said a lot of children grow up to fear police and this lets them see another side.

The Rowan County Sheriff’s Office has sponsored the program for a number of years and held various fundraisers throughout the year to be able to have each child spend $200 this year. This year they had participation from not only Rowan Sheriff’s deputies, but Salisbury Police, Landis Police and China Grove Police.

ZaNeetra Teeter, 13, had already scouted the store prior to shopping with School Resource Officer Tommie Cato. She knew what she wanted to buy for her mother and sister and knew just where to get it. Unfortunately, she was met with a change in location for one of the items.

“I will get the other one,” she said of a Beyonce perfume set.

She also bought herself some undergarments, a phone case and makeup.

This is the second year Tyler has volunteered and the first for his brother, who’s been part of the Explorers program for a few months.

“I like to give back to the community,” Tyler said.

Walmart Manager Shane Owens said the Shop with a Cop program is a great one. He’s been the manager at the Salisbury store for a few months, but worked at the Pembroke store where officers there participated in a similar program.

Community is a big part of Walmart and what the company stands for, Owens said.

He said this program is something they want to continue in partnership with the Rowan County Sheriff’s Office.

“It’s very important to have that community relationship,” Owens said.

There were a number of supervisors and more store personnel in the aisles as the children decided what gifts to purchase.

He said it gives the children an opportunity to get gifts they may not otherwise receive.

“I’ve enjoyed it. It’s really needed and the kids enjoy it,” he said.

Summers said the most important part of the experience is that the children enjoy it.

Prisilla Ramirez said she had fun shopping for her sisters and brothers as well as herself. She bought herself rechargeable headphones.

The 13-year-old said he had his mother, dad, friend and himself on the list, which included a Nerf gun and an Xbox game.