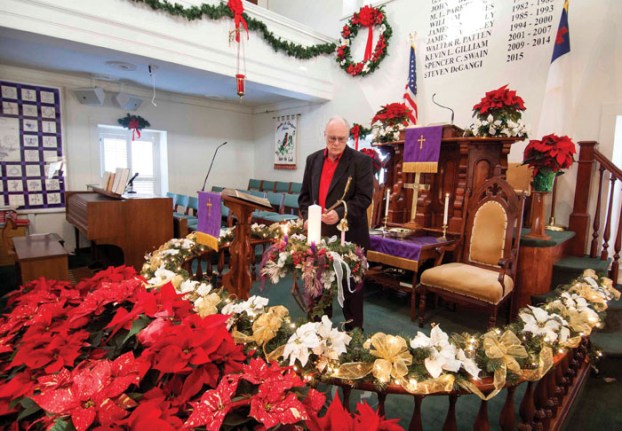 JON C. LAKEY / SALISBURY POST Rev. Jay Whitley extinguishes the candles burning in the Advent wreath. Longtime member Etta Mae Rinehart Poole, who died on Nov. 22, was the driving force behind the Christmas decorations. Members of her church, Grace Lower Stone Church near Rockwell, carried on the tradition of fully decorating the inside of the sanctuary of the historic church. Monday, December 18, 2017, in Rockwell, N.C.

ROCKWELL — At seminary school, the Rev. Jay Whitley says, a piece of time-worn advice given to future pastors is to watch out for the first person from the congregation who pays you a visit.

At 8:15 a.m. on his first Monday on the job at Grace Lower Stone Reformed Church, Whitley welcomed Etta Mae Poole into his office.

“She told me how things were,” the retired Whitley says, laughing.

In the years to come, Whitley and Poole — most people called her “Mae” — would butt heads at times. She had a lot of the common German traits, Whitley says.

She was hard-headed, hard-loving and hard-working.

“But most of the times, we had a real loving relationship,” Whitley says. “She was a sweetheart. I know if you wanted it done, you told Mae Poole.”

Mae died Nov. 22, the day before Thanksgiving, and her funeral was scheduled for the following Monday at the church she attended her whole life.

During the Sunday morning service Nov. 26, Rhonda Rummage, president of the consistory, walked up to the altar and made a rallying call for the congregation to gather again that afternoon to decorate the sanctuary for Etta Mae Poole.

“We’ve never had as many people out there as we did that Sunday afternoon,” Whitley says.

In front of the poinsettias, they positioned molded and painted figures of Joseph, Mary, the heralding angel and baby Jesus.

Outside, luminaries lined the long walkways of the church, and leading into Christmas, they have come on at dusk every evening.

The church was in its full Christmas splendor for Mae’s late November funeral.

“They’re amazing,” Whitley says of the decorations. “We’ve had some pretty talented people over the years.”

All will be on full display today for Grace Lower Stone’s regular morning service and tonight’s Christmas Eve candlelight service. It definitely will seem as though Etta Mae Poole is there.

What the congregation did for Mae still makes daughter Candy Broadway emotional. Broadway says it was a perfect way to honor her mother, and it meant a lot to the family during the funeral.

“She had the greatest respect for the church,” Broadway says.

Broadway smiles, remembering how Poole earned the nickname of “Mean Mae,” because she would never tolerate children running or misbehaving in and around the church.

Mae Poole was 90 when she died.

At Grace Lower Stone, Mae co-founded the Timeless Treasures seniors group with Broadway. She also belonged to the Women’s Guild and the Willing Workers Circle. Mae especially cherished her position on the grounds committee for church beautification — and took it seriously.

“She could outwork any man as far as trimming the shrubbery (and rose bushes),” Broadway says.

In the sanctuary, the Christmas tree at one side of the altar held special meaning to Mae. When her husband, Lawson Alvin Poole, died 14 years ago, memorials donated to the church in his honor were used to purchase a new tree and better Christmas decorations for the church.

“It was kind of put under the family’s wing to get those,” Candy says.

Mae and some of her church friends also made Chrismons for the tree.

“That was Mae’s baby,” Whitley says. “That’s her Chrismon tree.”

Off to one side of the sanctuary also stands the Women’s Guild’s Christmas tree cutout. A candle goes on this tree for anyone who gives a memorial or honor gift of $5 to $25,

“That’s probably the oldest thing we do,” Whitley says.

After his retirement in 2016 as a pastor, Whitley and his wife returned to Grace Lower Stone Church as members. Whitley had served as pastor here from 1985-93 — “the eight best years of my life,” he says — and Grace Lower Stone and its people embedded themselves in the couple’s hearts.

Whitley and his wife have made plans to be buried in the church cemetery, where names such as Bost, Barringer, Holshouser, Rinehart, Kluttz, Fisher and Brown populate many of the markers.

“If you want to see a German name, just look at that cemetery,” Whitley says.

The congregation dates back to 1745-47. The church building itself was erected in 1795. Whitley says just the list of 37 pastors who have served Grace Lower Stone represent a good history of the Reformed Church in North America.

It’s easy to see why Etta Mae Poole respected her church so much and looked after it.

“Mae was literally a pillar of this church.” Whitley says.

Mae spent much of her working years as a seamstress at Carolina Maid.  She and Lawson had three children — Candy Broadway, Lonnie Poole and Carmelita Antosek.

Besides the church, Mae’s outside interests included gardening, canning, quilting and her many grandchildren and great-grandchildren.

Whitley says it’s funny, but for almost a year after he arrived at Grace Lower Stone, he thought “Mae Poole” was really one word, because most everybody said the names together. But he also learned quickly Mae was one of his go-to people.

“She was going to find some way to get it done,” he says.

Just as her church got it done for her.

1. Staff members of Rowan-Salisbury Schools reached into a dozen most-in-need neighborhoods Thursday to give away a considerable number of... read more