Football Defensive Player of the Year: Turner lived up to the hype 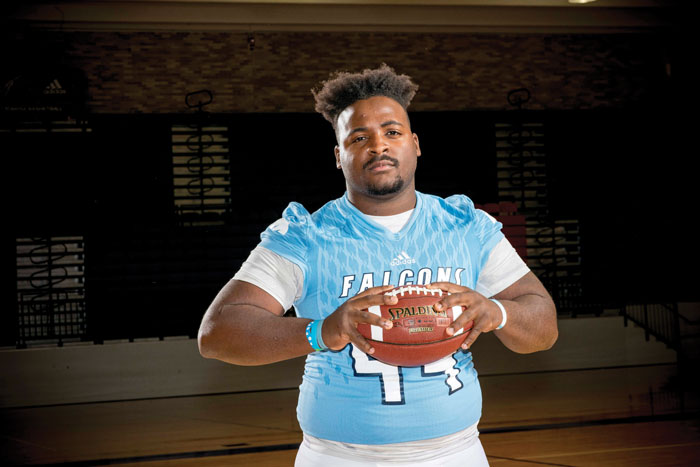 Then he went out and earned the accolade.

That’s not an easy thing to do. Turner’s reputation preceded him. Opponents game-planned to deal with him. Two blockers were often assigned to him.

Still, he kept right on being Devin Turner. He played in a new league (North Piedmont Conference) and he faced stout non-conference competition (Mooresville, A.L. Brown, Davie County, Concord, Hunter Huss), but he kept making plays. He continued to show up in opposing backfields without permission.

There were Rowan players with more sacks and more fumble recoveries and more tackles than Turner, but he probably caused as much disruption and created as many negative plays as anyone. It’s safe to say no one caused more sleepless nights for quarterbacks, running backs, offensive linemen and offensive coordinators.

“He had the year we all expected him to have,” West coach Joe Nixon said. “He was a pretty dominant player every game.”

Turner (6-1, 285) commands the line of scrimmage partly with bulk, sheer strength (he bench-presses 355 pounds) and power, but there’s more than brute force to his game. Defensive line coach Brett Graham has polished Turner’s technique every year and Turner understands the mental advantages of film study. The  three-year varsity starter also displays surprising lateral quickness. Plays designed to get to the edge, to go away from him or around him, often found Turner creating a pile of pain.

“I tried to always push myself,” Turner said. “And I had great coaches and a great group of brothers pushing me.”

The season didn’t play out as West hoped. The Falcons are never going to be content with 6-6, third place in the conference and a first-round playoff loss. Still, West went 4-0 in intra-county games, easily winning a showdown with North and extending its latest county winning streak to 11 in a row.

“Our 6-6 record was disappointing,” Turner said. “But we fought like no other against some very tough teams.”

Turner figures his finest hours were in the win at Concord. He had a momentum-changing sack and a blocked field goal to help subdue the Spiders.

His stats were similar to his junior season when he posted 85 tackles, 9.5 sacks and 25 tackles for loss.

In addition to Rowan County Player of the Year, Turner was chosen as NPC Defensive Player of the Year, an unusual honor for a guy on the third-place team. League champ South Iredell had ferocious defensive linemen, including Shrine Bowler Chandler Medeiros, but Turner still got the nod from the league’s coaches.

“He impressed people,” Nixon said. “Teams had to account for him. Teams had to try to block him. Devin plays with great energy and great tenacity. It’s just very hard for any offensive lineman to match his intensity for 40 minutes.”

Turner has overcome a serious shoulder injury to become the player that he is. He had to upgrade his efforts in the weight room  to rehab the shoulder, but the injury proved to be a blessing in disguise. It made him tougher, stronger, more determined.

“It was all a hard process,” Turner said. “But I had a lot of support to get to where I am now. Coach Graham pushed me a lot.”

Turner is on the all-county team for the third year in a row. He’s also been an all-conference player three times. He was All-South Piedmont Conference in 2015 and 2016.

West has produced many defensive players of the year, but most were linebackers. Turner is the first West defensive lineman to be honored since Eli Goodson in 2009.

Turner hasn’t made a college commitment, but there’s no doubt he’ll be playing somewhere next fall. He expects to sign in February.

“Great player, great kid,” Nixon said. “He should have some options.”