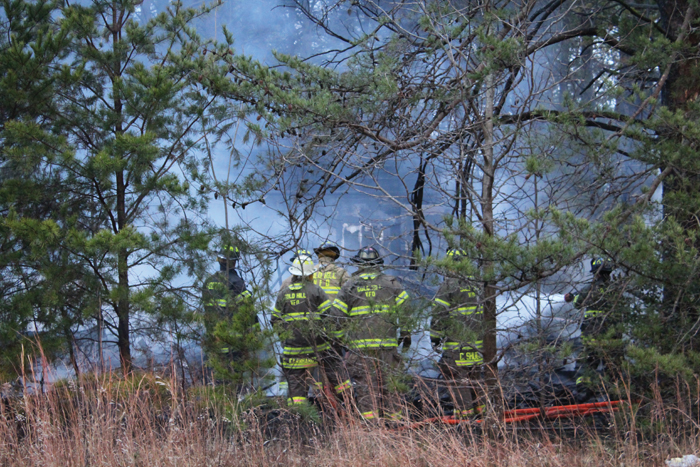 Andie Foley / Salisbury Post - Firefighters respond to a fire at an abandoned church on Saturday, Dec. 23. Gold Hill firefighters were joined by those from Rockwell, Liberty, Rowan Rescue, and Richfield.

Fire marshals are investigating a fire at an abandoned church in Gold Hill.

The fire was reported just shortly at 4 p.m Saturday afternoon. When responders arrived to the scene minutes later, the building was already engulfed in flames, said Chief Ashley Talley with the Gold Hill Fire Department.

The site, located in the 700 block of Zion Church Road, was the former location of Crown in Glory Lutheran Church. The building has been abandoned for at least 20 years, Talley said.

First to the scene was Gold Hill Fire Department assistant chief Chris Brown. He was joined shortly by Talley, who said the old structure was already near the ground by the time they arrived.

This quick burn was evidence of the building’s age and disrepair, Talley said, as both men live near the area and were on the scene in minutes.

Gold Hill firefighters were joined by others from Rockwell, Liberty, Richfield, Rowan Rescue Squad and the fire marshal’s office.

Some 10 trucks responded to the event, which was under control before 5 p.m.

Talley said that the building is not currently receiving power, leaving the cause of the blaze unknown as fire marshals investigate.

Church officials and deacons have been notified of the fire.