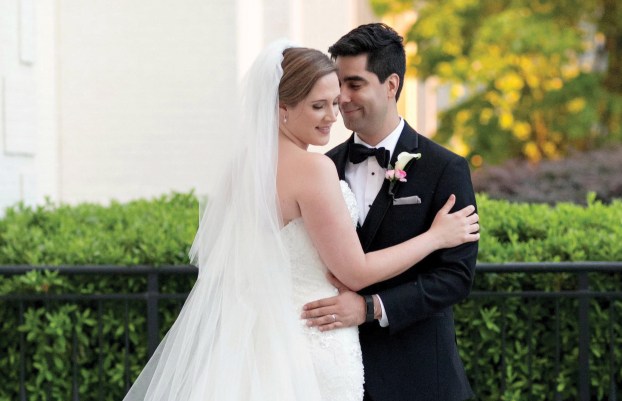 Miss Melody Lorraine Davis and Mr. Juan Carlos Flores were united in marriage on Saturday, the sixth of May, 2017 at 7:00 p.m.at Peachtree Road United Methodist Church in Atlanta, Georgia. The ceremony was officiated by the Reverend Doctor William Oslin Britt IV. The Georgia Boy Choir, directed by David White and Scott Atchison, organist and Music Director at Peachtree Road UMC, Rosemary White, pianist and Emily White, cellist provided music before and during the ceremony.

After the ceremony, guests were transported to the estate where Dr. Jose Garcia performed at the piano during cocktail hour. Dinner followed in the Grand Ballroom with entertainment provided by the Atlanta Show Band.

On the eve of the wedding, the groom’s parents hosted the rehearsal dinner at Seasons 52 in Buckhead. Cocktails were served prior to the dinner where family members from Venezuela, Spain and Texas were introduced to the bride and her family.

A post wedding brunch was hosted by the bride’s parents in the Library at the Grand Hyatt in Atlanta, Georgia.

The bride is the daughter of Mr. and Mrs. Steve (Julie) Davis of Salisbury. She is the granddaughter of the late Gene and Louise Davis of Lexington and Lorraine Kluttz Lentz of Granite Quarry and the late James U. Lentz. A graduate of Salisbury High School, Melody graduated from the College of Charleston in 2003 with a Bachelor of Science in Business Administration. Melody received her MBA from Charleston Southern University in 2010. She is currently a District Sales Manager for Meritor, Inc.

The groom is the son of Mr. and Mrs. Gustavo (Belkis) Flores of Woodstock, Georgia, formerly of Caracas, Venezuela. He is the grandson of the late Mr. and Mrs. Arnoldo Flores of Maracaibo, Venezuela and the late Mr. and Mrs. Pedro Felipe Diaz of Merida, Venezuela. A graduate of Lassiter High School, Juan graduated from Kennesaw State University in 2006 with a Bachelor of Business Administration. He will receive his MBA from Kennesaw State University in April 2018 and he is currently an Analyst for AllConnect, Inc.

The bride was given in marriage by her father. Bridesmaids included the Matron of Honor, Mrs. Jill McNeese of Atlanta, Georgia, Mrs. Melanie Davis, sister-in-law of the bride, of New York, New York, and Miss Andrea Moreno of Atlanta, Georgia formerly of Caracas, Venezuela.

The newlyweds honeymooned in Tanzania where they summited Mount Kilimanjaro and spent the remainder of their time in Africa relaxing in Zanzibar. The couple is making their home in Atlanta, Georgia.

Rebecca Lynn Gibson of Cornelius and Douglas Joseph Petrea of Salisbury were united in marriage Sept. 9, 2017 at Villa... read more