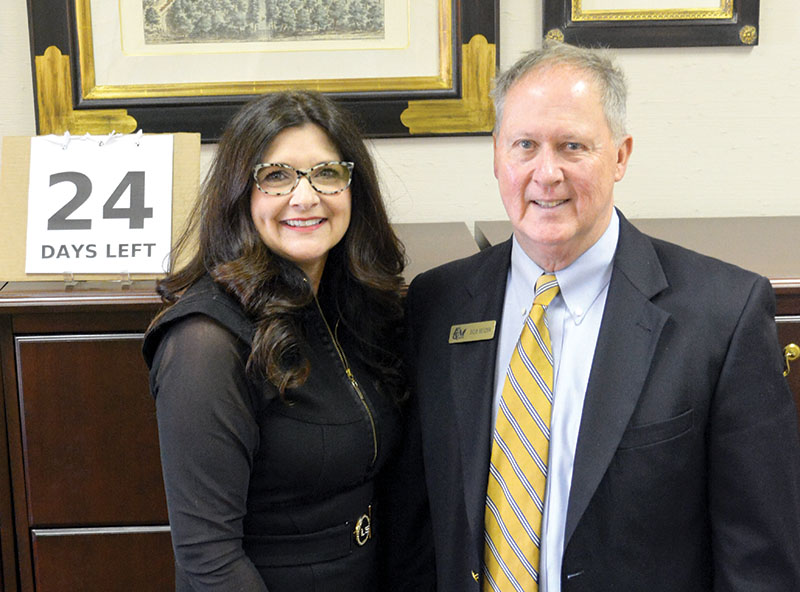 Earlier this month, longtime friends and F&M colleagues Pam Abernathy and Bob Setzer were counting down the days ’til his retirement at the end of the year. Photo by Susan Shinn Turner, for the Salisbury Post.

It seems as if everyone in Salisbury has a story about Bob Setzer. Bob, 66, retires at the end of the year from F&M, capping a nearly 45-year career in banking.

Bob, who came to Salisbury to attend Catawba College and never left, was once penalized 15 yards at a football game — as a spectator.

“That’s infamous,” Bob says of the memory. “A group of us were standing at the back of the end zone. We were playing Carson-Newman, a big rival. Our players came into the end zone after a touchdown and I stepped into the end zone to high five a player. The officials called it excessive celebration in the end zone.”

So, OK, technically, the player got called. But when Bob stepped into the end zone, the penalty occurred. Truth to tell, he’s pretty much led a life of excessive celebration.

Which brings us to the next story.

“If F&M had a mascot, it would be Bob Setzer,” says Steve Fisher, F&M’s CEO. “He’s loyal, he’s passionate, he loves this community, and he’s wonderfully wacky — everything you want in a mascot.”

Getting more serious, Fisher adds, “The reason that Bob’s had such a successful career at F&M is because his whole life is built on relationships — those deep personal relationships with his customers, with his co-workers, with his family and with his friends. That’s the same foundation on which F&M was built 108 years ago. That’s why Bob is such a perfect fit, and that’s why we’re gonna miss him.”

Bob is nervous — uncharacteristically so — about retirement. He has no idea what he’s gonna do. You can bet he’ll be spending more time with wife Pam, and their two daughters and sons-in-law, Katie and Erik Lipscomb, and Addie Laurie and Richard Reamer. Katie and Erik have two daughters, Eliza, 7, and Sallie, 5, and Addie Laurie and Richard have three children, Eleanor, 9, Mamie, 7, and Trey, 3.

The family got its start in Salisbury. Bob was the first student from John Handley High School in Winchester, Va., to attend Catawba.

“Everyone was so welcoming when I visited,” he says. “I felt it was the right fit.”

Then Pam came to Catawba from Harrisonburg, Va. They’d met briefly when she visited the school. The two renewed their acquaintance and started dating. Bob graduated in 1973 with a degree in business and economics. Pam would not graduate until 1974, so he stayed in town. The two married in 1975 and settled in Salisbury.

“In the close-knit environment we have at F&M, we kidded each other a lot,” says Paul Fisher, the bank’s chairman emeritus. “One, because we liked each other and second, it kept our energy levels up and personal relationships strong. So about every Friday, I would say, ‘Setzer you didn’t produce enough this week and I reckon I am going to have to fire you.’

He said, ‘That’s OK, I get two days off and Sue will hire me back on Monday.’ That kind of thing went on for years.

“Setzer is one of a kind. God did not make but one Setzer.”

Because there is only one Setzer, Pam Abernathy will be moving into the corner office at the end of the year. She’s currently F&M’s vice president of mortgage banking.

“Pam was hand-picked by Bob, and has been working with him for years, so there should be a seamless transition from Bob to Pam,” Steve notes.

“Bob has the greatest knowledge of the process of mortgage lending,” Pam says. “He’s very personable. He builds relationships. Bob treats all people with the same level of respect. This is one of his greatest gifts, and he takes what he does out into the community, and builds those relationships. He has taken our mortgage department leaps and bounds ahead of where it was. ‘Finishing strong’ is our daily motto, and he is going out on top. He’s finishing strong. He’s at the top of his game.”

Bob wasn’t at the top of his game 10 years ago, when he was hospitalized for two weeks at what was then Rowan Regional Medical Center. He thought he’d pulled a muscle in his leg. One morning, he woke up and couldn’t put any weight on the leg. He saw his physician, Dr. Bill Thompson, and was immediately admitted for blood clots. Dr. Myron Goodman also took care of him in the hospital.

And yet, he’d done loans for just about everyone he encountered while he was in the hospital. One morning, a nurse was in his room, taking his vitals, when Dr. Gayle Yatawara stopped by to check on him. The nurse couldn’t quite figure that out as Gayle is an OB-GYN. But Bob had done the loan for Gayle and her husband, Chanaka.

“I felt like I was getting a lot of attention,” says Bob, who later appeared in a capital campaign ad for the hospital. “It was all the relationships I’d developed.”

“Bob Setzer was one of the very first people we met when we came to visit Salisbury in 1997,” Gayle says. “We hadn’t even moved here yet and were still undecided about the move. He was so warm and welcoming. We couldn’t believe that a banker could make us feel so welcome.

“And his giggle! We couldn’t help but giggle with him. To say that Bob played a part in our decision to move to Salisbury is an understatement. And, we’ve always known that he wasn’t just our banker, he was our friend. We’ll miss him terribly at F&M, but we’ll be sure to keep our ears cocked to hear that giggle when we’re around town.”

Bob Honeycutt doesn’t mention his giggle, but he does note that Bob called him, too, about a mortgage before he moved to town from Atlanta. Bob Setzer reports to Bob Honeycutt in his role as executive vice president of F&M.

“He strikes that perfect balance between working extremely hard for the customer and working extremely hard for the bank,” his boss says. “He has a unique ability to remember your name. He is so intentional about committing your name to memory. If someone is calling you by name, it tells you that the person cares about you, that he wants to develop a relationship with you.”

The year 2008 put all those relationships Bob had so painstakingly built to the test.

“People were being laid off,” Bob says, “and that of course becomes problematic when you have a mortgage. We took it one case at a time. There were many cases of hardship — it was industry-wide. We worked with these families. The last thing F&M wants to do is to get the house. We will do whatever it takes to get homeowners back on their feet to make payments.”

There were foreclosures — but they were lower at F&M than nationwide.

“F&M didn’t get hit as hard or hurt as bad,” Bob says. “Few banks showed profits during those years. We did, and we’re pretty dadgum proud of that.”

Over the years, Bob has been active in the community, in leadership roles with Kiwanis, the Red Cross, the Y, the Crosby Scholars, and the National Sports Media Association. He and Bill Hall have both served as president of the Catawba Chiefs Club, and now serve on its board of directors.

There are many people to thank throughout his career, but Bob’s family tops the list of people who shaped him.

“My parents, John and Lucy Setzer, and my brother and sister, John Setzer III and Ann Cather, taught me love and respect and hard work,” he says.

His parents and brother have died, but he remains close to his sister, even though he’d like to see her more often.

His high school basketball coach, Jimmy Omps, taught him discipline, how to practice, how to compete, how to win and how to lose.

Bob and Bill Hall were competitors at Catawba. Bill was working there when Bob arrived. They played on opposing flag football teams.

“We’ve just been very good friends and have a lot in common,” Bill says.

The two head up the Catawba Golf Classic to benefit Catawba’s football program. When they took over, the event raised $5,000. The last outing raised $49,000. They’ve also worked together on the First Pitch event to benefit the baseball program, the Hall of Fame event, and the Silent Auction. Their latest goal is to sign 500 members to the Chiefs Club. They’re sitting at 470.

“People aren’t going to give to a cause if they don’t like you,” Bill notes. “We’ve been successful because we’ve established relationships, and because people know these are legitimate causes.”

Bob expects he’ll continue his work with Catawba and other community efforts — after a six-month hiatus.

On New Year’s Day, he and Pam, along with several close family members, will spend a couple of nights at the Greenbrier.

Maybe he won’t be so nervous after that.