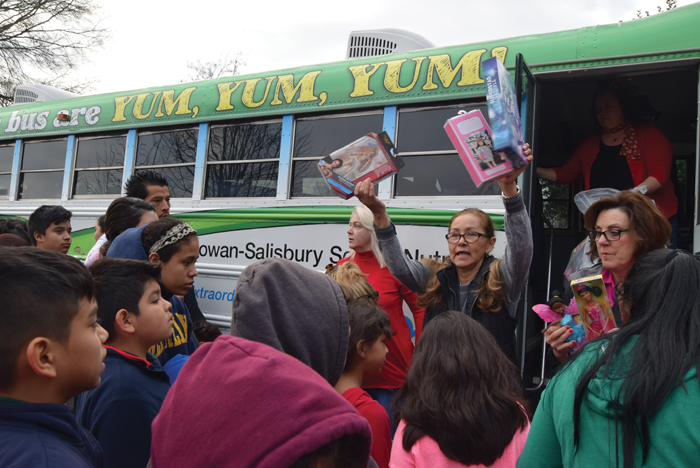 Rowan-Salisbury Schools staff collected and distributed thousands of toys to students Thursday morning in honor of Christmas. Demand was so great that staff members had to go shopping mid-event to get more toys. Rebecca Rider/Salisbury Post

Early Thursday morning, buses full of singing, Santa-hatted educators pulled into some of the county’s most in-need communities to deliver toys and food. Students thronged the buses, eagerly pointing out which toy they’d like for Christmas, or joined along in the singing while they waited.

Moody said the day was inspired by her experience on a route with the district’s Summer Feeding Program. Funded by the USDA, the program provides daily breakfast and lunch to any child throughout the summer.

“I felt like that experience was really life-changing for me,” Moody said.

And it was one she wanted to share with others in the school system. As December neared, Moody put out a suggestion among central office staff: instead of gift-giving to co-workers, she suggested they consider donating a toy to be given to a student.

Between eager educators and an anonymous donation, Moody said, staff managed to collect between 1,700 and 2,000 toys. Moody also wanted to donate food, as many children served by the Summer Feeding Program and the weekend backpack program Food for Thought are left adrift during Christmas break.

“It’s been unbelievable how generous people have been,” Moody said. “It’s like when the whole community heard they wanted to take part.”

Thursday was the first day of Christmas break for students, but on Wednesday afternoon bus drivers told kids to anticipate a special visit the next morning. Moody said staff also sent out phone messages to neighborhoods.

The planned routes were some of the same ones used during the Summer Feeding Program, where school staff knew there would be a need. Just before buses pulled out Thursday morning, Moody said the day had already grown beyond her expectations.

“It’s just been organic — it’s just taken on a life of its own,” she said.

But it was about to get bigger.

When one of the buses made its first planned stop at Matika Village off Airport Road, a crowd was waiting for it. Word had gotten out and spread, and residents lined the dirt road waiting for a gift and a bag of food.

Even with limiting giveaways to one toy per child and one bag of food per family, the bus quickly burned through its resources. School staff who worked both this event and the Summer Feeding Program said that Thursday’s crowd was much larger than the usual summer attendees.

The bus had a stock of more than 300 toys, and within half an hour it was empty. Staff estimated several hundred children showed up to receive a gift.

Other buses on the road reported similar situations. In a scramble, staff went to Five Below to shop for more toys, while buses that still had supplies drove to restock those that were out.

“We’re going to have to buy as many as we can,” Patty Overcash, administrative assistant, said.

Over the course of the planned three-hour give-away, each of the four buses had to stop to purchase more toys, staff said.

“Santa has the same problem — it will be alright,” one educator said.

But in the end, the community stepped up to help. Anonymous donors called in to stores, stores like Five Below offered generous discounts, Life Church donated money, staff members dipped into their own pockets and Landis Police drove out with bags of toys and stuffed animals. Moody herself contributed $1,000 to the cause.

And it paid off.

Lisa Altmann, director of child food and nutrition, said it was “refreshing” to visit the familiar sites and visit with children “just to see them smile.”

“It’s nice to know that we don’t just make an impact in the summer — it’s all year round,” she said.