‘Oh my!’ ‘There will never be another Dick Enberg’ 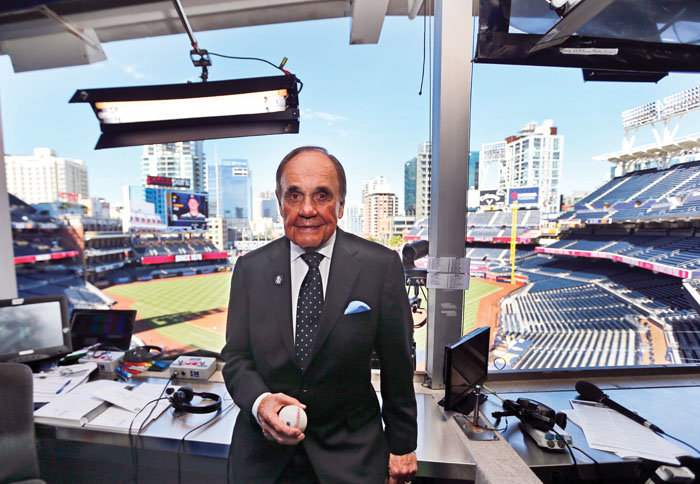 AP Photo/Lenny Ignelzi, File In this Sept. 29, 2016, file photo, Dick Enberg, the voice of the San Diego Padres, poses in his booth prior to the Padres’ final home baseball game of the season in San Diego. Enberg’s daughter, Nicole, confirmed to The Associated Press that her father died on Thursday at his home in La Jolla, a San Diego suburb. He was 82.

SAN DIEGO (AP) — Through six decades, whether it was broadcasting one of John Wooden’s basketball championships with UCLA, a no-hitter by Nolan Ryan or a dramatic point at Wimbledon, Dick Enberg excitedly summed up the big moments with two simple words: “Oh my!”

Enberg, a master at calling big events across the sports spectrum but who held a special love for baseball, died Thursday at 82.

Enberg’s daughter, Nicole Enberg Vaz, confirmed his death to The Associated Press. She said the family became concerned when her father didn’t arrive Thursday on his flight to Boston, and he was found dead at his home in La Jolla, a San Diego neighborhood, with his bags packed.

His daughter said the family believes Enberg died of a heart attack but was awaiting official word.

Enberg’s wife, Barbara, already was in Boston and was expecting his arrival.

“It’s very, very, very shocking,” said Vaz, who lives in Boston. “He’d been busy with two podcasts and was full of energy.”

Tributes poured in from around the sports world.

“To me, Dick Enberg was the greatest all-around sportscaster who ever lived and will never be emulated,” former Dodgers broadcaster Vin Scully said in a statement. “He had my respect, admiration and my friendship. He will be sorely missed.”

Scully was among the first to congratulate Enberg when it was announced three years ago that he had been chosen for induction into the broadcasters’ wing of the Baseball Hall of Fame as the 2015 recipient of the Ford C. Frick Award.

Scully read off some names of broadcasters Enberg would be joining in Cooperstown.

That was Enberg, who grew up in the Midwest, moved to Los Angeles and got his big break with UCLA basketball before expanding his repertoire to calling Super Bowls, Olympics, Final Fours, Wimbledon and the Breeders’ Cup. Besides calling eight of Wooden’s 10 national championships with the Bruins, Enberg became known in Southern California for broadcasting Angels and Rams games and, for the last seven years of his career, San Diego Padres games.

“There will never be another Dick Enberg,” CBS Sports Chairman Sean McManus said. “As the voice of generations of fans, Dick was a masterful storyteller, a consummate professional and a true gentleman. He was one of the true legends of our business.”

As their careers neared an end late in the 2016 baseball season, Scully and Enberg sat down to reminisce.

“I think we do have one thing in common about our background and I think are so blessed because of that, that we grew up in black-and-white radio,” Enberg said. “There wasn’t television and so we were able to use our memory and imagine our great heroes and what was happening and how it was being described.”

When the Padres hired him in December 2009, Enberg explained the genesis of using “Oh my!” to describe big plays.

“It’s not something that’s part of my normal conversation,” Enberg said. “I grew up with a mother who said, ‘oh my,’ a lot, usually in dismay, ‘Oh my, now what have you done?’ But it’s a Midwestern term of exclamation. People say: ‘Have you heard about so and so? Oh my!’ Or, ‘Oh my, that’s exciting!’”

Enberg said he needed a signature call after being hired to do play-by-play at Indiana in 1957, and it stuck.

He also was known for his baseball catchphrase of “Touch ‘em all!” for home runs.

“Dick was an institution in the industry for 60 years and we were lucky enough to have his iconic voice behind the microphone for Padres games for nearly a decade,” Padres owners Ron Fowler and Peter Seidler said in a statement.

Raised in Armada, Michigan, Enberg’s first radio job was actually as a radio station custodian in Mount Pleasant, Michigan, when he was a junior at Central Michigan. He made $1 an hour. The owner also gave him weekend sports and disc jockey gigs, also at $1 an hour. From there he began doing high school and college football games.

During his nine years broadcasting UCLA basketball, the Bruins won eight NCAA titles under Wooden. Enberg broadcast nine no-hitters, including two by San Francisco’s Tim Lincecum against the Padres in 2013 and 2014.

He said the most historically important event he called was “The Game of the Century,” Houston’s victory over UCLA in 1968 that snapped the Bruins’ 47-game winning streak.

“That was the platform from which college basketball’s popularity was sent into the stratosphere,” Enberg said just before retiring from the Padres. “The ‘79 game, the Magic-Bird game, everyone wants to credit that as the greatest game of all time. That was just the booster rocket that sent it even higher. … UCLA, unbeaten; Houston, unbeaten. And then the thing that had to happen, and Coach Wooden hated when I said this, but UCLA had to lose. That became a monumental event.”

Enberg won 13 Sports Emmy Awards and a Lifetime Achievement Emmy. He received a star on the Hollywood Walk of Fame, and UCLA named its Media Center in Pauley Pavilion after Enberg this year.