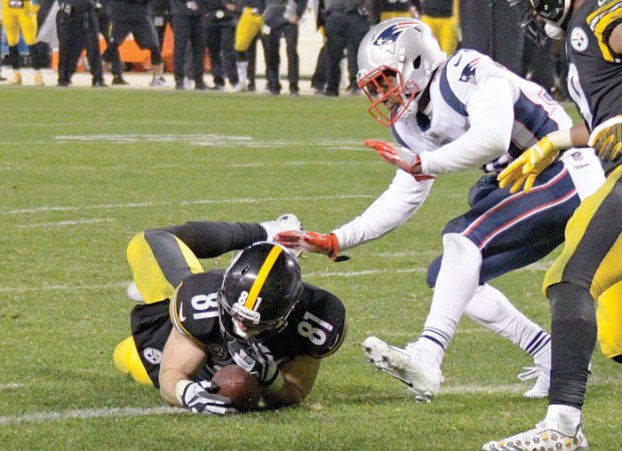 FILE - In this Sunday, Dec. 17, 2017, file photo, Pittsburgh Steelers tight end Jesse James (81) loses his grip on the football after crossing the goal line on a pass play against the New England Patriots in the closing seconds of the fourth quarter of an NFL football game in Pittsburgh. While coaches, players, fans and broadcasters become puzzled or annoyed by the NFL's "catch rule," the people in charge of developing and refining it through the years also have struggled. (AP Photo/Don Wright, File)

Great catch … Wait, there’s a catch to it

It’s a catch. Wait, there’s a catch to the catch.

While coaches, players, fans and broadcasters become puzzled or annoyed by the NFL’s “catch rule,” the people in charge of developing and refining it through the years also have struggled. They simply couldn’t find language to simplify it, leading to the inconsistency and controversy seen for seasons.

When such NFL personages as Mike Tomlin and Sean Payton, both with strong ties to the powerful competition committee, seek re-examination and possibly changes to rules, it moves the issue front and center, just as much as the call on Pittsburgh tight end Jesse James did last weekend.

“I think that we all can acknowledge that all of this needs to be revisited,” Steelers coach Tomlin said. “It’s not just that play. We’re having similar discussions week in and week out, so as a member of the committee, I acknowledge that we’ve got our work cut out for us this offseason regarding a number of those things.

“I’m just done talking about it, to be quite honest with you. You all know what we teach. Catch the football.”

Some players do, yet discover they didn’t. They’re confused by some of the calls. Even worse, they aren’t sure they understand the rules.

It should be simple, right? Receive the ball, hold onto it, get tackled and never have it move when you get to the ground.

Except there are instances when it can move as long as control is maintained. It’s just another example of an NFL rule book with so many tangents that it would crush even the heftiest offensive lineman if it fell on top of him.

“Yeah, I don’t even know what the language is at this point,” said Bears tight end Zach Miller , who lost a TD reception by not “surviving the ground” on a play in which he was injured and sidelined for the rest of the season. “I don’t think a lot of people … I don’t even know if the rule-makers do at this point know what the language is. But they have it there and it’s in place and they’re trying to follow it as closely as they can. I just don’t know if it’s what it needs to be.”

Even the current head of league officials, Alberto Riveron, and the man he succeeded, Dean Blandino, agree that getting the language right is difficult. Many others would add getting the call right is more difficult.

Two years ago, the league consulted with a group of players that included Hall of Famers Steve Largent and Tim Brown, plus current NFLers.

“And we went over this rule, a lot of the catch and no-catch situations, and at the end of the day — we had them in for two days — they decided the best way to keep the rule is where it is right now,” Riveron says. “But that does not stop us from going over it again and taking suggestions from any of the clubs.”

Those suggestions definitely will be coming. They already have begun.

Blandino got them during his tenure, too. Now an analyst for Fox, he’s hardly surprised that the spotlight is on the catch rule again.

“Every year, plays come up — Calvin Johnson or Dez Bryant or the play Sunday — that look like catches and people think should be catches,” Blandino said. “People don’t think those passes should be incomplete.

“The committee tried to write a rule to make that a catch and allow officials to call it consistently and it’s almost impossible. It was definitely one of the more difficult things to explain. You can explain the rule and reasoning and logic behind it, but a lot of people don’t agree with it, that that should be the rule.”

Oddly, the no-catch rule seems to bring little attention or controversy in the college game, even though the law is the same.

“The difference between control and possession” is how it is explained by Terry McAulay, a former NFL official who has worked Super Bowls and now is coordinator of officiating for the AAC. “He clearly had a control for much of the play, (but) he didn’t have it long enough, the control was lost when the ball hit the ground, and by rule, and I’m speaking only college, he never established possession. Whether he was down or not, whether the ball crossed the plane of the goal line is irrelevant because he’s not a player in possession yet.”

McAulay surmises that the divergent level of skill from the college game to the pros is why the catch rule comes into play so much more in the NFL.

“I think the difference is the athleticism of the players involved,” he said. “The NFL player appears to be able to do many more things once he gets his hands on the football than the college player, who is so focused just on bringing it in and making the catch.

“Now we do see this every once in a while in college, but not nearly as often as we do in the NFL.”

With the playoffs approaching, there’s little doubt the catch/no catch will come up again, perhaps even in a critical situation, as it did at Heinz Field on Sunday.

There also seems to be little question that the outcry about the rule will lead to — at the very least — a re-examination of it.

“It will definitely be on the agenda,” Blandino predicts. “Mike is on the competition committee, and any club can bring it up. They will do what they always have done: look at different examples from the season, and talk to game officials. Maybe they will talk to players and obviously get coaches’ input, and then make a recommendation.

“Maybe they tweak the language a bit, but there’s not been a change since Bert Emanuel in 2000, and the ball touching the ground and having to come loose.”

Miller knows how the public generally feels about the catch rule.

“I don’t know where this is going, where it’s already been. I feel like we probably need to bring in a little bit of common sense to this thing,” he said. “The Bleacher Report cartoon that they put out of mine a couple weeks ago where they polled a hundred guys at a bar to see if it was a touchdown or not, I think that’s kind of your best bet, because common sense is pulled in there.”

‘Oh my!’ ‘There will never be another Dick Enberg’

By Bernie Wilson AP Sports Writer SAN DIEGO (AP) — Through six decades, whether it was broadcasting one of John... read more