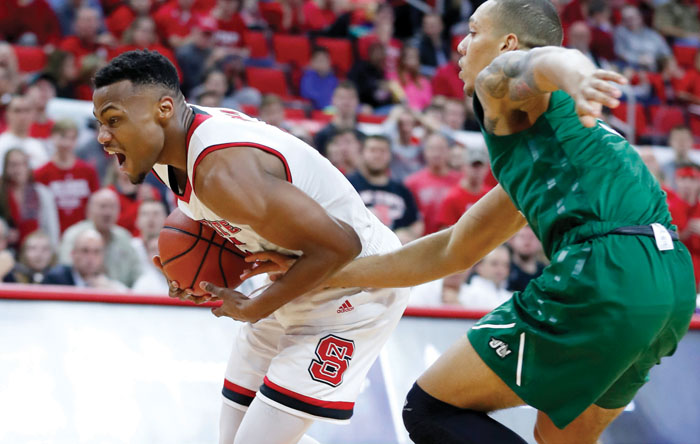 RALEIGH (AP) — North Carolina State wanted to get back to having fun.

The Wolfpack accomplished that and then some in an offensive outburst.

N.C. State was coming off a loss to UNC Greensboro and a win over Robert Morris in which it struggled for much of the game.

“We made that a point of emphasis to make sure we have fun,” N.C. State guard Braxton Beverly said. “Because in turn, that’s going to have us playing harder and playing for each other. The end result works out pretty well.”

N.C. State scored on its first eight possessions to take control and pulled away with a 24-2 run late in the first half.

The Wolfpack shot 57.5 percent from the field and made a school-record 19 3-pointers on 38 attempts.

Beverly had 15 points and 11 assists, Omer Yurtseven scored 13 points and Abdul-Malik Abu had 11 points for the Wolfpack.

Tanner Rubio had 18 points and Damien Sears had 12 for Jacksonville, which lost for the sixth time in seven games.

Jacksonville: The injury-depleted Dolphins were no match for the Wolfpack. Potential starters Aamahne Santos and Antwon Clayton have not played this season after getting hurt before the first game, and starters Jace Hogan and Devin Harris missed their second and third game in a row, respectively.

“If we don’t play really, really well and really exact in games like this right now, we’re going to have trouble,” Jacksonville coach Tony Jasick said. “You saw that tonight.”

N.C. State: The Wolfpack’s final nonconference tune-up went as well as they could have hoped. They shared the ball, dominated the glass and played defense with energy, rendering the second half meaningless in terms of determining the game’s result.

“I’m very proud of our guys’ effort,” N.C. State coach Kevin Keatts said. “I thought this was the best game we’ve played as a team.”

Freeman had shot just 8 of 34 (23.5 percent) from the field in last three games, but he bounced back to make a career-high seven 3-pointers on 11 attempts. He made just 1 of 10 shots in N.C. State’s previous game.

“I knew this game was going to come sooner or later,” Freeman said. “A lot of my shots have been right there. . I saw the first one go down. From there, it was a wrap.”

“All things considered, with all of the new guys and new pieces and the ups and downs that we’ve had, I’m excited where we’re at right now.” — Keatts on heading into conference play

Yurtseven rebounded each of N.C. State’s first five missed shots. The Wolfpack scored on each occasion, totaling 12 points on those possessions thanks to a pair of 3-pointers. Radwan Bakkali grabbed Jacksonville’s first rebound six minutes into the game.

For much of the first half, the Dolphins ran weave action on offense to milk the clock before trying to score once the shot clock reached 10 seconds. The strategy worked perfectly on a few possessions, two of which ended in 3-pointers by Rubio.

Jacksonville returns home to play Middle Georgia State on Thursday before facing another tough test at Michigan on Dec. 30.

N.C. State opens Atlantic Coast Conference play at Clemson on Dec. 30. The teams have split their last 12 meetings over the past eight seasons.