A change of paths: Carson’s first secretary to retire 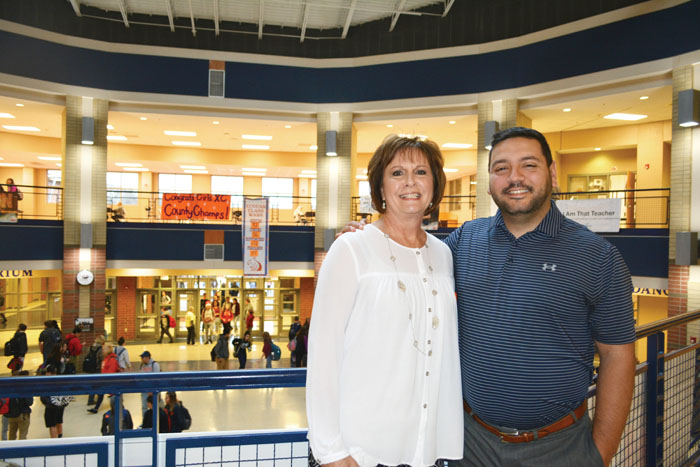 During her tenure at Carson, Stacey has worked with three principals, including Angelo DellaSanti. Photo by Susan Shinn Turner, for the Salisbury Post.

CHINA GROVE —  For 10 years, Stacey Barnhardt hid herself away in an office at Catawba College.

Her son, Bradley, died Jan. 2, 1996. She tried working at his orthodontist’s office, because she wanted to be where he had been. Later, she went to Catawba as a secretary in the physical education department.

“I found a nice little place to heal,” Stacey says. “In the Catawba community, they embrace you and you embrace them.”

Eventually, she heard a new high school was being built in the southern end of Rowan County, where she and husband, Terry, still live. She felt like it was time to come home, and became Jesse C. Carson High School’s first front-office secretary.

“I remember saying, I think I know where my path is going,” Stacey says. “When you lose a child, your hope is crippled, but not lost. When I came to Carson, my hope grew as I watched kids reach for their dreams.”

Stacey went from hiding away to being the first face students and staff saw when they entered Carson High School each morning.

“I began to get excited,” Stacey says. “I helped select the school colors, and bought everything I could to wear that was orange and blue.”

“He embraced the newness and he led us in such a way that it became a family,” Stacey says.

At Catawba, Stacey had worked for Dr. Bill Russell.

“He had talked to me when we were putting together our staff,” her former principal notes. “He recommended that I talk to her. Her work ethic was just outstanding, as was her disposition and personality. She’s the first person people see when they enter Carson. She’s always pleasant. She never gets frustrated or rattled. I could not have asked for anybody to do it any better than she did.

“As pleasant as she is, she’s not a pushover. She was going to play by the rules, policies and procedures, just like it’s supposed to be done.”

Stacey had wanted to work where Bradley had been, but found many connections to him at her new job. Many of Carson’s teachers had come from South.

“Many of the teachers had gone to school with Bradley or taught Bradley,” Stacey says. “So there were many familiar faces and names.”

Every day, Stacey says, is so very different. “But when you clear the phones and answer the questions, you feel good about it, because you’ve helped kids and parents.”

After 11½ years at Carson, Stacey will retire Jan. 19. She’d planned to leave at the end of the year, but Principal Angelo DelliSanti asked her to stay until first-semester testing was done.

“I have loved what this has been over these past 11 years,” Stacey says. “We’ve had so many friends and family who have held us up. This is just a change of paths.”

Stacey looks forward to spending more time with her close-knit family, which includes her husband of 44 years and their daughter, Brittney, a teacher at China Grove Middle School. Her parents are R.C. and Dotty Stafford of Kannapolis and her mother-in-law is Geneva “Bill” Peeler.”

“I want to spend more time with my parents and mother-in-law,” Stacey says, “and we want to support Brittney in everything she does.”

Stacey says that Terry is “absolutely” her best friend. Instead of breaking them apart, Bradley’s death brought them closer together, she says. “If you’ve ever become one, that’s when you have to.”

Stacey, 62, started thinking about retirement this past spring.

“You have to lay it out there and pray about it,” she says. Terry’s retired twice, once from Food Lion and once from Walmart in his career in the grocery business. They both volunteer with Relay for Life and are hospice volunteers. She wants to do more of that, and more volunteering in general, she says.

Kelly Carpenter was also praying about a change of career. She begins work Feb. 1 as Carson’s new front-desk secretary following a 28-year career in banking. She’s been training with Stacey until she starts full-time.

“I’m super excited,” she says, “but I’ve got some really big shoes to fill.”

Kelly and her husband, Jimmy, have two sons, Corey, 28, and Dylan 22, a graduate of Carson.

The school’s faculty recently made a video for Stacey. In it, they talk about her sweetness, her kindness, the fact that she’s like an angel on earth.

“They said she’s the heart of Carson, the face, the smile,” the principal says. “That is so true. I think what makes someone great is when they’re a servant. That is what describes her, and that’s why people love her. She’s here to serve the needs of every single person in this community.”

Alex Reynolds, drama teacher, says that Stacey has singlehandedly sold more tickets than anyone else to the school’s productions.

“If you’re really invested in the school, that’s where you spend your time, and that’s what you want to do,” she says.

She was deeply touched by the video.

But she adds, “I think it’s kinda time to go home. There are things I need to do. I have run pretty hard.”

That includes cleaning out Bradley’s closet.