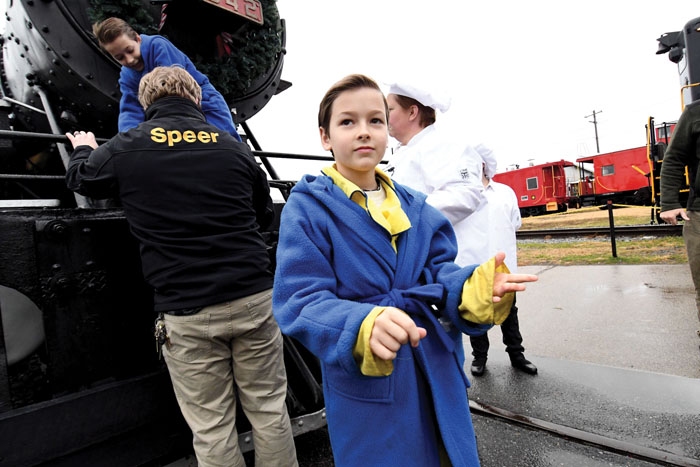 Jimmy Jones is playing one of the roles as Hero Boy on Polar Express, his twin brother Jacob (left) is playing the same role on another train. The Jones family from Fort Worth, Texas has been making weekly trips to Spencer to perform as characters in the popular Polar Express productions at held at the North Carolina Transportation Museum since November. Jon C. Lakey/Salisbury Post

SPENCER — Though they each had three Polar Express performances ahead of them Wednesday evening, 11-year-old twins Jimmy and Jacob Jones were more excited about something else — a sleepover at a friend’s house.

The Jones boys from Fort Worth, Texas, have been the lead characters of the nightly Polar Express productions at the N.C. Transportation Museum. They have played the role of “Hero Boy” since mid-November, with one boy assigned to each of the two Polar Express trains.

They wear blue robes over yellow pajamas, interact with conductors, do the hot chocolate dance and help take passengers through the storybook trip to the North Pole.

As much fun as that has been, the boys relish even more the new friends they’ve made over the past month — local kids who’ve been there every night with them.

“I like it, meeting all the people,” Jimmy says. “I have a bestie; his name is Drew.”

Nearby, Jacob echoes the sentiment. And his new bestie is a boy named Thomas.

Polar Express, a trademark production in its fourth season at the Transportation Museum, has sold more than 52,000 tickets this year. It winds up tonight.

Jimmy and Jacob have hardly been the only representatives of their family to take part in Polar Express.

Older sister Madison, 14, and their mom, Marlain, play chefs on the Polar Express trains, and 9-year-old brother Matthew is Know-It-All and an elf.

The husband and father to this crew, Jeff Jones, used vacation days last week to stay with his family and also take on a conductor’s role on one train. Now he’s back on the job with American Airlines in Texas.

Thanks to the airline connection, the family has been able to afford six roundtrip flights between Texas and North Carolina for rehearsals and shows. They also have made the long drive.

During the first month, Polar Express was offered on Fridays through Sundays. There have been continuous nightly performances since Dec. 14.

Madison enjoys handing out hot chocolate and cookies as a chef, and she recounts her favorite story of watching a youngster, who started out the Polar Express train ride not believing in Santa Claus, changing his mind by the end of the experience and proclaiming, “Santa is real!”

The only negative to the whole experience?

“I want to sleep in my own bed,” Madison says.

The family has been staying at a hotel in Concord. In their spare time, they have done things such as visit Lazy 5 Ranch and gone out to lunch with new friends.

The end of her family’s Polar Express run is bittersweet for Marlain Jones.

“It’s sad right now, because they’ve met all these friends,” she says.

Come the beginning of the new year, the children immediately begin rehearsals in Fort Worth for children’s theater productions. Madison will have a part in “Anne of Green Gables.” The boys will be in “The Wizard of Oz.”

Marlain learned just recently — and she told Jimmy and Jacob on Wednesday — that the boys have been nominated for Column Awards back in Texas for their supporting roles in “Phantom,” which played this past fall at the Artisan Center Theater.

Each boy, in separate casts, played the role of young Erik.

Jacob earlier this year had a part in an off-Broadway production of “Beauty and the Beast.” JON C. LAKEY / SALISBURY POST Matthew Jones plays the part of the Know-It-All on one of the two trains that take part in the Polar Express. The Jones family from Fort Worth, Texas, has been making weekly trips to Spencer to perform as characters in the popular Polar Express productions at held at the North Carolina Transportation Museum since November. Thursday, December 21, 2017, in Spencer, N.C.

Madison has been acting since she was 10. The boys were in their first show as 8-year-olds. The theater has become a big part of their lives. Madison’s 14th birthday came on the first night of Polar Express.

“I think theater gives them a good opportunity to gain confidence as individuals,” Marlain says.

She also sees it as a way for the kids to give back. She often tells them how performers can sometimes inspire changes in people’s lives.

Marlain has always home-schooled her children.

“We finished up at Thanksgiving so we could do this,” she says.

Marlain also serves as the kids’ agent of sorts. She searches shows and auditions that might be a good fit. She says Jimmy and Jacob in particular, because they are twins and can substitute for each other in one role if needed, draw strong interest from casting agents in New York.

There were other Polar Express productions closer to home, but the one at the N.C. Transportation Museum was bigger, would pay the boys for their roles and offered opportunities for Madison, Matthew and Marlain as well.

Director Chris Speer was immediately interested when he learned of the possibility of having Jimmy and Jacob as Hero Boy for each of his trains. He says they’ve been fantastic, and he can tell their experience has helped them.

“They listen to my directions a lot better than Hero Boys of the past,” Speer says. “They use what I give them on the stage.”

This is Speer’s second season as director, and he has been involved from the beginning as a designer.

Speer says he can tell Jimmy and Jacob apart by looking at their haircuts. Plus, Jacob’s voice is a tad deeper. Both boys wear glasses, but they take those off for their Polar Express roles.

Marlain Jones and her brood will be hitting the road back to Texas on Saturday in the family car Jeff left with them last week.

They’ll be leaving a lot of besties behind.