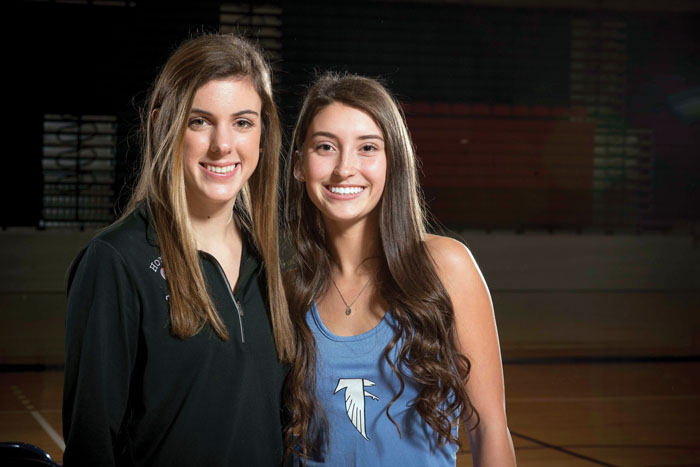 SALISBURY — Bargain hunters got another two-for-the-price-of-one deal this autumn.

“I’m happy to share with Maria,” said Holt, a West Rowan junior who went 11-1 at first singles and 7-2 as a doubles player. “Let’s face it, she’s a really good player. And although I’ve never gotten to play her, I love her and her game.”

Capito, a senior who helped Salisbury capture the 2A state championship, offered mutual admiration of her on-and-off-the-court friend.

“I think we both deserved it — just like last year,” she said. “Yes, we play in different leagues but we both worked very hard for this. She’s a great player with a good attitude and nice personality. Whenever we’re together, we kind of click.”

Holt’s sunny disposition helped her sweep through the North Piedmont Conference season without a loss. “I was excited about playing in a different conference, but worried at the same time,” she said. “I wasn’t sure how the competition level would be. But I think it helped me because the other conference (South Piedmont) was much tougher with Concord and Cox Mill.”

Holt’s only singles setback came in the 3A regional tournament, where she lost 6-0, 6-0 to eventual state champion Rose Kenny of Charlotte Catholic.

“The games were close, but it was her match all the way,” Holt said. “I’d played her in the past and it was always like that.”

Unlike Capito, Holt is a year-round player who has represented North Carolina in club tournaments. West coach John Brown said the easiest part of his job was to pencil in her name.

“No matter what match it was, you always knew you were going to get two (victories) from her,” he said. “As good as she was, she didn’t make the state individual tournament because our region is unbelievable. It’s pretty much the player who wins our region, wins the state — and probably will for the next few years.”

Holt will return for her senior season with an eye on a college scholarship. “I’m sure somebody would love to have her,” Brown said. “She’s a great kid, great grades, just wonderful to have on your team.”

“Oh my gosh, that was amazing,” she said, an exclamation mark punctuating her words. “That was my dream all through high school. We finally accomplished it.”

Capito went 19-1 at first singles and 14-1 in doubles. Her lone setback came in the Hornets’ early-season, non-league loss to Concord.

“You know what?” she offered. “Losing that match actually helped me with my technique. I had to plan where I was going to hit the ball — and I’d never done that before. I’d never thought of it like that.”

“She earned it,” he said. “A dedicated player who did all of her own work on the court. She made herself better.”

Capito also plays basketball and soccer for Salisbury, but her future is elsewhere. She hopes to pursue a pre-dental/pre-med path in college and has been accepted at South Carolina, with applications to UNC and N.C. State pending.

“I got offers from Division II and III schools to play tennis and maybe basketball,” she said. “But I’ve decided not to do that. I want to focus on school for the next part of my life. Maybe on the weekends, I’ll play some tennis.”

No matter what, her 2017 season will remain a cherished memory.

“It wasn’t a stressful season at all,” she concluded. “We wanted to make it fun and it was.”