Amid distractions, Panthers getting ready for Bucs 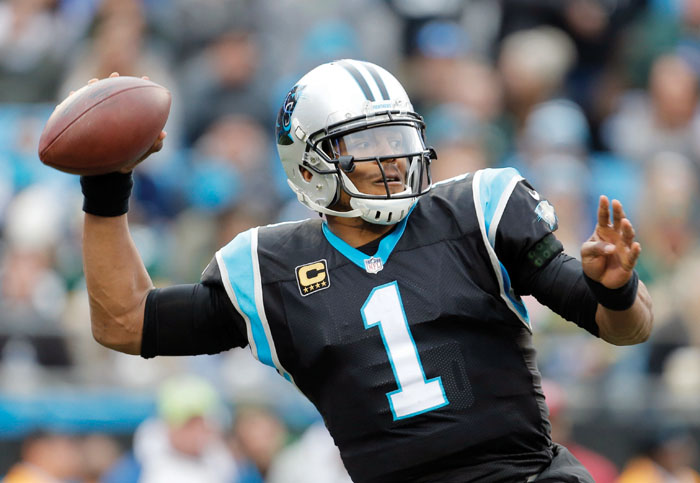 FILE - In this Sunday, Dec. 17, 2017 file photo, Carolina Panthers' Cam Newton (1) looks to pass against the Green Bay Packers during the second half of an NFL football game in Charlotte, N.C. The Panthers (10-4) can reach the postseason for the fourth time in the last five seasons under coach Ron Rivera with a win Sunday, Dec. 24, 2017 against the slumping Tampa Bay Buccaneers. (AP Photo/Bob Leverone, File)

CHARLOTTE (AP) — The Carolina Panthers find themselves on the brink of clinching a playoff spot despite a season filled with off-field distractions.

The Panthers (10-4) can reach the postseason for the fourth time in the last five seasons under coach Ron Rivera with a win Sunday against the slumping Tampa Bay Buccaneers (4-10).

The Panthers, who’ve won six of their past seven games, are tied with New Orleans atop the NFC South, but the Saints hold the head-to-head tiebreaker. The Panthers would need to win out and the Saints to lose one of their remaining two games to win the division.

It is the type of consistency the Panthers have been striving for since coming into the league in 1995. Prior to 2014, the team had never been to the postseason in back-to-back seasons.

The Panthers didn’t get to this point without overcoming their fair share of distractions.

Carolina’s season has been a soap opera of epic proportions, beginning with owner Jerry Richardson’s surprising decision to fire general manager Dave Gettleman on the eve of training camp — and then replace him with former GM Marty Hurney.

The Panthers later lost Pro Bowl tight end Greg Olsen for more than two months to a broken foot (he’s since returned) and traded No. 1 wide receiver Kelvin Benjamin to Buffalo. Then came Cam Newton’s sexist comment to a female reporter, which drew harsh criticism for the league’s 2015 MVP and cost him a sponsorship deal.

And in the coup de grace, Richardson stunningly announced Sunday he’s putting the team up for sale after the season following a bombshell report from Sports Illustrated detailing alleged sexual and racial misconduct in the workplace. Richardson remains under investigation by the league.

“I’ve heard an analogy in one of our meetings: The calmest part of a tornado is right in the middle of it,” Newton said. “We’re trying to have a great attitude that’s contagious professionally that people can leech from and say, ‘Man, look how Cam’s preparing. Look how Julius (Peppers) is preparing. Look how Luke (Kuechly) is preparing — he’s not letting these things get to him.’”

Five things to know about the Bucs-Panthers game:

NO THOMAS DAVIS: The Panthers held the Buccaneers to three points earlier this season in Tampa, in part because of the play of outside linebacker Thomas Davis. But the 2015 Walter Payton Man of the Year won’t be on the field Sunday because he’s been suspended one game by the NFL for an illegal hit on Packers wide receiver Davante Adams last week. Davis apologized for the hit, saying he meant no harm and Rivera said the hit wasn’t intentional.

David Mayo will start for Davis, who won an appeal to get the suspension reduced from two games. The good news for the Panthers is their other starting outside linebacker Shaq Thompson is expected to return after missing two games with plantar fasciitis.

BANGED-UP BUCS: The Panthers will be facing a banged-up Buccaneers team that placed five players on injured reserve, including two of their top rookies, safety Justin Evans and tight end O.J. Howard, after their Monday night loss to Atlanta. Evans is currently tied for third among rookies in interceptions (three), while tying for fourth in total tackles (66). Howard has six receiving touchdowns this season, tied for the NFL rookie lead and the fourth most by a Buccaneers rookie.

“We had a flurry of injuries this last game for whatever reason,” coach Dirk Koetter said.

NEWTON ON THE RUN: Newton has been a huge factor running the football over the last seven games. Newton has run 65 times for 432 yards and two touchdowns during that span. The threat of him running has helped open other facets of the offense.

“They are running him more,” Smith said. “He is their leading rusher in terms of average, so he is a guy that we’ve got to make sure we can get him on the ground and have guys that are going to be shadowing him on certain defensive calls.”

THE REAL McCOY: Gerald McCoy and the Bucs may be out of playoff contention, but the 2017 Pro Bowl defensive tackle said there is still something to play for.

CORNERBACK TANDEM: Panthers starting cornerbacks James Bradberry and Daryl Worley went 12 weeks without an interception. Now they each have a pick in the last two games as takeaways are suddenly coming in bunches for Carolina.