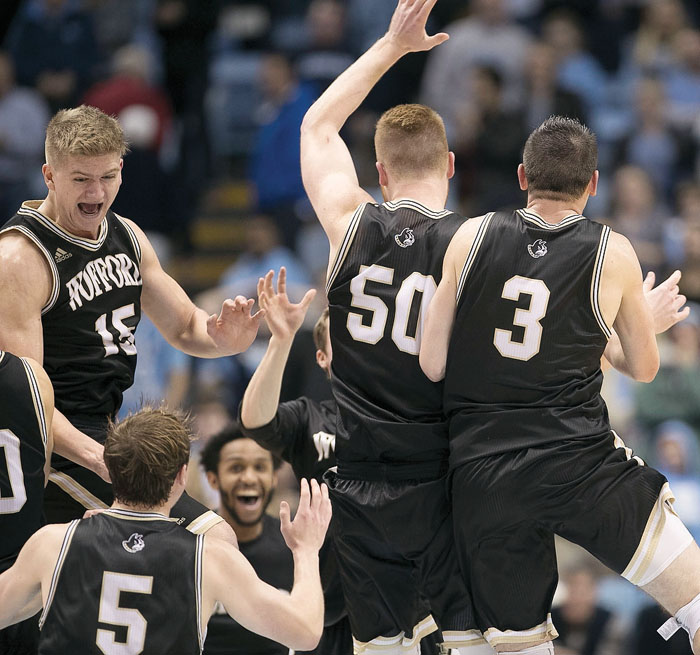 By AARON BEARD, AP Basketball Writer
CHAPEL HILL, N.C. (AP) — Wofford coach Mike Young walked into his postgame news conference wearing a soaked dress shirt and sheepishly drying himself with a towel.
“Pardon my appearance,” Young said, “a little over-exuberance from my team.”
It’s OK, coach. Beating fifth-ranked and reigning national champion North Carolina — on the road, no less — deserves a hearty celebration.
Fletcher Magee scored 27 points to help the Terriers stun the Tar Heels 79-75 on Wednesday night, snapping UNC’s 23-game home winning streak.
The Terriers (8-4) led the entire second half and by as many as 14 points before holding off UNC’s late-game run for their first win over a ranked team in 23 games.
The Terriers closed it out with four straight free throws in the final 15.2 seconds to seal it, then mobbed each other at midcourt as the horn sounded and the Tar Heels (10-2) headed to the tunnel.
It was in the locker room, Young said, that his team dumped a cooler on him as part of a celebration that left him a bit embarrassed as he pointed out it was only one regular-season win.
And yet, he also understood: what a win it was for a team picked to finish sixth in the Southern Conference.
“I grew up in Virginia,” Young said. “This was my team, Coach Smith, and you see all those banners up there, and I can think back to (John) Kuester and (Walter) Davis and (Phil) Ford, all those guys.
“And to bring a team in here and not only compete and fight and do some really good things — but win — holy cow, that’s a mouthful.”
The Tar Heels got within a point twice and missed four 3-pointers for the tie in the final 6 minutes. But they never could overtake the Terriers, who played confidently and kept counter-punching every time UNC made a run.
“We’ve got to by God be ready to play and not act like we’re prima donnas, (that) we’ve got North Carolina (on their jersey) and we can walk out there and the other team is going to fold,” UNC coach Roy Williams said. “That team outworked us.”
Joel Berry II scored 23 points to lead UNC, which suffered its first home loss to an unranked team while ranked in the top five since falling to Boston College in January 2009.
“They just had the momentum,” Berry said, “and it’s hard to get it back on your side when they’re just coming out here and playing with more effort than you.”
BIG PICTURE
Wofford: The key sequence came at the end of the first half, where Wofford ran off eight straight points to take a 34-33 lead. Then the Terriers made 10 of 15 shots out of the break to steal momentum and put UNC in catch-up mode. More importantly, they never folded as UNC tried to rally.
UNC: This wasn’t the way the Tar Heels wanted to follow a tough weekend road win at No. 21 Tennessee. They were often sloppy with the ball and struggled to get consistent defensive stops. Luke Maye struggled offensively (17 points on 4-for-16 shooting) and UNC shot just 36 percent.
“Bad movement, bad defense, bad coaching — we got fat and happy,” Williams said. “It was a disgusting thing for me the entire game.”
MAGEE’S ROLL
Magee, a 6-foot-4 junior, entered the day as the nation’s No. 2 scorer (24.1 points) while leading the country in made 3s per game (4.73). He made 10 of 23 shots and 4 of 12 3s against UNC, several on tough looks.
“That’s what kids in mid-major schools like us, that’s our opportunity, one of our best opportunities we get the whole year,” Magee said. “This game was marked and big for us.”
JOHNSON’S DEBUT
Pittsburgh graduate transfer Cameron Johnson has finally made his regular-season debut for UNC. He missed the opener with a neck injury then the next 10 games after knee surgery five weeks ago.
Johnson had 10 points, mostly from a 7-for-8 showing at the line, in 17 minutes.
UNC’S HOME SUCCESS
The Tar Heels had won 22 games in the Smith Center and a relocated game in Greensboro against Notre Dame last season during its home winning streak. It was UNC’s first home loss since February 2016 against rival Duke.
UP NEXT
Wofford: The Terriers visit UNC Greensboro on Dec. 30 in Southern Conference play.
UNC: The Tar Heels face Ohio State on Saturday in New Orleans for the CBS Sports Classic.
___