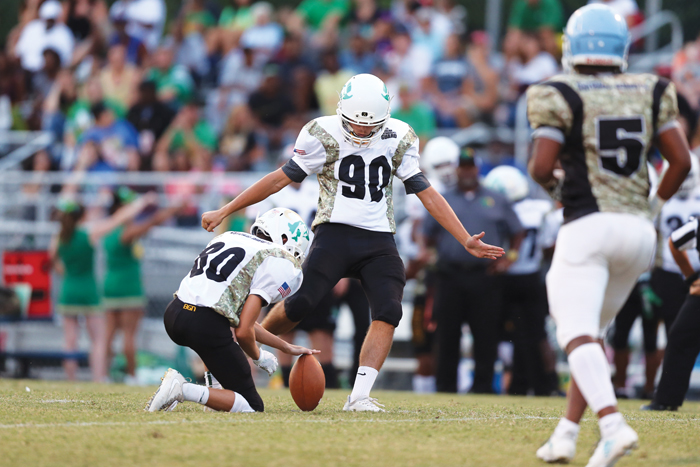 James Sipes file photo/for the Salisbury Post ... North Rowan’s Jacob Young (90) kicks a field goal against West Rowan during a game this season. Spencer Everhart (80) is the holder. Young was named the All-State punter on Thursday.

SPENCER — When South Rowan’s Marshall Long, a Georgia recruit and an Army All-American Bowl selection, averaged 46.5 yards per punt, he shattered the existing county record. It  appeared that mark might last a century.

The AP is the official All-State team, the most respected. It’s based on a compilation of votes by sportswriters from Wilmington to Asheville.  Young’s prodigious stats gave him a chance to be considered  by men and women who had never heard of him before the ballots were sent out.

“We’re just really excited for Jacob,” North coach Ben Hampton said. “What a huge honor for a kid from our school to be honored as the best punter in the state across all classifications, everyone from 1A to 4A. He earned this. He put in the work for four years. He made himself what he is, especially as a punter.”

Young unloaded a 71-yard punt. He put seven punts inside the 20-yard-line, so he wasn’t just hammering balls as far as he could to boost his punting average.

He also handled place-kicking duties for the Cavaliers. He nailed a 47-yard field goal. He had a near-miss 51-yarder that bounced the wrong way off the cross bar.

He was almost as proficient kicking off as he was on punts. He put 40 of 60 kickoffs in the end zone for touchbacks.

“He was a game-changer,” Hampton said. “No doubt about it.”

As a four-year varsity player, Young kicked 19 field goals and 127 PATS for the Cavaliers.

There is no doubt Young is a next-level player. The stats speak volumes and his grades and standardized test scores are excellent, but there haven’t been any official offers yet.

Hampton said there is significant recruiting interest from a wide range of Division I and II schools. Having All-State next to his name can’t hurt.

“Someone will give him a chance and they’ll get a steal,” Hampton said.

Young and the rest of the All-Rowan County team will be featured in Sunday’s edition of The Salisbury Post.

Former Catawba College player Sam Greiner led Harding to a 4A state championship and was honored as AP Coach of the Year.