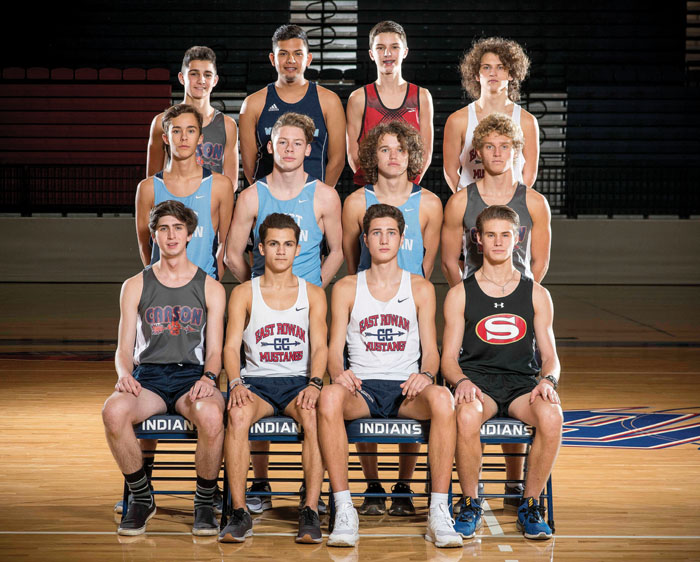 SALISBURY — Sean Incardona, cross country runner of the year for Rowan County boys, isn’t spectacular. He’s not a phenom, but he’s never been concerned about what he’s not.

What the East Rowan senior is — is sincere, staunch, reliable, steadfast and consistent.

“Sean has exemplified the tradition of East Rowan cross country with his dedication, commitment and hard work these past four years,” East coach Rick Roseman said. “He joins 12 other runners from East who have won the award, and he’s qualified for two state meets. I’m very proud of him.”

You can set your watch by Incardona in any cross country meet, no matter how tough the course. After 17 minutes, he’s going to be crossing or nearing the finish line.

Incardona was the first victor in the Rowan County Championships since 2006 who failed to break 17 minutes at Dan Nicholas Park, but he was fine with 17:12. He maxed out for his team, achieved the best possible score for his team. That’s all that mattered.

“Individually, I kind of hit a plateau at 17 minutes,” Incardona said.

In the 3A North Piedmont Conference Championships at Salisbury Community Park, Incardona placed third in 17:11. In the 3A Midwest Regional at McAlpine in Charlotte, Incardona ran 17:00 for 24th place. He was an individual qualifier for the 3A State Championships in Kernersville, where, predictably, he ran 17:00. He was 51st.

“My best race of the year was actually the NC Runners Elite in early October,” Incardona said.

Some of his East teammates used to thrash him when they competed at Erwin Middle School.

“I was faster than Sean then,” East senior Chase Whitley said. “But once Sean got started with running, he kept getting better. He’s just so competitive and he was determined to get better.”

At the Rowan County Track and Field Championships last spring, Incardona was huge for the Mustangs. He placed second in the 800, 1600 and 3200, while helping East take second in the 4×800. That’s a lot of points.

He credits all-county teammates Whitley and Ross Alexander for getting him to try cross country for the first time. He placed sixth in the county as a freshman. He was third in the county championships as a sophomore, and ascended to runner-up as a junior. As a senior, he finally heard the cheers that are showered on the champion.

“I credit Coach Roseman for all my success,” Incardona said. “He always believed in me, just as he believes in everyone on our team. He wants us to keep reaching out to be better, to carry athletics as far as we can go.”

“He’s just starting to realize how good a runner he can be,” Roseman said.

Noah Julian, a South freshman with outstanding running genes, may be the future of Rowan cross country. Runner-up in the county championships,  he was a state qualifier and ran 17:14 in the 2A State Championships.

West  junior Thomas Waldo was a 3A state qualifier and ran 17:20 in the 3A State Championships. He also led a West squad that was supposed to be depleted by the loss of four all-county runners to a repeat county team title. His effort helped make West’s Scott Foster the Post’s Coach of the Year.

West’s Luke Hager and Oscar Bautista were all-county for the second time. Hager also was all-county in soccer during the fall season.

Salisbury senior Keegan Dillon placed eighth in the CCC Championships and is all-county for the second time.

East’s Alexander made all-county for the third time.