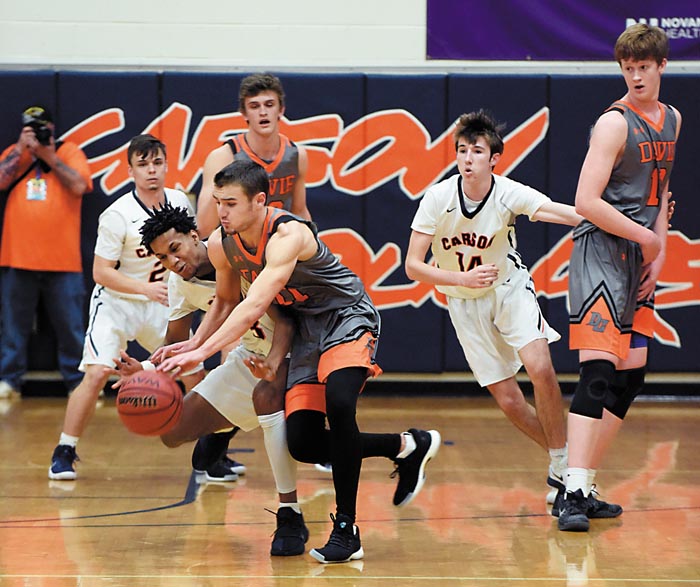 Carson's Jamarius Hairston (23) and Davie's Cooper Wall (11) go for a loose ball during their recent game. Photo by Wayne Hinshaw, for the Salisbury Post

Well, last season’s champion, West Rowan, is the No. 8 seed in the eight-team field that will battle in the event at Catawba College’s Goodman Gym, Dec. 28-30.

West is a decent 4-5, but that still left the Falcons, who took on teams such as Cox Mill, tied for the worst pre-Christmas record with South Rowan. South won Thursday night’s coin flip for the seventh seed when South athletic director Angie Chrismon correctly called tails.

But it’s not like West is bad.  West beat No. 3 seed North Rowan.

The Falcons still have Rowan County Player of the Year Caleb Mauldin, a 6-foot-8 senior who has scored more than 1,600 career points and presents problems for every opponent. West also has coach Mike Gurley, who has won the tournament two of the last three seasons and six times total, more than anyone in history.  Gurley enters the storied event with 497 career wins. Will he get No. 500 in the Moir championship game? It’s not probable, but it’s possible.

There are numerous obstacles for West to confront, including undefeated first-round opponent, top-seeded Carson (9-0). The Cougars are shooting the lights out and in seniors Jamarius Hairston and Jailen Williams they have two of the county’s marquee players. Owen White, the South Carolina baseball signee, and Cole Perry, coach Brian Perry’s nephew, probably are somewhere in the top 10 on the best-in-the-county list.

Carson, now in its 12th season as a high school, has never won this tournament.

Also undefeated is second-seeded Salisbury (8-0). The Hornets have won the event 14 times and definitely could make it 15. Coach Bryan Withers has the county’s deepest squad, a sensational point guard in Trell Baker and a good big man in 6-foot-5 Bill Fisher.

The third and fourth seeds weren’t official until a good-shooting Davie County squad lost in double overtime to unbeaten Statesville Christian late Thursday night. That result put North Rowan (5-1) in the N0. 3 slot for a first-round matchup with No.6 East Rowan (5-5). New coach Martin Unger has the 1A Cavaliers, who get strong rebounding from Brevin Goodlett and Dayjuwon Cooke, playing well.

As the No. 4 seed, Davie, coached by three-time Moir champ Mike Absher, landed in the prime-time 7:30 p.m. game for the first round. The War Eagles (7-2) take on fifth-seeded North Stanly (5-3), a newcomer to the tournament.

The girls field doesn’t appear to be as deep.  There’s a clear-cut top four. Any upset in the first round would be a major surprise.

Unbeaten Salisbury (8-0) is the defending champ and the No. 1 seed and will be seeking its 12th Moir title. Coach Lakai Brice has standouts in junior Bryanna Troutman, sophomore Anayia Fulson and senior Maria Capito. Depth is the biggest issue for the Hornets. They have to keep their big three out of foul trouble.

Carson, tourney runner-up the last two seasons, is the No. 2 seed at 9-1, having lost only to 4A Hickory Ridge. Carson is still led by senior Olivia Gabriel and junior McKenzie Gadson. The Cougars are as deep as they’ve ever been and will be trying to give coach Brooke Stouder her first Moir championship as a coach. She won one as an East Rowan player in 1998.

West Rowan (8-1) is the No. 3 seed. Sophomore post player Abigail Wilson is scoring a ton and has emerged as one of the county’s best.

Fourth-seeded South Rowan (6-3) enters the tournament with a five-game winning streak. Junior Janiya Downs, a 5-foot-11 guard, is the reigning Rowan County Player of the Year, and has posted a quadruple-double this season. Guard  Tazah Hardin causes as much defensive disruption as any player in the county.

History is against South. The Raiders haven’t been champions since the girls tournament was played at Thanksgiving in 1992.

No. 5 North Rowan, No. 6 North Stanly, No.7 East Rowan and No. 8 Davie will be looking to stun the world in the first round.

The tournament, at Catawba College’s Goodman Gym, begins next Thursday and goes through Saturday, Dec. 30. Admission will be $8 per day or tournament passes can be purchased for $20.