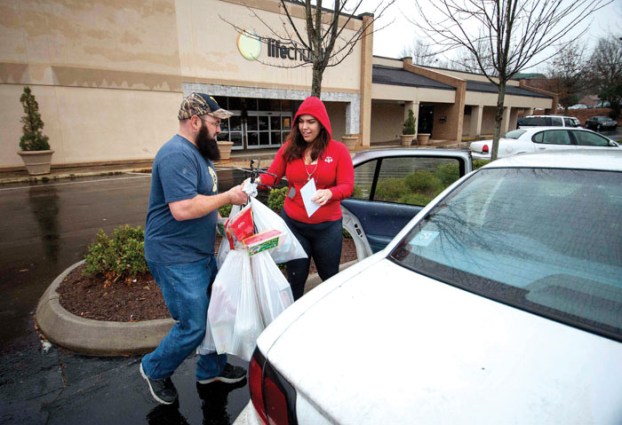 SALISBURY — Shania Lugo has been caring for her niece Aniyah since the 4-year-old was just 8 months old. This Christmas, Lugo faced the prospect of explaining to the little girl that there would not be any presents for her.

Instead, the Salisbury native loaded her car Wednesday morning with a bag filled with gifts from the Salvation Army’s Angel Tree program. Lugo is raising her niece by herself.

The Salvation Army, which facilitated the collection of the Angel Tree program and the Christmas Happiness Fund, was able to help more than 1,000 children. Families picked up gift cards and toys, as well as food from the Food Lion Feeds program. The distribution site has been at Life Church for a number of years.

It’s been a hard year for Lugo, who lost her mother, Glenda, last July followed by her grandfather five months later and then a cousin not long after. She said after those deaths, the family unit just kind of divided, literally.

“Their deaths split the family,” she said.

Lugo said her relatives went their separate ways. Her mother was the glue that kept her siblings together. Her sister was homeless at one point and left Salisbury to move in with another sister.

Lugo said although she works as a waitress, she is struggling to make ends meet and likely would not have been able to pay for Christmas presents. She said there’s so many other wait staff at the restaurant that there aren’t many hours to go around.

She’s grateful for the gifts she received through the Angel Tree program.

She said it’s great that there are caring people in the community because “without this, she probably wouldn’t have gotten anything.”

“I just want to say thank you to the community. It’s greatly appreciated,” Lugo said.

“It’s always an honor for us to be a part of the Christmas distribution,” said Life Church Pastor Chris Shelton. “The distribution is one of the ways we can join others for taking responsibility to help the community.”

Gabriel Adams is a single mother who isn’t working after giving birth just three months ago to her son, Ezekiel. She’s also taking care of her two other children, Natalia, 12, and Reuben, 8.

Maria Ortiz of Rockwell works at Quality Inn but struggles to make enough to buy Christmas gifts for her 10-month-old son, Mauricio.

She said she wouldn’t have been able to get her son gifts without help.

“I appreciate them doing this. It helps a lot,” she said.

“We find it a privilege to serve with the Salvation Army in this way,” Stutler said.

Mason also said he was happy to serve.

When Tara Updike first moved to Salisbury, she and her two daughters, Ariana Ratkowski, 7, and Raelynn Williams, 3, were homeless and lived in a shelter.

The single mother now lives in Zion Hills and works part time. She was struggling financially, so trying to buy Christmas wasn’t possible.

SALISBURY — When Santa Claus sauntered into a classroom at Hurley Elementary on Wednesday, he was met by excited cheers... read more