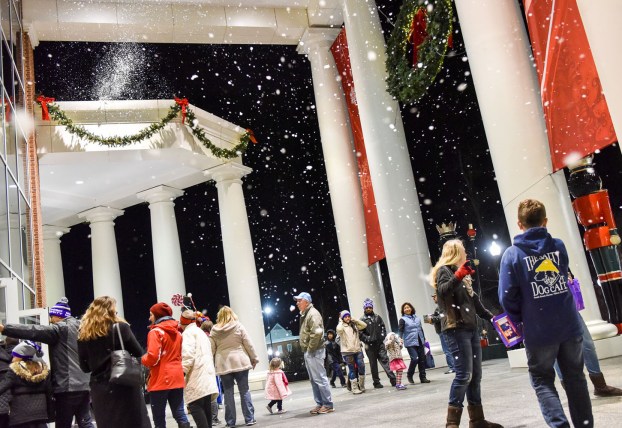 Families journey through campus beneath tunnels of lights and falling snow on one of four Polar Express trains. Submitted post

HIGH POINT — Four-year-old Payton Aust and her sister, 3-year-old Taylor, piled into a train car aboard the Polar Express and traveled through tunnels of lights and falling snow at High Point University. As their journey came to a stop, Payton looked to her parents, Brad and Robin Aust, with a smile on her face. She was ready for her next Community Christmas adventure.

“We’ve come every year for the last five years,” said High Point resident Robin Aust. “It’s become a tradition for us, and the kids really do love it. It’s a family-friendly event that people of all ages can come and enjoy, and I think on a larger scale that it’s a great morale booster for the community.”

Free and open to the public, the university’s Community Christmas celebration has grown in popularity in the Piedmont Triad.

“We’ve watched as the event has grown and transformed, and it never fails to impress,” said Brad Aust. “HPU has and continues to do a lot both within the university and for the surrounding community. The school’s growth isn’t exclusive, and giving back shows the true generosity of the university.”

High Point University welcomed about 12,000 people to campus on this first night.

Neighbors in High Point and friends from across the Triad were shuttled to campus from Oak Hollow Mall for the celebration. They were greeted at the university’s campus by a life-size Nativity scene with a photo station, Polar Express train rides, Santa’s Stable petting zoo, a Crafty Elf Lego Workshop and more.

The university continued its tradition of celebrating Christmas with the community by inviting residents to partake in communion, a new addition to this year’s festivities. Guests also enjoyed community choirs, falling snow, hot cocoa, and elves on stilts, and they made their way to visit Santa Claus in the Slane Student Center, where each child received a gift and photo.

For many in the Triad, the celebration has become a way for families to embrace the Christmas spirit while they stroll through campus and enjoy the sights and sounds of the season.

Celeste Blockem and her son, Jordan Davis, had their photo taken with Santa, and she watched as he received an Hight Point University hat from one of Santa’s elves.

“This event is so great every year,” said Blockem. “We’ve come several times and there’s always something new. It makes it exciting for us each time, and I’m always amazed at how generous and giving the university is.”

Seven-year-old Bryanna Pratt of High Point explored the Crafty Elf Lego Workshop in Wanek Center, overwhelmed with all the activities on campus.

“I’ve done too much stuff to even start naming it,” Pratt said. “But I can try. I got hot chocolate, colored a picture of Lego Santa, ate a hot dog, listened to bands play music and now I’m going to see Santa. Someone said there were elves with Santa too. Can I really see an elf? I’m excited for Santa, but I really want to see an elf.”

Many government offices and services and some businesses will take a break for the Christmas and New Year’s holidays. Salisbury... read more