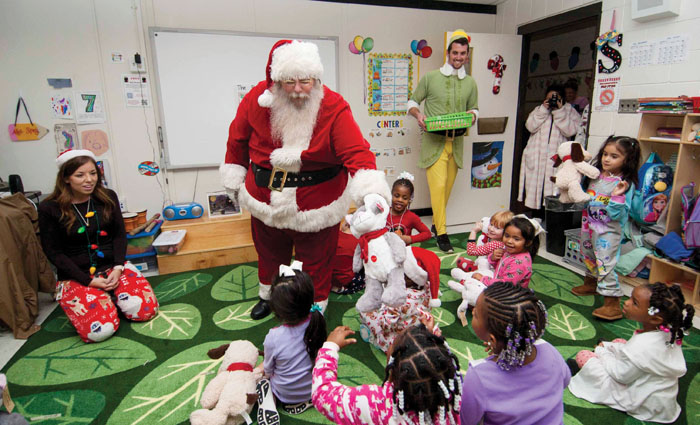 Santa Claus and Buddy the Elf visited Savannah Spry and Kristie Scoggins' prekindergarten class at Hurley Elementary School on Wednesday on the last day of classes before the 2017 Christmas break giving out stuffed animals and small candy canes to the excitement of the students. School custodian Nelson Roig dress as Santa and principal Ryan Disseler was Buddy the Elf. Jon E. Lakey/Salisbury Post

SALISBURY — When Santa Claus sauntered into a classroom at Hurley Elementary on Wednesday, he was met by excited cheers and the furious jingling of bells.

One rattled the bell she had been given and called out, “Santa, we believe in you!”

That morning, students trucked into school wearing pajamas and spent the day learning about Christmas, enjoying snacks and snuggling in to watch “The Polar Express” with a cup of hot cocoa. And just after lunch, they got a visit and a gift from Santa.

The celebration was the bow that neatly topped the compassion and caring Hurley staff members feel for their students, and it represented the end of an ambitious season of Christmas giving.

Principal Ryan Disseler said the idea began with a plan for a food drive to benefit the West Rowan community. Schools in the area had discussed doing it as a joint effort, but Hurley took the leap.

Its own food drive, Disseler determined, would benefit Hurley students who receive weekly backpacks from Food for Thought. Taken home each Friday, the bags contain enough food for one child for one weekend. But the backpack program has its limits.

“These same kids do not get any food over Christmas break,” Disseler said.

For many students, the backpack is the only source of food they’ll have all weekend. Over a longer holiday like Christmas, they may not eat at all.

“I thought, ‘If we could get just something for our kids, that would be awesome,’” Disseler said.

So Disseler and Taylor Downs, the Communities in Schools student support specialist for Hurley, decided to turn a parent-student breakfast into a Christmas food drive extravaganza.

School custodian Nelson Roig dressed up as Santa and spent a morning posing for pictures with students. The cost of a professional photo and a 4-by-6 print? Two cans of food or a “nominal” monetary donation.

The response blew them out of the water.

“I had no idea what to expect,” Downs said.

Parents lined up down the long halls of Hurley, and soon the small box set up to hold donated goods was overflowing.

“We had so much we had to line it up along the sides,” Disseler said.

By the end of the day, the school had collected more than 500 nonperishable food items and more than $150 in cash — enough to feed the 38 students involved in the backpack program for a good chunk of the two-week break.

“It was a huge thing for us,” Disseler said. “Because it means that every kid on that Food for Thought program will get right at 15 or 20 items each for the whole of Christmas break.”

On Monday and Tuesday, Disseler, Downs and guidance counselor Janelya Lewis Baker sorted the items into meals and packed them into 38 bags. Each family will also receive a Christmas ham, purchased with the money that was raised. The goods were sent home with students Wednesday for the Christmas holiday.

“It’s awesome to me; it’s unreal how much we were able to raise as a community,” Disseler said.

But that wasn’t the end of Hurley’s Christmas giving. On Wednesday, Roig — who also plays Santa at the N.C. Transportation Museum’s “Polar Express” production — donned his suit again and went classroom to classroom handing out stuffed animals. Disseler, dressed as Buddy the Elf, joined him, giving a candy cane to each student.

The gifts were donated by Toys for Tots, thanks to Hurley cafeteria worker Lynn Maurer. According to Disseler, the organization donated enough stuffed animals for each child at Hurley to receive one.

Wednesday afternoon, students cuddled their new toys closely or held them as they twirled around the room. They ran up to Roig with hugs, words of thanks or pictures that they had drawn of Santa.

For Disseler and other staff members at Hurley, it’s a season of giving they hope to make a school tradition.

“This is definitely something we want to keep going,” he said.