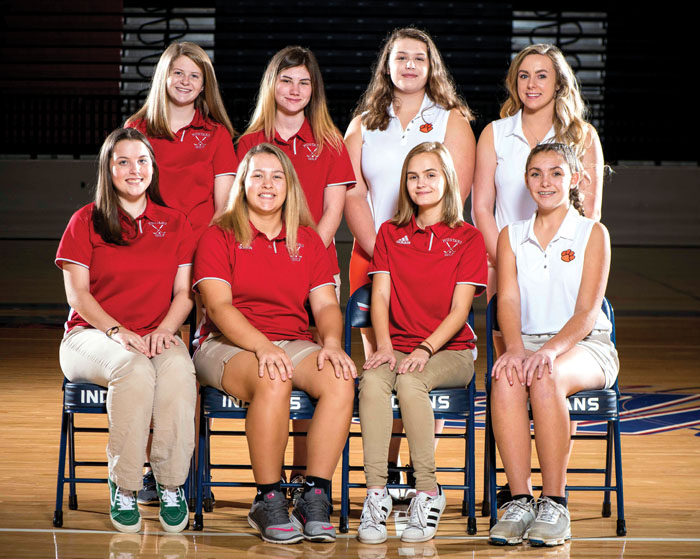 SALISBURY — Talk about your sudden arrivals.

In just 16 months, East Rowan’s Carmen Fraley went from not even owning golf clubs to becoming Rowan County’s Girls’ Golfer of the Year.

Sure, the county’s golf talent level may have dropped a bit with the graduations of the likes of Isabella Rusher, Alexandria Bare, Grace Yatawara and Micah Furr, but there is still a tournament and still a medalist.

That brings us back to Fraley, a junior, who had tried golf in the sixth grade but after a short time, gave it up, her parents even selling the clubs.

But after years of travel-team softball and playing basketball, Fraley decided in 2016 to “try something new.” Carmen’s father, Bill, bought her some new clubs and she dove into the sport headfirst.

“We got the new clubs in June and I started going to the driving range, and eventually, starting playing some rounds,” remembers Carmen. “I became obsessed with golf, practicing almost every day and watching the Golf Channel when I wasn’t practicing.”

As a sophomore in 2016, Carmen made Coach Rhett Teems’ squad at East Rowan, and just four months after her dad bought the new clubs, she was in the county tournament at the Country Club of Salisbury. She had an 18-hole score of 99, finishing second overall to champion Furr of Carson.

Finishing second in her first season of competitive golf set the stage for this year’s success. She was also the North Piedmont Conference’s Player of the Year.

“When I finished second in the county tournament last year, it instantly set my goal: Be the best this season,” she said.

Fraley accomplished that goal on Oct. 3 at McCanless Golf Club, when she led the field with a nine-hole 41. Along with teammates Grace Howell (43), Camryn Corriher (46), Haley Fesperman (49) and Megan Graham 47, the Mustangs won the team championship as well.

Fraley had a nine-hole average of 44 this fall and was medalist in three of East’s North Piedmont Conference matches. “She’s got length,” Teems said after the county tournament. “She’s all power. But she has been working really hard on her short game and putting.”

Fraley admits that she has been surprised at her quick success, even though she continues to work hard at her craft.

“Yes, I wasn’t expecting to be where I am because in the first match, I wasn’t even sure what I was doing,” she said with a chuckle. “I scored in the high 50s, I think a 58 for nine holes, so it wasn’t exactly a great start. But if you keep practicing, you do get better. And in golf, you’re on your own when you’re playing, so it’s up to you to get better.”

Fraley credits Teems and Warrior Golf Club pro Brian Lee for most of her improvement, along with former Corbin Hills pro Jay Hill and Mike Apone at The Golf Mart in Salisbury. And in addition to her dad, Carmen’s had the support of her mom, Kim, and older sister, Candace.

Carmen’s background had always been softball, playing as a little girl at East Rowan Diamond Sports and Rowan Little League, and then with Adrian Gantt’s Extreme Performance travel team. She was on East Rowan’s jayvee team last spring.

She was also on the Mustangs’ track and field squad as a sophomore, the second shot putter, behind Iyahnna Neal. Carmen finished sixth at the South Piedmont Conference meet with a throw of 28 feet, 9 inches.

Currently, Fraley is playing varsity basketball for East, and hopes again be a two-sport athlete in the spring, in softball and track. And all the while, not letting golf get too far out of mind.

“I have put golf in the back corner since the state tournament, just so I can concentrate on basketball,” said Fraley. “That’s only being fair to my coach (Kevin Holland) and teammates. The second weekend in January is my target date to get back out to golf. I’m trying to avoid some of the cold weather, anyway.”

Fraley believes that golf is her best option for playing athletics in college, but knows that this summer and her senior season next fall will be key in getting an opportunity.

“I’m hoping to get a golf scholarship, but I know I still have a lot of work to do to get better,” said Fraley, who added that her ideal destinations at this point are Catawba, UNC Greensboro and Lees-McRae, but she would obviously “be open” to whoever recruits me.”