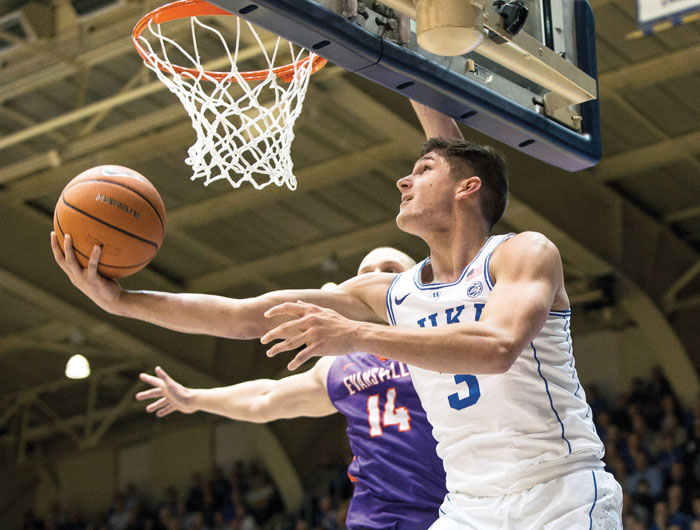 Duke's Grayson Allen (3) jumps for a layup as Evansville's Dainius Chatkevicius (14) defends during the first half of an NCAA college basketball game in Durham, N.C., Wednesday, Dec. 20, 2017. (AP Photo/Ben McKeown)

DURHAM (AP) — Fourth-ranked Duke had 11 days to dwell on the loss that cost the Blue Devils their No. 1 ranking — and more importantly, 11 days to finally spend some quality time on the practice court.

They wasted no time taking out their frustrations on Evansville.

Duke routed the Purple Aces 104-40 on Wednesday night behind a season-best 27 points from freshman Wendell Carter Jr. — who said the team practiced every day during the break.

Practice time was scarce before that, with the Blue Devils playing 12 games and criss-crossing the country from Nov. 10-Dec. 9.

Marvin Bagley III added 18 points and Grayson Allen finished with 16 to help the Blue Devils (12-1) bounce back from their lone loss with one of their best defensive performances of the season.

Duke blocked nine shots, forced a season-best 21 turnovers and turned them into 39 points against a slow-paced Evansville team.

Dainius Chatkevicius had 12 points to lead the Purple Aces (10-3), who had their five-game winning streak snapped. Evansville entered allowing an average of 61.9 points per game. The Blue Devils nearly had that at halftime, leading 58-18 the break.

Evansville: The Purple Aces like to play slowly — frequently milking the shot clock into the low teens or longer before taking their first shot or, more often, stumbling into a turnover — and that deliberate style worked against them as the Blue Devils methodically stretched their lead into the 20s and well beyond.

Duke: The Blue Devils had 11 days to stew on the loss that knocked them from No. 1. Duke allowed the Eagles to hit 15 3-pointers in that game, but clamped down against an Evansville team that makes 49.4 percent of its 3s — the best in Division I. Evansville was just 5 of 14 from long range.

Not that he was needed in the slightest, but the Blue Devils played without injured sophomore forward Javin DeLaurier, after coach Mike Krzyzewski said he had a tight hamstring. Big man Marques Bolden and freshman guards Alex O’Connell and Jordan Goldwire were the first players off the bench for the Blue Devils.

Don’t sleep on Carter’s long-range touch. The freshman big man entered with three 3-pointers all season and surpassed that in this one, hitting 4 of 7 from long range. That was a big part of the season-best nine field goals he hit. “We kind of rolled the dice,” Simmons said, “and he made us pay.”

Duke: The Blue Devils have another extended break, this one lasting nine days before Florida State comes in Dec. 30 for their first home ACC game.