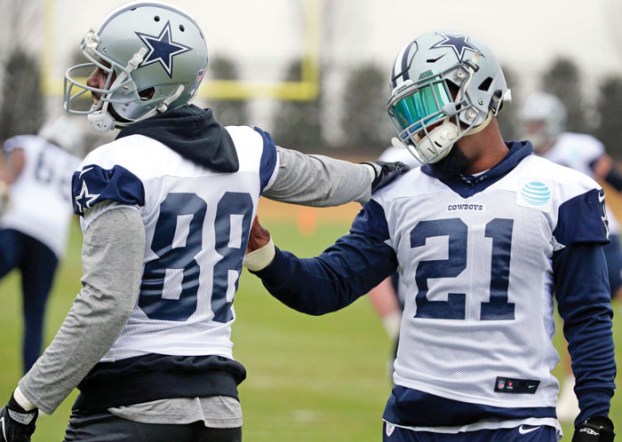 Elliott wasn’t interested in sharing that side of himself, or much of anything else in a 70-second session with reporters that last year’s NFL rushing leader abruptly ended because he didn’t want questions about his time away from the team.

“All right, I’m done,” Elliott said after the fifth such question — why he didn’t want to talk about what he did in Cabo San Lucas, Mexico, where he spent almost all of the six-game suspension over domestic violence allegations.

Elliott fought Commissioner Roger Goodell’s decision for two months in federal courts in three states. His legal team won injunctions and other rulings that kept him on the field for eight games before abandoning the case when an appeals court in New York denied an injunction.

Soon after announcing that he was ending the appeal, Elliott went to Mexico. There were photos of him running on a beach, and apparently a planned documentary that has yet to be released. Elliott didn’t want to talk about that either.

Elliott’s agents said six weeks ago that the former Ohio State star would release a “personal statement” before his return, but it never happened.

The closest thing was his only answer of substance Wednesday, when Elliott responded to a question about what he learned by saying he didn’t walk to talk about the episode and then thanking the Cowboys, his family and the fans.

“Especially the Cowboys fans who stuck by me through this tough time and have a little faith in me,” Elliott said. “I’m not going to talk about it anymore. This is the last time you’re going to hear me speak about it. So please don’t even ask me about it.”

The Cowboys went 3-3 without Elliott, losing the first three before the current three-game winning streak that has kept them alive in the NFC wild-card race. Dallas must win its final two games, starting Sunday at home against Seattle, and get help from several teams.

Elliott ran with the first team in his first practice Wednesday, and a Dallas offense that sputtered even while winning games when he was gone figures to be more efficient with the versatile runner, pass-catcher and blitz blocker.

“It just makes our offense that much better, that much more powerful,” said quarterback Dak Prescott, the NFL Offensive Rookie of the Year last season with fellow first-star Elliott as his backfield mate.

“It’s hard to scheme and play us. You can load the box if you want, the way we’ve been going in the passing game, we’ll beat you that way. If you want to lighten the box up and let him go, we’ll do that too.”

Since he was first emerging as a star, Elliott’s teammates say they’ve fed off what they see as his fun-loving nature. He’s shown it for the cameras a few times as well, most notably when he jumped into a large Salvation Army red kettle after a touchdown on Thanksgiving last year.

Elliott was suspended for the Thanksgiving game this year.

“He helps us out a lot doing that, being able to come in here, run around with his …,” said defensive end DeMarcus Lawrence, deciding he wasn’t quite ready to share this particular Elliott anecdote. “He’s crazy. It’s fun just to have a guy like that in the locker room.”

Once they lost three straight games without him, the Cowboys figured they would need to win all five remaining games to make the playoffs a year after Prescott and Elliott led them to an NFC-best 13 wins.

Now they know they have to win the last two, while getting a rare late-season boost with the return of one of their best players.

“He gets guys juiced up,” receiver Dez Bryant said. “We are excited to have him back and get to rolling.”