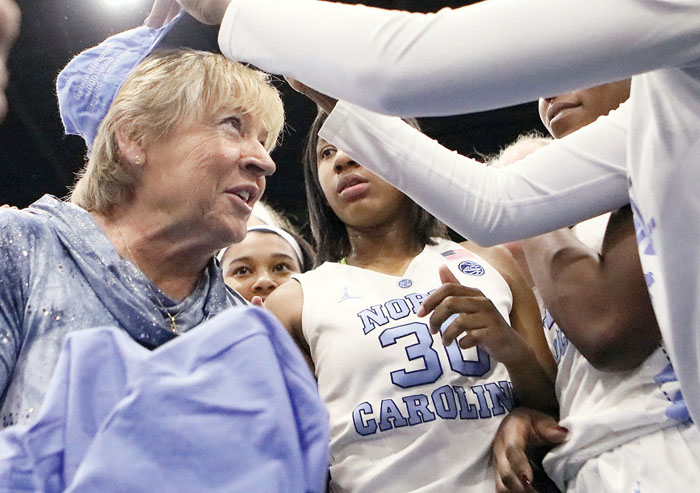 North Carolina coach Sylvia Hatchell is greeted by her players after their 79-63 win over Grambling State in an NCAA college basketball game in the Crescom Bank Holiday Invitational Tuesday, Dec. 19, 2017, Myrtle Beach Convention Center in Myrtle Beach. S.C. Hatchell, who battled leukemia and was declared cancer-free in 2014, earned her 1,00th career coaching victory with the win. (Janet Blackmon Morgan/The Sun News via AP)

MYRTLE BEACH, S.C. (AP) — The numbers are hard for even Sylvia Hatchell to take in.

She has become the third women’s Division I coach to net her 1,000th career victory.

Hatchell reached the milestone Tuesday after her North Carolina Tar Heels beat Grambling State 79-63. She is 1,000-376 during a 43-year career that started with 11 seasons at Francis Marion.

“As far as the 1,000 wins, gosh, I just can’t believe I’ve coached that many games,” said Hatchell, who has battled leukemia and was declared cancer-free in 2014.

This is her 32nd season at North Carolina, and she has led the Tar Heels to eight ACC titles, three Final Fours and the 1994 national championship.

Jamie Cherry scored 22 points and Janelle Bailey added 15 for the Tar Heels (10-2), who shot 47 percent and outscored the Tigers 60-40 over the final three quarters after falling behind early.

Hatchell is 728-286 with the Tar Heels, and another milestone could come later this season. She’s 11 wins shy of former Virginia coach Debbie Ryan’s record for most victories at an Atlantic Coast Conference women’s program.

“The fact that I still get nervous and get the jitters, but it’s the good jitters before all the games. Whenever I lose that, that will be time to let somebody else do it,” Hatchell said. “But I’ve got it now just as much as ever. And what I’ve gone through the last few years has absolutely renewed my passion for the game and for winning, especially at UNC.”

Hatchell is the only coach to win national titles at the AIAW, NAIA and NCAA levels, capturing the first two of those at Francis Marion in 1982 and 1986.

Sitting by Auriemma’s side for the 1,000 wins has been associate head coach Chris Dailey. She’s been with Auriemma since he took over at UConn in 1985. Dailey led the Huskies to seven of those victories while filling in as head coach. Auriemma was suspended for four games in 1989 for playing an extra game that season. That year, the Huskies won their first Big East tournament title with Dailey at the helm.

She also coached three games when Auriemma’s father died in 1997. All seven of those wins are credited to Auriemma.

As the final buzzer sounded, the Huskies dumped Gatorade buckets full of confetti on Auriemma and Dailey.

Players from Auriemma’s first team in 1985 that beat Iona for win No. 1 were in attendance and introduced to the sellout crowd. Fans held up signs they were given that said “GEN1000 career wins.”

Auriemma was presented with his Hall of Fame jacket and a cake from the Mohegan Sun where the game was played. A video was played that included tributes from former players like Breanna Stewart, who won 151 games at UConn — second most of all time.

“Wow coach, 1000 wins!!!! You have created and are continuing to create an untouchable legacy in the world of sports, let alone basketball,” Stewart told The Associated Press in a text. “We set the bar high at UConn and you have continued to do that. I’m so happy to say that I am a part of your 1,000 wins!”

UConn (9-0) led 48-33 at the break before Oklahoma cut its deficit to seven midway through the third quarter, shocking the crowd. The Huskies responded with a 13-3 run to close the period that was capped by a steal off an inbounds play for a layup by Katie Lou Samuelson to give UConn a 64-47 advantage headed into the fourth quarter. Napheesa Collier, who scored 21 points to lead the Huskies, had seven of them during the spurt.

The Huskies got a scare when Gabby Williams went down in the first quarter after picking up her second foul. The senior forward went to the locker room for a bit before coming back to the bench later in the period. She came back in before picking up a third foul early in the second quarter.

Oklahoma: This was the second time that the Sooners were facing a coach going for a 1,000th victory. Oklahoma beat Tennessee in Pat Summitt’s first attempt at 1,000.

UConn: The Huskies have never lost to Oklahoma in 11 meetings. The two teams hadn’t played since 2012 until Tuesday night. … Auriemma has gone 246-62 (.798) against ranked teams in his career. … UConn freshman Megan Walker missed the game with the flu.

UConn: Heads to Toronto to play Duquesne in a homecoming game for Canadian Kia Nurse on Friday.