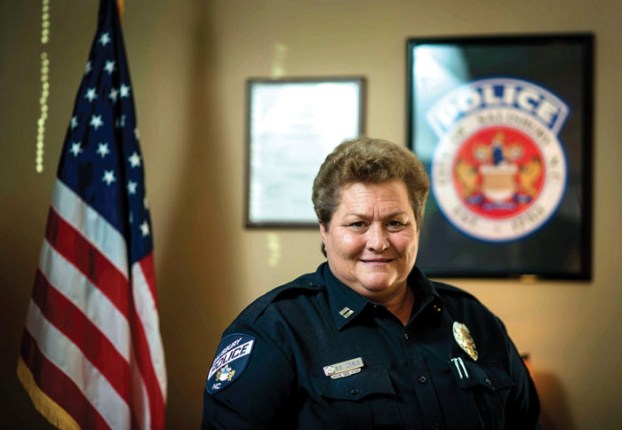 Salisbury Police Department's Shelia Lingle will retire after about 30 years of service to the city of Salisbury. Jon C. Lakey/Salisbury Post

On Thursday, Capt. Shelia Lingle will end a nearly 30-year career with the Salisbury Police Department with her retirement. Her last day will culminate with a long-held police-sponsored bicycle giveaway program.

Lingle will have worked for 29 years with the same department. Once her sick leave kicks in, she’ll have spent 30 years doing what she always envisioned herself doing.

Lingle received her criminal justice degree from Rowan-Cabarrus Community College, then Rowan Technical College, and went on to receive a degree from Pfeiffer University.

She said her family was skeptical of her dream of becoming a law enforcement officer because of the potential dangers.

Lingle spent the first three years of her career as a patrol officer. She then became a master police officer, then a detective in 1992 and later a lieutenant, both of which were her goals.

Lingle then worked as a sexual assault and child abuse investigator.

After she got married to her husband, Todd, and the two began a family, investigating child abuse cases began to take its toll. Lingle moved to investigating property crimes such as breaking and entering and robbery.

Lingle then was promoted to sergeant over the night patrol for two years. She worked as a narcotics sergeant for one year, then became a lieutenant on patrol. She later presided over the Criminal Investigations Division and later was promoted to captain.

When Lingle became a captain, she took on a number of duties including overseeing the Criminal Investigations Division, records clerks, evidence, parking, crime scene and school resource officers. Lingle was one of the Police Department’s first female captains. Melonie Thompson was the other.

She will retire as a captain over the Criminal Investigations Division.

The best part of her job in law enforcement, Lingle said, is solving a case that provides closure for the families involved.

“The best part is the helping part, knowing someone has been violated and you may be able to get them closure or get their stuff back,” she said.

Lingle, who has always liked a challenge, said being faced with a problem and being able to solve it is also a great part of her job.

She said helping others is one of the reasons she loves her job, but the trade-off is time away from family.

The worst part of her job, she said, is working hard on a case and not being able to provide a resolution for a family.

When Police Chief Jerry Stokes arrived last year, he said he leaned upon Lingle’s knowledge of the department as he took on his new role.

“Having that perspective was vitally important to figure out what our challenges and strengths,” Stokes said.

He said the vast majority of her career was in investigations and “her understanding what we needed was extremely important.”

Lt. Greg Beam, who supervises the Criminal Investigations Division, said his family and Lingle’s family have been friends for years, so he has known her outside law enforcement much of his life.

He echoed Stokes’ statement and said Lingle will be missed.

“Her knowledge of her job — she’s very detail-oriented. She keeps everybody on her toes. I’m going to miss her as a friend, seeing and talking to her every day,” Beam said.

Capt. Melonie Thompson, who joined the Police Department in 1993, has learned to depend on Lingle. Both women were promoted to captain at the same time in 2011.

“I think that she’s always done well in investigations. Her biggest contribution for many years was when she was over child crimes, which is very hard for anyone. She was an expert in that area. She’s always been a good resource for us,” Thompson said.

Thompson said with a laugh that she’ll miss pranking Lingle and picking on her. But she’ll also miss having Lingle as a resource.

Lingle will have more time with family, travel a bit and get right back into the workforce as a softball coach at North Rowan High School, her alma mater. She’ll start in January when students return from the Christmas holiday.

Lingle played not only softball in high school but also tennis and basketball. Over the years, she has coached recreation softball and middle school softball. She will also play a civilian role at the Police Department by performing background checks for new hires.

Coaching was always something she thought of for retirement. She plans to get certified to become a substitute teacher.

“It’s something fun,” she said.

She’ll also have more time to watch her daughter at her college lacrosse games as well as spend more time with her parents.

Lingle hopes the legacy she leaves behind is one that shows she worked hard and was dedicated to the department and that she paved the way for other women officers to one day make being promoted to captain one of their goals just as other female officers paved the way for her.

Lingle said like other women who work in a male-dominated environment, she feels as if there was something to prove early on. Once she was able to show she could handle herself, she said, there was no question what caliber of officer she would be.

“I’ve had a very good career. I’ve worked with some very good and dedicated officers with this department,” she said.

SALISBURY — Crystal Miller had never danced before she started coming to the biweekly meetings of the Dancing Queens and... read more