D.G. Martin: Shake off those visions of bitcoins 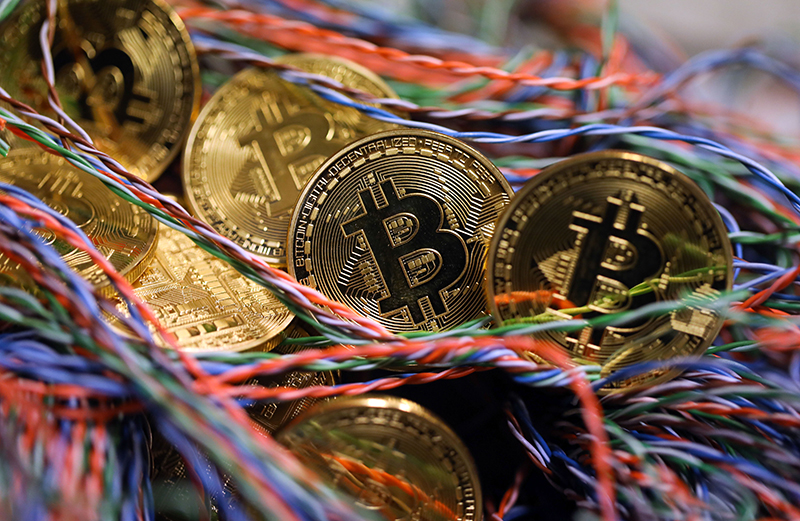 Bitcoin lives on the internet, not as physical currency, but that hasn't stopped traders from driving up the cryptocurrency's value. Bloomberg photo by Chris Ratcliffe.

Are you hoping that someone will give you a bitcoin for Christmas this year?

Or do you think it might be a perfect gift for you to give to someone else?

It is, you think, a gift that, because its price is rising every day, would be something that would keep on giving, day after day.

Back when I was growing up, there was another miracle gift. It was growing in value each day, seeming to be the perfect gift to go up in price and make everybody rich.

Back then it was chinchillas.

Both bitcoins and chinchillas seem to be the perfect way for people to get rich overnight. You buy something for a high price, but because the price keeps going up, you keep getting richer and richer.

Or that is the way it seems.

Back then, when the price of chinchillas was rising, lots of people who knew nothing about the furry little animals wanted to buy a pair of them to breed and then get rich selling the babies in the ever rising market.

For a while the supply was limited and the price continued to rise. But when lots of little chinchillas were born and put on the market, the supply adjusted. The market price collapsed and the demand evaporated.

Today you can buy a pair of chinchillas at some pet stores for almost nothing.

So, are bitcoins the new chinchillas and will their price collapse in the same way?

Baxter admires the design of the bitcoin process, which provides an efficient way for commercial payments to be made without middlemen such as banks or any governmental regulation or oversight. He told me how each bitcoin is uniquely created or mined by using computers to solve incredibly difficult, complicated puzzles. The resulting bitcoin is a series of numbers and programs that define it uniquely and also provide a private and self-contained record of every transfer.

But despite Baxter’s admiration for the bitcoin, he warns that its fast rising price cannot be sustained.

The headline to his Dec. 11 article in the Wall Street Journal is a good summary of his position:

First, “It is too volatile to be a reliable store of value.” And there is no assurance of the kind of trust that undergirds other forms of currency. Hackers who have breached bitcoin repositories are undermining whatever trust it had.

Second, the use of enormous amounts of electricity in the creation of bitcoins is essentially wasteful. “When environmentalists begin to understand this, there will be a firestorm.”

Thirdly, because bitcoin is being used for criminal transactions and avoidance of government restrictions on the movement of capital, governments will “crack down.” Venezuela and China already have.

Fourthly, and most important, says Baxter, “Bitcoin is on a collision course with sovereign states. Bitcoin was founded on a libertarian ethos, and its proponents zealously resist licensing and regulation.”

When governments make a serious move to regulate it, Baxter says, “bitcoin’s price will crash to zero. Panicked owners will rush to exit and the bubble will burst.

“Nothing will be able to save them. Speculators will depart for the next lunacy, leaving behind the greater fools to wonder where their supposed wealth went and demand that government do something about it.”

Thanks to Professor Baxter, I am convinced that a pair of chinchillas would be better than bitcoins for a Christmas present or an investment.

D.G. Martin hosts “North Carolina Bookwatch,” which airs Sundays at noon and Thursdays at 5 p.m. on UNC-TV. Today’s guest is John Bemis, author of “Out of Abaton: The Wooden Prince.”