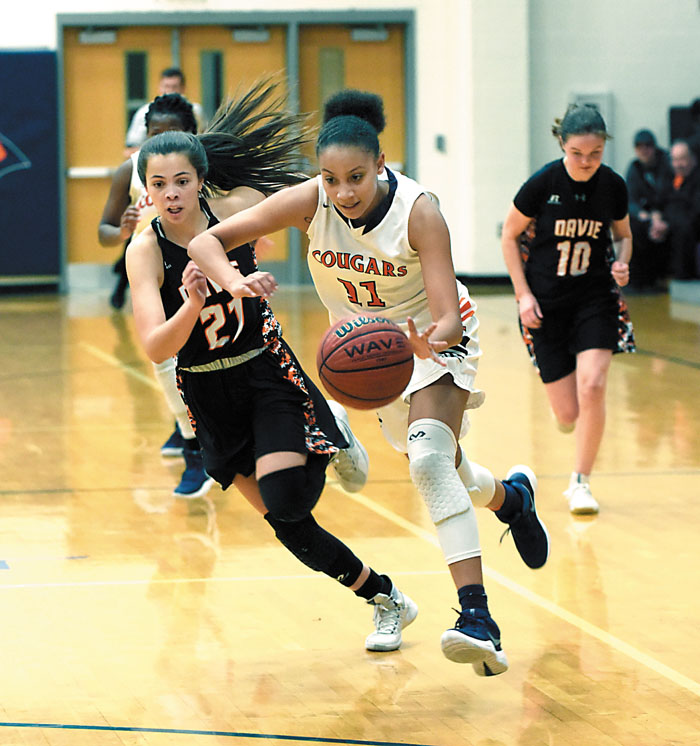 She didn’t want to hear it after the Cougars barely broke par in Tuesday’s 56-41 victory against visiting Davie County.

“Not much,” Stouder quickly answered, when asked what she liked about Carson’s less-than-spectacular performance. “This was very much a half-hearted effort. Our defensive effort was pretty much non-existent tonight. We didn’t stay in stance. We didn’t talk. And in the first half we didn’t close down on shooters, didn’t box out and didn’t rebound very well.”

Despite the unflattering report card, the Cougars improved to 9-1 and will draw a high seed in next week’s holiday tournament.

“That’s absolutely a good thing,” Stouder said. “But we expect more than this.”

Junior McKenzie Gadson led Carson with 18 points, including seven in the decisive second quarter. She’s averaging 15.3 points-per-game this season. Teammate Olivia Gabriel scored 11 of her 13 points in the first half.

Davie (2-6) suffered its third consecutive loss and fell to 0-5 on the road. The War Eagles received 15 points from sophomore Rylea Carter and 12 from senior Trinity Hayes.

“I think Davie played hard,” Stouder said. “They did not shut down or back down. It was just a real subpar effort on our part. We’re a lot better than we showed tonight.”

Following a tight first quarter, Carson outscored the guests 21-7 in the second and grabbed a 16-point halftime lead.

“We were pretty active in our press,” explained Stouder. “And we were real physical and got out and ran in transition. We got in the right spots and got some easy baskets.”