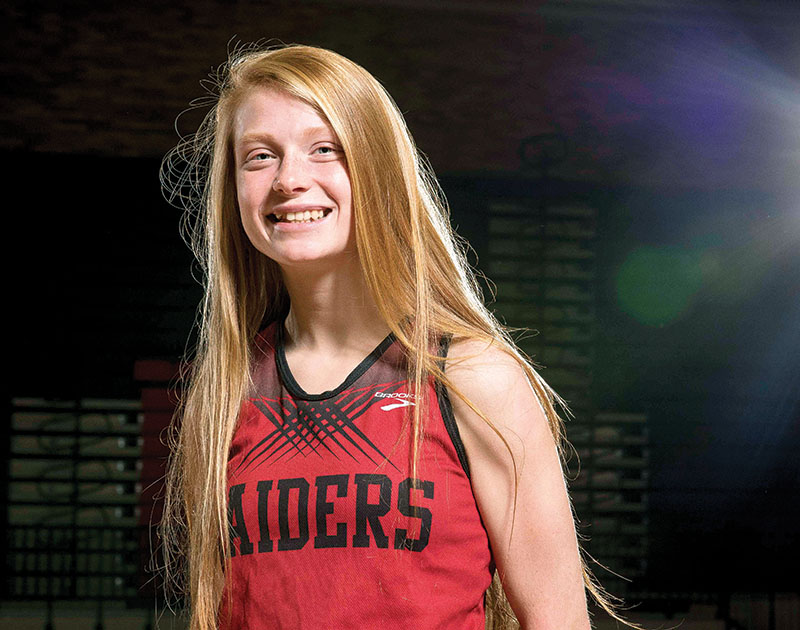 SALISBURY — As a sophomore, South Rowan’s Madison Lowery took the 12th spot — that’s the last one — on the all-county team.

If not for her distinctive red hair and perpetual grin, she would’ve been anonymous last fall. She was merely the second-best runner on the county’s third-best team. Her time in the 2016 Rowan County Championships at Dan Nicholas Park (22:45) was promising for a cross country rookie, but no one except South Rowan coach Robert Marchinko had any clue Lowery was on the road to being special.

“Madison just gets it,” Marchinko said. “She wants to be great, and she’s not afraid to do the work — on a daily basis — to make that happen.”

Lowery’s stunning junior season culminated with an All-State performance. She placed 10th in the 2A State Championships held on Nov. 4 in Kernersville.

That she ran a personal record on the largest stage proves Lowery has some toughness about her, mental toughness as well as physical. She’s immune to jitters.

That 19:33 on a tough course where she contended with taxing hills was more than 3 minutes faster than her quickest clocking last fall. That’s how far and how fast Lowery has surged. From the middle of the pack to the top dog in a matter of months.

“I’ve been doing this for 24 years,” Marchinko said. “I don’t think I’ve ever seen an athlete improve as much as she has in one year.”

Lowery likes to run. She also likes to win.

“Running is my outlet,” Lowery said. “Even if I’m having a bad day at school, when I get out there and run, it makes me strong.”

She keeps it simple. She likes to run from in front, start to finish. She doesn’t like to wear a watch.  She likes to be pleasantly surprised by her time.

In elite races, she’s not always out front, but she showed Marchinko a ton of competitive spirit in the state meet. Lowery was a distant 12th late in the race, with a lot of ground to make up, but her finishing kick over the last 800 meters carried her to 10th and that final spot on the All-State team.

“I was in the moment,” Lowery said. “I wasn’t really thinking about anything. I just wanted to pass people.”

Lowery’s super season finished with the state meet, but there was a lot of winning before that.

She made her first serious statement in the Rowan County Championships at Dan Nicholas Park in September. She ran 20:01 and won by 54 seconds.

She also won the Central Carolina Conference Championships at Salisbury Community Park in mid-October. That’s a challenging, elevated course, but she ran 20:23.

Next was the 2A Midwest Regional at Kernersville’s Ivey M. Redmon Complex. Lowery ran 20:08 and finished eighth. That qualified her to return to Kernersville to compete in the 2A State Championships as an individual. And the rest is history.

“Her positive attitude and mental toughness are her greatest attributes,” Marchinko said. “She is a joy to coach. I look forward to seeing how much faster she can get, and I’m going to enjoy watching her run in college.”

Lowery is currently competing in indoor track, establishing PRs with each meet. She’ll also compete again in outdoor track. She’ll be tough in the distance races. She helped South win the 4×800 last spring, while placing third in the 3200 and fourth in the 1600.

Lowery says there’s no danger of burnout from year-round races. She thrives on the thrill of getting faster every day.

“I want to stay active,” Lowery said. “This year was just a warmup for next year. State champion is my goal. That’s what I’m going for.”

The 2016 Rowan County Runner of the Year, Carson’s Taylor Wiggins, battled injuries. If her right knee had stayed healthy, Wiggins would have been one of the county’s best as a senior.

But she was unable to finish the Rowan County Championships (that meet determines the 12 all-county performers) and also was sidelined for the North Piedmont Conference meet. Wiggins was able to run 21:19 in the 3A Midwest Regional, so even at far less than 100 percent, she turned in one of the better times posted this year.

Carson’s Taylor Conrad was the county’s second-best runner, behind Lowery. The sophomore has been runner-up in the Rowan County Championships twice. She consistently runs in the 20s and placed second in the North Piedmont Conference Championships in 20:09. She was a state qualifier. Conrad also led Carson to the county team championship. Even with Wiggins down, the Cougars edged Salisbury and South at Dan Nicholas Park.

Salisbury had the distinction of qualifying its team for the 2A State Championships for the second straight season, an achievement that made Sallie Pittman the choice as the Post’s Coach of the Year. She got the nod over Marchinko, who developed Lowery and worked wonders with limited numbers, and Les-Lee Efird, who guided Carson to the county title.

Salisbury made it to the state event by edging South Rowan at the 2A Midwest Regional via the tiebreaker. Senior Mary Kauffman led the charge for the Hornets in the regional and then turned in a PR in her final race in the 2A State Championships.

Carson senior Jessie Nichols made all-county four straight seasons. She and Kaufmann are the only girls in the Class of 2018 to do so.

South sophomore Madison Henry was not only third in the Rowan Championships, she was runner-up in the CCC Championships.

Salisbury sophomore Leah Cressler is all-county for the second time. She took fourth in the CCC Championships and paced the Hornets in the 2A Championships.

Carson senior Olivia Gabriel took 2016 off to concentrate on basketball, but this is the third time she’s made all-county in cross country.

West was led by freshman Megyn Spicer. A state qualifier, she ran 21:31 in the 3A State Championships, meaning she shaved more than a minute off her September times.

Only three of the all-county 12 are seniors.