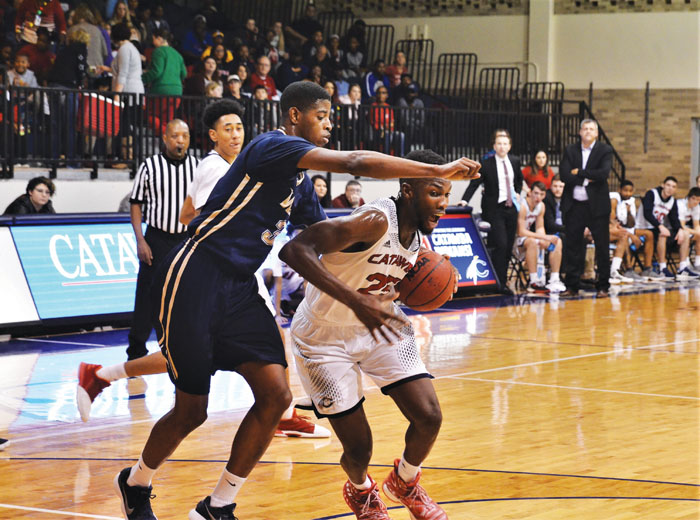 SALISBURY — Wingate coach Brian Good admitted that a lot of South Atlantic Conference men’s basketball games will come down to who’s the luckiest.

Catawba coach Rob Perron has no luck to speak of. Had All-SAC guard Jameel Taylor been able to compete in Tuesday’s Education Day matinee, the Indians may have had enough firepower to beat Wingate. We’ll never know. Taylor, who aggravated a high ankle sprain on Saturday, couldn’t go, and the Bulldogs left Goodman Gym with an 85-77 victory.

“It’s never that 16th guy who gets hurt,” Good said philosophically. “It’s always one of your best guys.”

Catawba has six players sidelined, with Larry Curry (ankle), Daquan Lilly (back) and Peyton Pappas (thumb) out for the season. Taylor, Henderson Lentz (hip) and  Tae Cannon (pneumonia) are likely to be in uniform  when the Indians return to action Jan. 10.

Catawba (3-7, 0-5) is last in the SAC in free-throw shooting, field-goal shooting and 3-point shooting, a trifecta of inaccuracy that leaves no margin for error. Catawba pummeled the Bulldogs (6-6, 4-1) on the backboards (19-7 on offensive boards), but it wasn’t enough. Catawba shot 43.7 percent —better than recent outings — but Wingate nailed 13 3-pointers and shot 52.7 percent.

“We have to do a better job of defending the 3-point line,” Perron said. “We were letting them catch the ball off screens with their feet set.”

With Taylor out and with standouts Jerrin Morrison and Malik Constantine combining for a meager six first-half points, Catawba was very fortunate to be down only 42-32 at halftime.

“We should have had a much bigger lead,” Good said. “But we were brutal rebounding the basketball. Catawba made one 3-pointer in the first half. Everything else they got was in the lane, and it’s not like we didn’t talk about that at halftime.”

Wingate shot the ball incredibly well in the early stages of the second half. Guard Kerigan Farley (21 points) was dunking and driving, and Marco Haskins (16 points) buried back-to-back 3-balls. Suddenly, the Bulldogs were up 19, 64-45,with 13 minutes left.

“It was that run they had at the start of the second half that killed us,” Morrison said. “The hole was deep. We fought back hard, but we couldn’t get all the way back.”

Catawba freshman Carter Phillips scored five quick points to spark the run that made things interesting. When Catawba guard Jordan Barber, able to play for the first time in weeks, made a free throw with 8:11 remaining, the Indians trailed 69-63. Catawba had a chance to pull within three but missed twice on 3-point tries.

“Our mojo got bad for several minutes and all those (Education Day) kids who were in here had finally started cheering for Catawba at the right times,” Good said. “Catawba got some energy.”

Wingate guard Zeriq Lolar (17 points) drained the key 3-pointer that stopped Catawba’s surge. Then Lolar made a slick pass to Devarious Christian for an easy two. The Bulldogs stabilized and finished off their victory.

Morrison tried to put it all on his back down the stretch for the Indians. He scored 17 in the second half for a team-leading 19.

“We’re having some growing pains, but you could see all those young guys getting better today,” Morrison said.

The good news for Catawba was the play of freshmen Phillips (seven points, four rebounds), John McRae (six rebounds, two 3-pointers) and 6-foot-7 D.J. Johnson (17 points on 8-for-11 shooting). All three played the best they’ve played. Morrison believes Johnson has the potential to be a SAC Player of the Year down the road.

“D.J. has been getting to the right spots the last few weeks, but today he was finishing,” Perron said. “It was fun watching those freshmen grow, but it still wasn’t any fun to lose. I thought we played hard enough to win. We just didn’t play smart enough to win.”