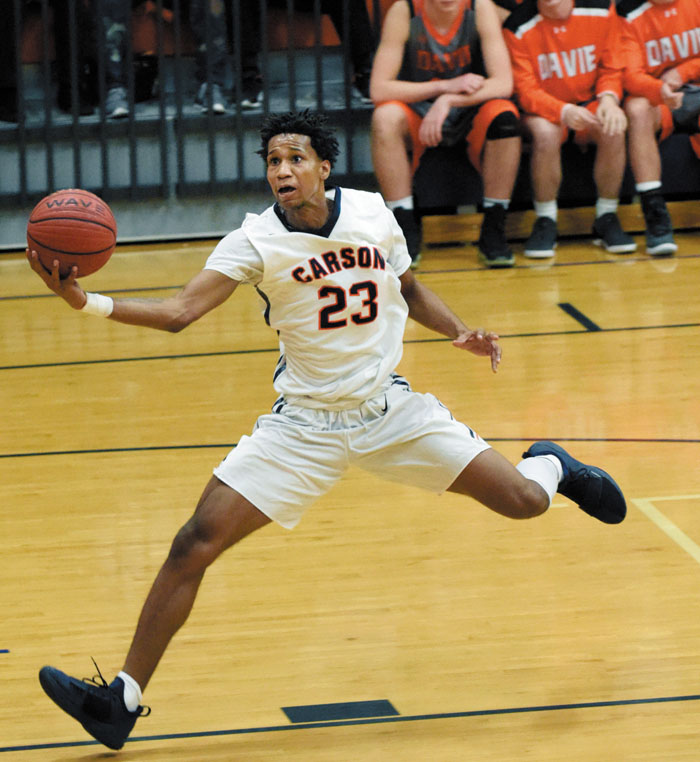 CHINA GROVE —Bad news for the rest of the Christmas tournament field — Carson’s boys basketball team may be even better than advertised.

No Rowan County team gets more miles-per-gallon than the unbeaten Cougars, who enter next week’s extravaganza as a top seed with a slight chip on its shoulder.

“I don’t know if we’ve reached our full potential yet,” senior Jamarius Hairston said Tuesday, after Carson stumped previously unbeaten Davie County, 77-61, for its ninth victory. “We’ve played some really good games against good teams. But after last year, we’re still taking it one game at a time.”

Last year’s runner-up has jingle-bell rocked its way to an impressive start — winning games at home, on the road and even a couple on Pfeiffer’s 94-foot court. None was more important than this one.

“It was a big-time game,” said Carson coach Brian Perry. “I think we really executed on offense tonight. We tried to run some sets and we got good looks and we made shots.”

“Michael did a real good job getting to the rim,” said Davie coach Mike Absher. “But we’ve got a lot of work to do. We have to make a conscious effort to get part of the paint.”

Both teams looked out-of-sync in the early going and combined for only three baskets in the first six minutes.

“Everybody was hyped up, probably some first-quarter jitters,” said Hairston. “We all knew this game was coming for a couple weeks.”

Carson caught fire in the second period, scoring 12 consecutive points and using a 15-2 spurt to open a 36-20 lead. Williams ignited the rally with a three-point play, a subsequent 3-pointer from the left side and a butterfly floater down the lane. Hairston followed with a stick-back and a brawny drive for a layup.

“We ran our transition, opened the floor and made plays,” said Williams. “It took a lot of effort, but it all starts on the defensive end. We knew the slightest mess-up on defense would be an easy bucket for them.”

Davie cut into a 14-point halftime deficit but got no closer than 49-39 when senior Cooper Wall converted a pair of free throws with 3:48 remaining in the third quarter.

“They were doing everything right,” Wall said after netting 15 points. “Both of us are very good shooting teams, but tonight was their night. Their shots fell and ours didn’t.”

A watershed moment came just seconds later, when Hairston took an over-the-top feed from Williams and scored on a powerhouse dunk.

“That gave us energy again … gave us confidence and got the crowd back into it,” Perry said. “It was a key play.”

It was. Hairston almost saw it as a knockout punch.

“Jailen does a tremendous job going to the glass and securing rebounds,” he said. “When I saw him grab it — and saw that the defense wasn’t getting back — I sprinted behind them. As soon as I got the ball, I knew what I wanted to do with it. Dunk it and put our foot on their necks.”

Carson’s lead bulged to as many as 20 points on two occasions in the fourth quarter, the last when Williams scored on a scoop layup with 6:56 to go. “They’ve got five guys who can score,” Absher said afterward. “Top to bottom, they’re a really good team.”

Carson will certainly be tested in the next week’s annual Christmas tournament at Catawba’s Goodman Gym.

“We’re going in as a No. 1 seed, but honestly, I don’t know if that really matters,” Perry said. “We just play to win — and by winning we got the top seed. All the teams in there are dangerous, man. There’s nobody that I can look at and say, ‘I want to play that team.’ Nobody.”

NOTES: Davie plays once more before the Christmas break, hosting Statesville Christian on Thursday. … Carson made eight 3-pointers — including four by White and another by reserve Cole Hales at the first-half buzzer. … Carson lost to West Rowan in last year’s Dale’s/Sam Moir Christmas Classic final.