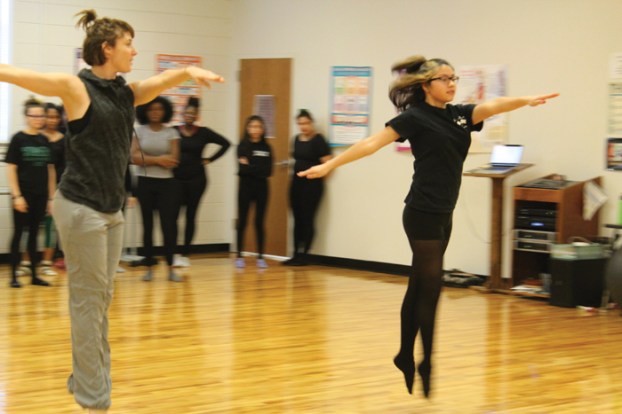 KANNAPOLIS — For Chryssie Whitehead, dance is a “gypsy art form.”

“You look at people and go, ‘Oh, I want to put those arms in my arms,'” she said. “Then you start to get better just by the people around you.”

Dance students at A.L. Brown High School were given the opportunity to test out the gypsy style Monday as Whitehead visited their class.

Whitehead has been working in theater, film and television for 18 years.

She started after high school as a Radio City Rockette. Afterward, she studied at the American Musical and Dramatic Academy, majoring in musical theater.

Since then, she has appeared in numerous Broadway productions and national tours, including “Cats,” “Company,” “Chicago” and “A Chorus Line,” to name a few.

Whitehead also appeared in the movie “Revenge of the Bridesmaids,” as well as in television shows such as “Grimm” and “Warehouse 13.”

With Whitehead as their lead Monday, three A.L. Brown dance classes went through warmup and dance numbers. The class ended with choreography from musical theater.

Whitehead taught the group Broadway choreography from the show “A Chorus Line” before sitting to visit and answer questions.

Many students wanted to know how Whitehead landed her roles on stage and in film. The key, she said, is working hard and persevering.

Whitehead told students to give every day their all. At some point and with tomorrow being uncertain, she said, all you have is today.

The Broadway performer met A.L. Brown dance instructor Ashlyn Keller-Silver when Keller-Silver attended one of her master classes. The pair said they bonded between their times together in New York workshops and a class Whitehead led at Charlotte Plaza-Midwood.

Whitehead said she was glad when Keller-Silver extended her an invitation. She has just moved to Asheville after getting married and will be teaching for Cherokee Central Schools in January.

“It’s exciting for me to be here to be working with this age group because it’s exactly what I’m going to be doing full time,” she said.

As she led classes Monday, Whitehead emphasized confidence and power. She told the students to not fear making mistakes.

“If you mess up, what happens? You keep going. You try again,” she said. “If you did it wrong, great, because we have to keep doing it wrong to get it right. … You just have to keep growing.”

Whitehead said she emphasized confidence and posture because of its benefit off the dance floor and in everyday life.

“Dance … gives people great presence and confidence,” she said. “Once they learn that they can do stuff like this in front of people, they’re not as timid.”

It also helps with their brains, she said, as learning dance combinations aids in memorization.

“Every human being could use performing arts. Doesn’t matter if they go off and do it, it’s not about that,” she said. “It’s more about just being able to have a conversation and communicate and talk, and that’s what performing arts does. It’s definitely going to help them a lot.”

The American Red Cross is sponsoring blood drives during a typically slow period for blood donations. Salisbury will have three... read more