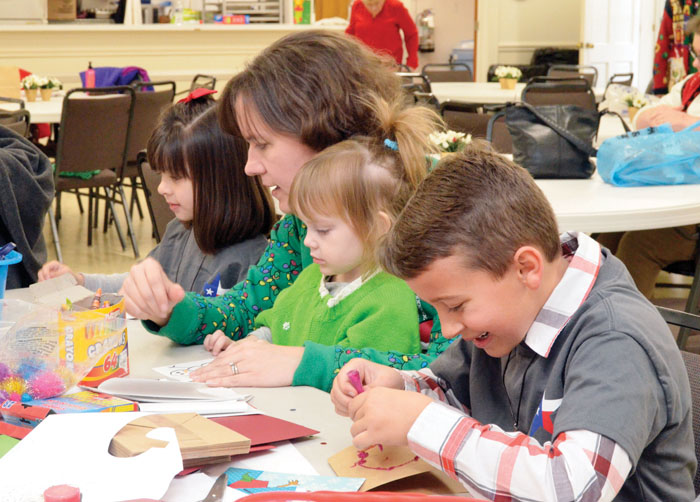 Lucia Steck, 5, left, Lydia Richmond, her daughter, Kate, 2, and Adam Swanson, 8, put finishing touches on their holiday cards. A group of children and their parents from Thyatira Presbyterian Church created holiday cards that will be sent to families in Texas. Youth leader Millicent Hoffner, not shown, connected with a Texas church to distribute cards to those affected by Hurricane Harvey. Shavonne Walker/Salisbury Post

SALISBURY — Adam Swanson placed his handmade holiday card on a table to dry after he’d sprinkled it with glitter and Elmer’s glue. The card will be given to someone the 8-year-old doesn’t even know in Texas.

Swanson, along with a group of parents and volunteers at Thyatira Presbyterian Church, spent Sunday evening making cards that will be given to victims impacted by Hurricane Harvey.

The Young Disciples of Christ group is made up of about a dozen of the church’s youth who once a month send handmade cards to the sick and others in the Millbridge community. In September, youth volunteer Millicent Hoffner connected with John Knox Presbyterian Church in Houston following the devastation of Hurricane Harvey. She wanted to reach out to a church that was hit and provide some help to them. The Salisbury church, located on White Road, is over 1,000 miles from the Texas church.

Hoffner’s contact at the Texas church told them they were not fully impacted by the hurricane, but there were other churches that were. Hoffner wanted to put smiles on the faces of those who’d lost their homes and belongings. She had her youth group send handmade cards.

They’ve mailed about 200 cards already and this Christmas are prepared to mail 100 to 150 more cards.

“I like to make friends with people. I really feel happy about making cards,” Swanson said.

He made three cards during an ugly sweater luncheon on Sunday following the regular church service.

Volunteer Carol King started the card ministry over 20 years ago and returned for the card-making session to make a few of her own. King, who is battling cancer, has been a recipient of one of those handmade cards from the children.

“I can’t imagine what they must be going through. How awful it must be to lose everything,” King said.

She said what the youth and volunteers of the church are doing is such a small thing, but it was something they delighted themselves in doing.

Hoffner said the church’s card ministry isn’t going to fix the problems that exist for the people of Houston to get their lives back on track, but it is a tool of discipleship for the children.

“It’s fun. You have to be creative,” Julian Steck said.

The 8-year-old made a few cards to add to the collection.

Emma Guy, 9, said she wanted to make a card to wish the people of Texas a merry Christmas.

Lucia Steck 5, said she’d made a lot of cards as well.

“It’s beautiful,” she said of the chance to make someone smile with a card.

Hoffner said after the holidays she plans to host a fundraiser so the children can help meet the needs of people in Texas.