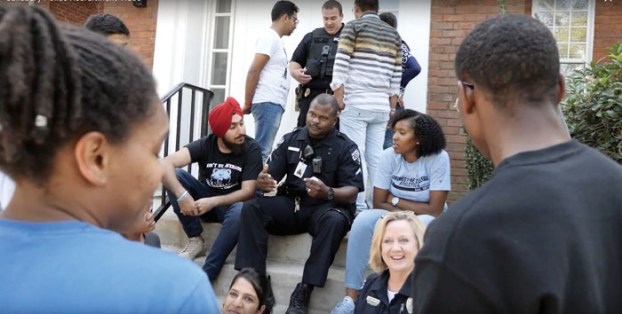 The department, in partnership with local videographer Joe Girdler and various other community partners, recently created the video, which can be seen on Facebook and the Salisbury Police Department’s website, http://www.salisburyncpd.org/. The video took two months of planning, casting, shooting and editing to create the nearly four-minute long video.

The video can viewed via the department’s recruitment page and it’s Facebook page where it’s received nearly 7,000 views and over 100 shares. It was filmed during the last week of September.

Beam, a sophomore public relations major at the University of South Carolina, said he took what was in his head and put it to paper. He drew a storyboard, which went through a series of revisions until they had a finished product.

The video begins with an aerial view of the police station, which was created using a drone and shifts to three patrol cars traveling in separate directions, lights flashing. About 21 officers appeared in the video and over a dozen civilians including some Salisbury residents.

The video also features a number of officers, members of the special response team and honor guard, Police Chief Jerry Stokes and local residents and was filmed in various locations throughout the city.

Beam, whose father is a detective, said many of his ideas are still featured in the video.

“Seeing it come to life is pretty cool,” he said.

He said it was a little daunting at first because he had to come up with an idea. He was a little anxious about what the officers might think of his ideas.

“I knew I had a great idea on paper,” Beam said.

He wasn’t able to participate in the filming because he had to return to school, but is glad that he could be apart of the making of the video.

Lt. Lee Walker, who works with recruiting, training and is over the fleet, said he asked for officers to volunteer and others he recruited who were featured in the video.

“They were on board right from the get-go,” Walker said.

Walker said they’ve already gotten calls from people who’ve seen the video and want to know more about applying. The video will also be played at recruitment and job fairs. It’s also been promoted via other social media sites including Twitter and Facebook as well as Access 16, the county’s local government access channel.

Patrol Officer Jay Basinger is just one of the dozens of officers seen in the video. He said it was a lot of fun to film, but nerve-wracking to learn to use a teleprompter to feed him his lines.

Each officer recites the department’s mission statement throughout the video. The officers actually read the entire statement and once it was edited several officers are seen saying just a portion of it.

Some Livingstone College students are also featured in the video. McElroy said they asked the college if they would participate and were met with a number of students who were there to be a part of the video.

McElroy said it was beneficial for the city to bring Joe Girdler in on the project.

Girdler said when McElroy approached him he didn’t hesitate to sign on to work on the project. Once everyone’s schedules permitted, they began filming.

“The city came with a script in progress; people lined up. The Police Department was great,” Girdler said.

He said his role was more shooting and co-directing. But he also helped them streamline the storyline for filming.

“It was a shared thing. I shot it, we all worked together. It was a great team,” he said.

Girdler said the police officers were great to work with and were so enthusiastic about the project.

To view the video visit the Salisbury Police Department’s recruitment page at http://salisburync.gov/Government/Police/Recruitment .

From sheep to sheepdog: Churches consider security in throes of holidays