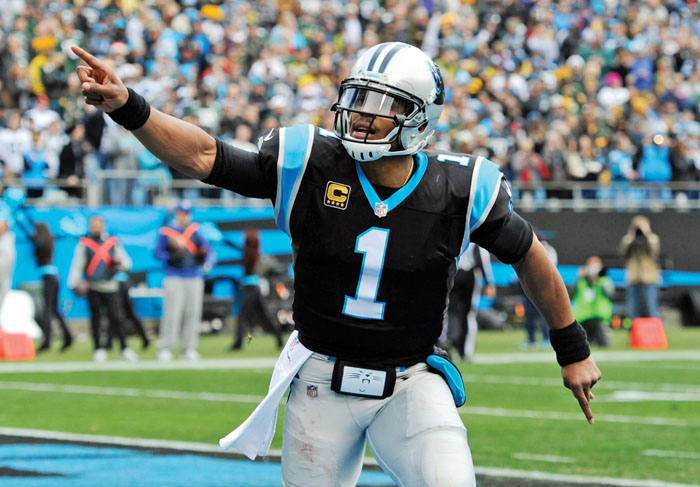 Carolina Panthers' Cam Newton (1) celebrates a touchdown against the Green Bay Packers during the first half of an NFL football game in Charlotte, N.C., Sunday, Dec. 17, 2017. (AP Photo/Mike McCarn)

After dominating opposing teams on the ground with three straight 200-yard rushing games at home, the Panthers turned to their 28th-ranked passing game on Sunday and took a big step toward reaching the postseason.

Newton threw for 242 yards and four touchdowns, and the Panthers spoiled Aaron Rodgers’ return from a broken collarbone with a 31-24 win over the Green Bay Packers.

Damiere Byrd had two touchdown catches, and Christian McCaffrey had 136 yards from scrimmage, including a 7-yard touchdown reception and the Panthers won their fourth straight at home.

Greg Olsen had his most productive game since returning from a broken foot, catching nine passes for 116 yards and a TD as the Panthers (10-4) kept pace with the first-place New Orleans Saints in the NFC South.

“It’s something we pride ourselves on being a complete offense, being able to run the ball when we can and pass when we can,” McCaffrey said. “Guys showed up and made plays today.”

That included Carolina’s defense, which forced four turnovers, including a strip by cornerback James Bradberry on Packers wide receiver Geronimo Allison with 1:28 to seal the win and prevent the Packers from possibly playing in their third straight overtime game.

“I need to do a better job of squeezing and securing it and there wouldn’t be an argument,” Allison said.

Rodgers, making his first appearance since Oct. 15, threw for 290 yards with three touchdowns but was intercepted three times as the Packers’ playoff hopes took a potentially critical blow.

At 7-7, the Packers are on the cusp of not making the playoffs for the first time since 2008.

Bradberry also had an interception of Rodgers, and said he plans to put the football in a trophy case.

“Going against him and getting able to get as many turnovers and we did puts a stamp on this defense,” Bradberry said of the Panthers, who have forced seven turnovers and had nine sacks in the past two weeks.

The Panthers trailed 14-10 at halftime, but Newton threw TD passes to Olsen and Byrd in the third quarter to give them a 24-14 lead.

Byrd’s first touchdown, a 9-yard grab in the back of the end zone , came with some controversy. The play was initially ruled an incompletion, but coach Ron Rivera challenged the play and officials overturned the call ruling that Byrd’s buttocks landed inbounds.

“Initially I wasn’t sure if they were going to count just one cheek or both cheeks,” Byrd said with a laugh. “I think I got lucky on that one.”

Packers coach Mike McCarthy said he didn’t have a problem with the decision, calling it a good catch.

Olsen was seen screaming at the Carolina sideline before the review, urging Rivera not to challenge the play because he was certain Byrd was out of bounds.

It didn’t help that Rodgers lost his most productive receiver in the third quarter with a concussion.

Davante Adams took a helmet-to-helmet hit from Panthers linebacker Thomas Davis on an interception return by Colin Jones. As Adams was running to make the tackle on Jones, Davis appeared to launch himself at Adams with a peel-back block, immediately sending the wide receiver to the ground and out of the game.

Davis was flagged for a 15-yard penalty.

Davis could face a fine or suspension from the league.

“I’m sure the league will deal with him accordingly to that,” Rodgers said.

Davis immediately realized what he had done, cupping his head in hands as he sat on the Panthers bench. Adams had five catches for 57 yards and a touchdown against the Panthers. Davis was not available for comment after the game.

After going 12 games without an interception, Panthers starting cornerbacks Bradberry and Daryl Worley both have interceptions in back-to-back games. Worley got Rodgers in the first half on a deep route along the left sideline, while Bradberry got one on an underthrown deep ball.