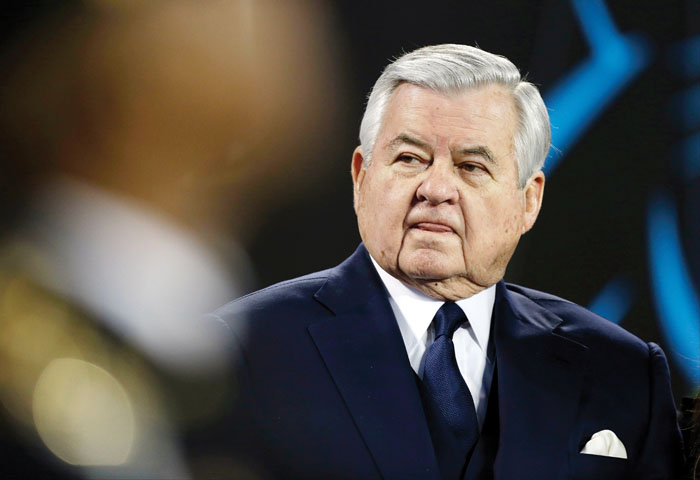 CHARLOTTE (AP) — Facing a growing investigation that accuses him of sexual misconduct and using racist language at work, Carolina Panthers owner Jerry Richardson announced Sunday that he will sell the NFL team after the season.

The team announced on Twitter that Richardson is selling the team, linking to a five-paragraph letter by the franchise’s only owner.

“I believe it is time to turn the franchise over to new ownership,” Richardson wrote, saying he wouldn’t begin discussions until after the season. The Panthers, who lost in the Super Bowl two seasons ago, are in playoff position again.

“I hope everyone in the organization, both on and off the field, will be firmly focused on one mission: to play and win the Super Bowl,” said Richardson, 81.

Richardson’s letter did not directly address the investigation or allegations against him.

The NFL awarded Richardson, a former player with the Baltimore Colts, an expansion franchise in 1993, and he has been the team’s only owner.

“There has been no greater mission or purpose in my life than to have brought and NFL franchise to Charlotte,” Richardson wrote. “The obstacles back then were significant and some even questioned whether or community could or would support professional football. But I always knew that if given the chance the Carolina would rise to the occasion. And you have.”

Richardson attended Sunday’s win over the Green Bay Packers at Bank of America Stadium and was photographed sitting beside his wife Rosalind in his luxury box.

He did not speak to reporters.

The NFL had no comment on the upcoming sale of the Panthers.

“While I will no longer be the team owner, I will always be the Panthers Number One fan,” Richardson’s letter said.

The Panthers are tied to Charlotte through June of 2019.

The city of Charlotte and the Panthers reached agreement on improvements for the team’s stadium in 2013. The plan called for the city to contribute about $87 million for renovations to Bank of America Stadium in exchange for a six-year hard tether to keep the Panthers in Charlotte.

The money is less than what the team was seeking for improvements of the stadium, which opened in 1996. Forbes estimates the Panthers worth at $2.3 billion. The Buffalo Bills sold in 2014 for $1.4 billion following the death of owner Ralph Wilson.

Richardson and his ownership group paid $206 million in 1993 for an expansion team.

Richardson’s announcement comes after a Sports Illustrated report Sunday that cited unnamed sources who said Richardson made sexually suggestive comments to women and on at least one occasion directed a racial slur at an African-American Panthers scout. The report states that the settlements came with non-disclosure requirements forbidding the parties from discussing the details.

The Panthers began play in 1995 but have never delivered on Richardson’s promise of winning a Super Bowl. They lost after the 2003 and 2015 seasons.

Panthers interim general manager Marty Hurney said he had never seen any evidence of Richardson displaying any sexual or racial misconduct in the workplace.

Panthers quarterback Cam Newton said after Sunday’s win over Green Bay that Richardson has served as a father figure to him since his arrival in Carolina seven years ago.

“For me I hope things don’t alter my thinking of Mr. Richardson,” Newton said. “But I do know that he has given me some things that I will forever be appreciative of.”

Panthers coach Ron Rivera said after the game it is important to let the process play out.

“The only thing I can speak on is for what he has been to me as far as I’m concerned,” Rivera said. “A lot of you know I had a house fire, and he was there for (my wife) Stephanie and I. He was tremendous in supporting us. My brother passed, and Mr. Richardson was there and helped me get to the funeral and back. I can’t speak to anything other than that.”

Richardson was hospitalized 2008, one month after receiving a pacemaker for heart problems. He underwent quadruple bypass surgery in 2002 and was placed on a donor waiting list for a new heart. He received the new heart on Feb. 1, 2009, and has not had any known setbacks since.