A jokester at heart, Rachel Graham Terry celebrates a century 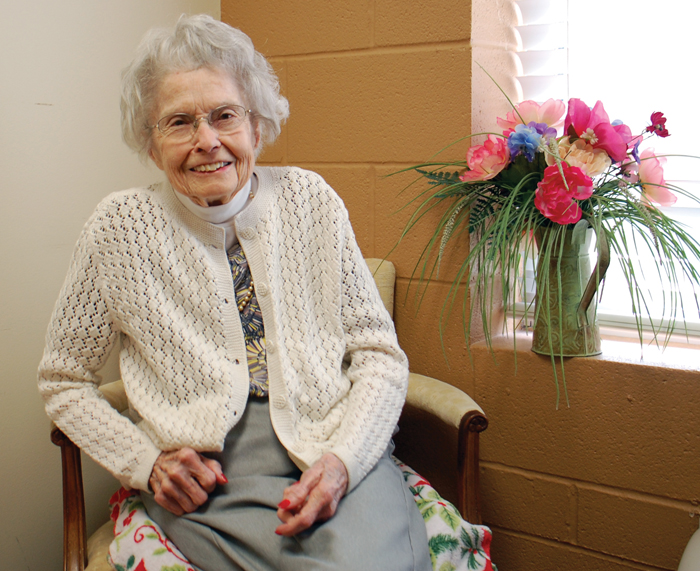 SALISBURY — When Rachel Graham married Tyson Terry Jr. in 1940, the newspaper account noted the bride wore a gold broach that had belonged to her great-great-grandmother.

It was a sentimental piece, the society page said.

The couple married at Rachel’s parents’ home at 217 N. Church St., a “jail house” holding many fond memories for Rachel and her four siblings. But more on that later.

In an unusual aside from its normal wedding report, the newspaper gave this description of Rachel, the 22-year-old bride: “She is one of the prettiest and most attractive girls in town.”

The same can still be said today, on the 100th birthday of Rachel Graham Terry.

For the past five years, Rachel has lived at the Trinity Oaks Rehabilitation Center. She’s in the center’s memory unit now, but that doesn’t stop her sometimes from touring town with her youngest brother, Tom Graham, when he travels in almost weekly from Gastonia.

As they drive through the downtown, Rachel still ticks off names of many of the old stores. They usually end up stopping for lunch at Richard’s Barbecue, where Rachel likes a barbecue sandwich and fries.

“When she walks in,” Tom said, “she doesn’t have to order because they’ve already written it up.”

For the record, Rachel lodged a mild protest and couldn’t understand why the newspaper would make a fuss about her 100th birthday. Her sister, Helen Rusher, was in the room, and she told Rachel, “This is history.”

“Some of it is ancient history,” Rachel said.

“She’s a pretty good jokester,” he said. “She comes up with some funny things.”

Some background is necessary to understand how close this family is.

Rachel was the second oldest of Alma and David Graham Sr.’s five children. Graham served as a Salisbury city policeman back in the 1920s, but when his double first cousin, Jim Krider, became sheriff, Krider tabbed David Sr. as his chief deputy.

When Krider was elected, he didn’t want to live in the house, but he thought it would be perfect for his chief deputy and family. Graham could oversee the jail, among his other duties, and Alma could look after the female prisoners and supervise the kitchen and pantry for both her house and the jail.

Trusties (prisoners with certain privileges) did most of the cooking for the jail and the Grahams.

“We had a real good cook,” Rachel said. She and Tom remembered one of the cooks as being a former head chef for Southern Railway who unfortunately had committed a major crime. Photo courtesy of the Graham family Rachel Graham Terry and the rest of the family of David Graham Sr. who was chief deputy for the Rowan County sheriff, lived in this North Church Street house in front of the old jail. The home’s kitchen was used by cooks for the inmates, as was a large pantry. The 1907 house, which stood between St. Luke’s Episcoal Church and an African-American Presbyterian Church, no longer stands.

The Grahams had earlier lived on South Fulton Street, and Rachel attended Wiley Elementary. They moved into the North Church Street home in the late 1920s or early 1930s and would stay there until 1957.

Their children included Mary Krider, Rachel, David Jr., Helen and Tom, who would be born in the Church Street home in 1935.

Tom is younger by 18 years than Rachel, and he likes to say he had many mothers when you add in his three sisters.

Helen Rusher protests today when Tom tells people he was born in jail (the North Church Street house) and later went to reform school (Catawba College), since Catawba had a strong connection to the Reform Church.

Their house was a great place to live, the three surviving siblings acknowledge. “The rooms were spacious,” Helen said. “It was lovely, well-built.”

“It was just home,” Rachel added.

The house relied on steam heat, like the jail, but it also had a fireplace and marble mantel in every room.

The ceilings were 12 feet high. Three big bedrooms were on the second floor — one each for the parents, girls and boys.

“I would look out at night and see the Sheriff’s Office,” Rachel said of the view from her bedroom window.

The house had a nice front porch. Their family dog, which also patrolled the jail, was named Danger, and he wasn’t adverse to biting people who leaned too far into the fence around the jail yard.

Tom remembers his dad crying when the 16-year-old Danger died.

Rachel said trusties in good standing were allowed on Saturday nights to leave the jail and take a stroll down Easy Street. They would return and pass their remaining time of freedom on the courthouse steps before having to head back to the jail.

The jail was segregated back then. Upstairs held the white inmates; downstairs, the black prisoners. It had about a 50-person capacity. Photo courtesy of the Graham family The family of Alma and David Graham Sr. posed for this photograph at their North Church Street house, which stood in front of the old Rowan County Jail. Rachel Graham Terry, far right, will mark her 100th birthday Monday. Her siblings in the photo include Tom Graham in front, Helen Graham Rusher (far left), David Graham Jr. (back center) and Mary Krider Graham Lane (next to Rachel).

Though it wasn’t your typical home, the Grahams made it exactly that. Tom remembers the time David Jr. was home from the war and they were playing baseball in the front yard with their dad. Tom was only about 10.

During their impromptu game, David Sr. knocked the ball toward the African-American church and broke a stained glass window. By the next day, their father was making sure the window was being repaired.

The late David Graham Jr. is still familiar to many Rowan Countians from his days as a state revenue agent and general manager of the Rowan County ABC stores.

Tyson Terry, the man Rachel married, joined the Sheriff’s Department as deputy in late 1936 and became a fingerprint expert. He later would become a special agent with Southern Railway.

Rachel went on to attend Boyden High School and Salisbury Business College. When she and Tyson married, she was working in the office at Carolina Tractor.

During World War II, Tyson served in U.S. Navy Intelligence for almost three years. He was in the identification section, working so long under blue lights that he almost went blind, Tom Graham said.

For most of the war, Tyson worked out of the Pentagon in Washington, D.C., so he and Rachel lived in Arlington, Va. Tom and his mother once traveled by train to see them.

The Terrys had two sons. Samuel lives in Maryland, in an area close to D.C. Robert, who lived in Salisbury, passed away a couple of years ago.

After the war, Tyson Terry continued working for the railroad before taking a job as a Rowan County magistrate for 12 years. He died in 1993.

The couple lived for a long time on Maple Avenue.

In the Graham family, Rachel is known as a talented seamstress. She said she learned how to sew from her mother. She has attended Second Presbyterian Church her whole life and for much of her work career, she headed the admissions office at Rowan Memorial Hospital.

Rachel has reached the age of 100 without any major health issues and claims no personal secrets for reaching the century mark.

When you reach 100 years old, the people helping you and coming to visit are always asking how you’re feeling. Rachel has a pretty good answer for them.

Still funny. Still one of the prettiest girls in town.