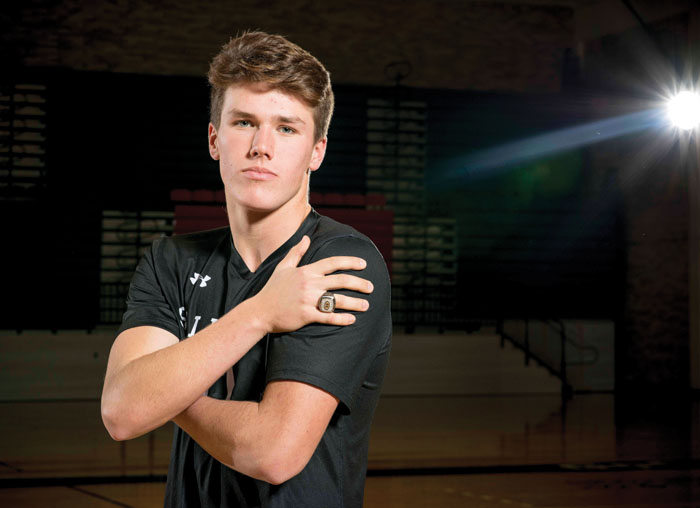 SALISBURY — Matt Parrish had an early-August decision to make — and it wasn’t like choosing between fries and rings.

The adroit Salisbury boys soccer coach needed a dauntless goalkeeper and a take-charge center back to anchor the Hornets’ 2017 defense and found himself with an unusual dilemma: determining how to optimize the tandem of Jack Fisher and Josh Faulkner.

“As a coach, it was actually a nice problem to have,” Parrish recalled. “Both have been alpha dogs their entire lives. And surprisingly enough, they both jumped at the chance to not be our goalkeeper, but our versatility was best served with Josh in goal and Jack in the field. Now, it’s a no-brainer.”

Fisher emerged as a 6-foot-2 state trooper on the back line, fortifying a defense that yielded 25 goals in 22 matches and blanked six opponents. He was named the Central Carolina Conference’s Defensive Player of the Year and selected to the all-Region VI team. A year ago, as a sophomore keeper, he earned all-county, all-conference and all-region honors. With a resume like that, being named the Salisbury Post’s Player of the Year may seem like small change.

“Not at all,” Fisher said before a recent photo shoot at Goodman Gymnasium. “I think it’s a really cool award to win, especially since our conference was so tough this year. I have to thank Parrish for giving me the opportunity. He’s the one who got me to play with heart.”

Fisher contributed five goals and 16 assists for the 13-7-2 Hornets, but his value went beyond the margins. Whenever Salisbury needed a booming free kick from its own half, he was summoned to ignite the offense. If an attack-zone throw-in was called for, he’d jog to the sideline and launch one of his Ruthian feeds. Oh yeah, and he spent three matches tending the SHS goal while Faulkner recovered from an early-season knee injury.

“We ended up losing one of them,” Fisher said. “But it was fun to go back in goal and do what I had done the year before. I made a few saves, let a few by that I shouldn’t have. I love being a goalkeeper, but playing center back is such an awesome chance to be involved in practically everything that happens on the field.”

It’s where he left his signature this season. Fisher’s 30-yard throw-ins were the stuff of legend, often leading to bang-bang scoring plays.

“His defense was very important to the team,” said Salisbury midfielder Luke Holland. “He wins everything in the air. But his throw-ins gave us the opportunity to have set pieces. I might have had two or three goals that weren’t set up by Jack Fisher throws. Everything else came from him.”

And much of it was by design.

“That was pretty much the game plan,” Fisher said. “We were a physical team that liked to get after balls. So any throws inside the last quarter of the field, I’d be asked to take them and try to place it inside the box. We found a lot of success off those set pieces. My teammates were so good at finding the ball out of the air and finishing.”

As for Parrish, Fisher’s exploits helped him earn the county’s Coach of the Year honor. He steered Salisbury past a dismal 1-5-1 start and into the 2A state playoffs.

“That’s a reflection on the team and the players I had,” he said. “When things go well, it’s usually because of them.”

Perhaps, but Parrish was the sagacious leader who made that all-important, pre-season decision.

“Having a goalkeeper involved in field play set pieces helped us be successful,” he said. “Jack always seemed to know what to do. He knew situations, knew where to put the ball, knew goalkeepers’ tendencies. Looking back, we had nothing to lose. That decision really worked out for us.”