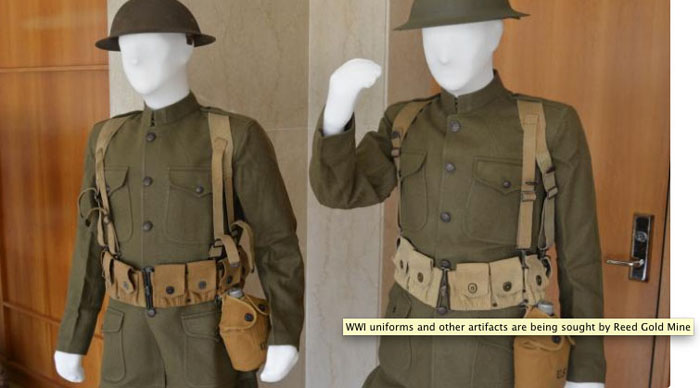 MIDLAND — From April 1- May 30, 2018, Reed Gold Mine will host a traveling World War I exhibit as part of the 100th anniversary statewide commemoration of the war. Here’s your chance to help reflect that history. Reed is seeking original period artifacts from 1914-1918 related to Cabarrus County towns and surrounding counties. Reed will return all artifacts loaned.

Reed seeks original World War I uniforms, weapons, home front items (original newspapers, magazines, war loan and rationing material) or other related items to be loaned for the duration of the exhibit. Some paper items may be copied for display depending on condition, and potentially for educational purposes.

Any family history or information about items (such as names of those who wore a uniform) would be very valuable to create text for the exhibit. All donors will be required to sign paperwork for the loan of items, and again upon return. Loaned items will be returned when the exhibit closes.

Beyond sending young men to Europe to fight the Axis nations, World War I affected North Carolina in many ways. War Loan drives were held to raise funds for equipment and ammunition, scrap drives were organized to reclaim vital metals used in the war effort, and items were rationed to supply the troops.

Reed Gold Mine preserves the site of the first documented discovery of gold in the United States.  Restored mine tunnels are shown to visitors by interpreters who share the story of that first discovery and the work of the miners to retrieve gold. Reed Gold Mine further interprets the history of North Carolina’s mining heritage through exhibits, special events and off-site presentations.

For additional information, please call 704-721-4653 or email reed@ncdcr.gov. Reed Gold Mine is located   at 9621 Reed Mine Road in Midland, N.C. It is 12 miles southeast of Concord, 25 miles east of Charlotte and 18 miles west of Albemarle. Reed is part of the Division of State Historic Sites within the N.C. Department of Natural and Cultural Resources.