My Turn, Patrick Coleman: What the loss of net neutrality could mean for you 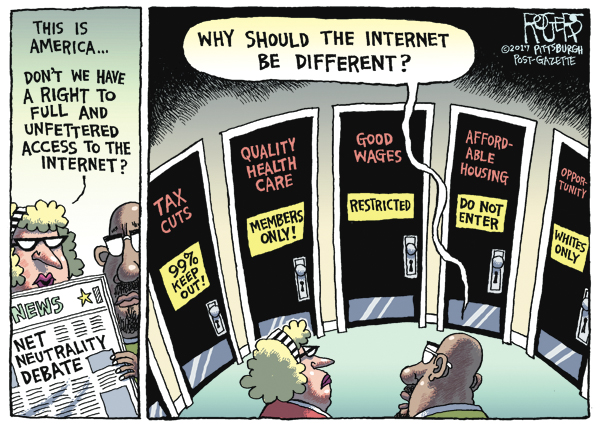 Last Thursday, over the objections of more than 85 percent of the population, and with the support of our North Carolina senators, the FCC voted to repeal net neutrality. The committee of five voted across party lines, with the three Republicans voting in favor. The prevailing argument from FCC Chairman Ajit Pai was that net neutrality imposed “stifling governmental regulations,” but that argument doesn’t hold up to scrutiny.

First, some background. In May of 2012, Pai, a former Verizon executive, was appointed to the commission by President Obama on the recommendation of Mitch McConnell, the current Republican Senate majority leader. In January 2017, President Trump promoted Pai to FCC chairman. One of Pai’s stated goals at the outset was to eliminate the Open Internet Order, which regulated internet service under Title II of the Communications Act of 1934.

In the early days of the internet, there was no real reason to enforce neutrality. By the early 2000s, as high-speed internet became the norm, the FCC assumed that internet service providers (ISPs) would avoid actively discriminating among traffic. This turned out not to be the case, as ISPs were found to be choking streaming speeds and blocking access to certain content.

When Obama first took office, his FCC created the Open Internet Order of 2010, which prevented ISPs from these practices. ISPs sued, arguing that the FCC had no right to regulate them because they were not common carriers, and the courts agreed. So in 2015, the FCC classified ISPs as common carriers, determining that our internet “backbone” was similar to our telephone infrastructure.

The Open Internet Order of 2015, among other things, established three rules: ISPs could not block legal content, throttle internet speeds, or offer paid prioritization that favored certain services or content. This is the total opposite of “stifling,” as it ensures that every site on the internet is treated equally in terms of access.

With all of that in mind, here’s what the repeal could mean for you: your internet service provider is now free to block access to content they do not agree with, change your streaming speed based on the sites you visit, and charge extra for the ability to access popular sites such as Netflix and Facebook.

Remember, too, that all of these telecommunication companies are intertwined. Comcast/Xfinity, one of the largest ISPs in the country, owns NBC News. Thanks to Thursday’s vote, Comcast can now put NBC News’ website in the “fast lane,” making sure it loads faster than Fox News’ site. They could even block access to Fox entirely if they wanted to, or make customers pay more to see it.

In the months leading up to the vote, ISPs such as Comcast and Verizon assured us that they have no intentions of doing any of these things, yet they spent millions of dollars lobbying for the repeal. And we all know that corporations love to spend money for things they’re not going to do.

Sen. Ed Markey of Massachusetts has announced plans to introduce a resolution against Thursday’s vote under the Congressional Review Act, which allows Congress to override any federal regulatory action within 60 days. If you use the internet for business, if you have a Facebook account, if you binge-watch Netflix, I urge you to contact Sens. Richard Burr and Thom Tillis. Tell them you disagree with their support of the net neutrality repeal, and ask them to join Senator Markey in reversing it.

Patrick Coleman is a resident of Salisbury.