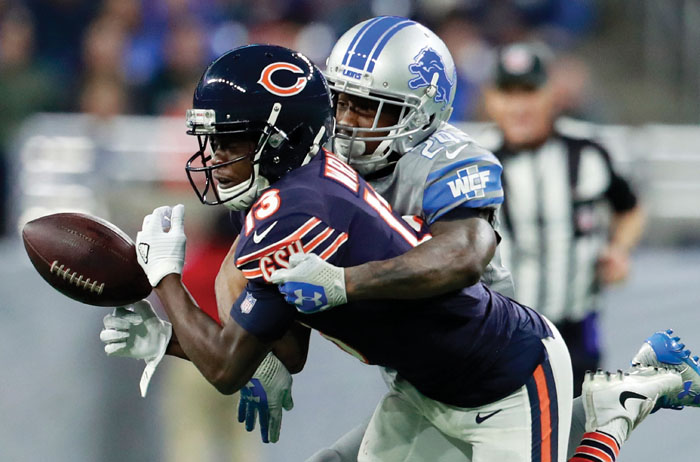 DETROIT (AP) — The Detroit Lions came up with a scheme to shut down Chicago’s running game and force Bears rookie quarterback Mitchell Trubisky to throw a lot.

Chicago averaged less than 3 yards a carry and Trubisky threw three interceptions Saturday night, setting the Lions up for a 20-10 win that keeps them in the playoff picture.

The Bears ran for a season-high 232 yards in their last game, a 33-7 win at Cincinnati, and had 222 yards rushing in a three-point loss to Detroit last month.

“We came out and punched them in the face,” Detroit cornerback Darius Slay said. “That was the difference.”

When Detroit narrowly escaped the Windy City with a win, Jordan Howard had 125 yards rushing and a score.

In the rematch, he was limited to 37 yards on 10 carries and that played a part in the Bears being forced to try to move the ball through the air a lot.

Trubisky had season highs in completions (31), attempts (46), yards passing (314) and interceptions (three) including two to Slay and one to safety Quandre Diggs in the end zone early in the fourth quarter.

“Last week we had a little juice, executed, had things rolling,” he said. “It seemed like the opposite.”

Here are some other takeaways from Detroit’s win:

The Lions (8-6) need to win their last two games, at Cincinnati and against Green Bay, and will need some favorable results by other teams to earn a second straight and third playoff appearance in four years. Carolina (9-4), New Orleans (9-4) and Atlanta (8-5) are all ahead of the Lions in the NFC playoff race, and they all beat Detroit to own a potential tiebreaker.

“What we did this week won’t matter if we don’t win next week,” Detroit receiver Golden Tate said.

Fox was questioned about an eyebrow-raising decision in each half. He punted on a fourth-and-1 from the Chicago 45 early in the second quarter, trailing 6-0.

“It’s not a no-lose situation because if we don’t make it, they’ve got the ball at our 45,” he said. “Like I said, you could go for it, but you have to know that it can come back and bite you.”

After Trubisky threw a 9-yard touchdown pass to Benny Cunningham to make it 20-10 with 2:32 left, cutting Chicago’s deficit to 10, Fox chose not to try an onside kick.

“We knew we had to score twice,” Fox said. “So, we felt we could stop them, score and then go for the onside kick the second time. That’s how you generally play that.”

Matthew Stafford, who threw two touchdown passes, completed 25 of 33 passes for 237 yards without a turnover. He connected on 76 percent of his passes after having an 82-percent completion percentage over the previous two games.

“He’s been on a tear lately,” coach Jim Caldwell said. “He’s been playing well for a while. He hangs in there, delivers the ball. He’s got some receivers making plays for him, too.”

“Some of it was some new guys in because of some guys lost,” Fox said. “That’s not an excuse. It’s just reality.”

Slay had two interceptions, giving him seven this season to surpass his previous career total of six from his first four seasons in the league.

“I’ve been supposed to make these kind of plays,” he said. “At times in my career, I was knocking them down. So, I’m just going for the pick.”