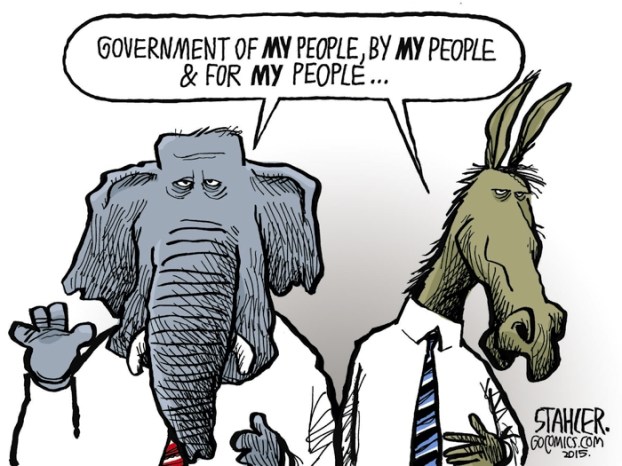 Larry Efird: Avoiding the truth — and the labels

We’ve often been told there are two topics we should avoid discussing with people we don’t know very well: religion and politics. I’ve always regarded that as sound advice, but sometimes I can’t help myself.

I understand why we shouldn’t talk about those subjects flippantly because they are, after all, more personal than the weather. They reveal perhaps our deepest thoughts by allowing someone to look inside our soul, not just at our face.

No one is going to shun me because I don’t think it’s going to snow if the sky is gray and it’s cold outside. And I’m not being harsh or judgmental of someone else’s view of the weather by expressing my own.

But the moment we make a personal statement about Washington — good or bad — we must be willing to verbally defend ourselves, and the way things are going, maybe physically too! And if we should contribute our opinion regarding a religious conviction, heads may potentially roll, depending on the topic and the setting.

I know teachers who hesitate to share any personal opinions with their students because they want to keep a “professional distance.” I get that. But I also know adults who never share their honest feelings for fear of rejection or fear of acknowledging the truth. Or maybe even because if they did admit how they really felt, they wouldn’t like themselves too much. That’s why thinking is oftentimes painful. But it’s necessary for good mental and spiritual health.

When students ask me penetrating questions, I long to be honest, but I also have to be guarded for legal reasons because I cannot take on the role of proselytizing. It’s not my job.

But I also don’t want to lie to them or be evasive if my understanding might help them become more honest with themselves in an increasingly dishonest world. Each word has to be spoken guardedly, however, much like taking calculated steps on an icy sidewalk.

In a recent lesson on eponyms, students easily understood how a person’s name can become associated with attributes and character traits. Everybody knows that Hitler is another term for evil the same way they know Santa Claus is a name which evokes thoughts of good deeds and jolliness.

If I could only think of Bob and Elizabeth Dole when I think of Republicans, I wouldn’t mind being called one. If Jimmy Carter were the face of the Democratic Party, that wouldn’t be such a bad label either. Regarding my religious persuasions, if being an evangelical Christian were synonymous with having the faith and character of Billy and Ruth Graham, that description would also be an honor.

But today the lines are blurred. There was a time in my life when I was not embarrassed to be known as a Republican and an evangelical Christian. But not any longer. Both terms now have dubious connotations. And the saddest part of all is that unknowing people think those two terms are somehow synonymous.

(The word “publicans” is in the Bible, not Republicans. But just for the record, they weren’t good people.)

Students will often ask if I’m a Republican or Democrat. I tell them I want to be known as an American who supports all people and a person who votes for the best candidate regardless of his or her political affiliation.

When they want to know my religious persuasions, I would rather be known as a “follower of Christ.” If I told them what church I go to, that would have the same effect as telling them what credit cards I have in my wallet or if I am a member of Sam’s Club or Costco. So what? Kids today may be into fashion labels, but they’re not into labeling people.

No political party has a perfect platform, and no religion has perfect followers. We all have our convictions along with our flaws, but in America we all have the right to follow our dreams — and our consciences within the law. But when it comes to speaking up about religion and politics, maybe we should examine if our thoughts are going to help others or hurt them. That’s a topic and a truth we can’t afford to avoid.

Letter: Something cheerful for Christmas

About 42 years ago, I went Christmas shopping with one of my cute little nephews. As soon as we went... read more